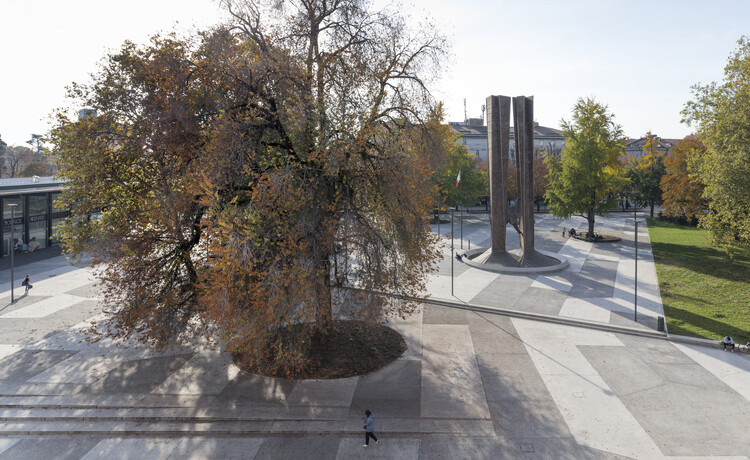 Text description provided by the architects. The redevelopment of Piazza degli Alpini was carried out by Studio Capitanio Architetti and Osa Architettura e Paesaggio on behalf of Bergamo Municipality between 2018 and 2020. It is at the centre of the redevelopment of public spaces, which defines the city in a period of urban regeneration. This limited budget project recovered the collective dimension of the largest open space in the city mitigating the long-standing social issues that affected this central area, which was frequented by individuals at the margin of society and indifferent passers-by hurrying along. The square is barycentric between the 1900s central system by Piacentini and the wide expansion of Porta Sud.

It is positioned along the historic avenue originally known as Viale Ferdinandeo, enriched by majestic trees and the monument to the Alpini (Alpine Corps), created in the 1960s, designed by Architect Gambirasio. The new square is imagined as a wide, freely accessible expanse able to re-establish for this space a new sense of belonging to the city. Open spaces and safe, free views allow the enactment of new collective urban behaviours such as events, open-air cinemas, temporary displays and local markets.

The global view of the square invites the interest of the passers-by, it increases comfort, security and control. To direct visitors towards the centre of the square rather than the margins, the difference in levels towards the sides of the square is overcome using a careful compositional arrangement that creates a ramp and stairs. These architectural elements qualify the space recalling the diagonal generated by the original course of two canals now interred, Roggia Nuova and Roggia Morlana.

The flow of pedestrian traffic, generated in the main by a number of nearby schools and the railway station, took a central role in the regeneration of the space and were investigated to invite constant movement across the square throughout the day, including access to users with a disability. Paving is defined as an urban carpet, a Terre minéral, enhanced by alternating sections in polished and exposed concrete, that highlights the aggregates from local gravel quarries in the Orobic region.

The "brutal" character of the material is accompanied by the fine geometrical design of the paving interspersed with metal joints and linear fissures for the collection of rainwater. The trees are directors, custodians and great actors in the square. The vegetation, ancient and luxuriant, is defined by century-old trees, imposing specimens that go back to the 1920s. Among them several Ginko Biloba stand out, living fossils that find their origin in the Permian period, approximately 250 million years ago.

Their beautiful bilobed leaves paint autumn days and, once fallen, the pavement with their intense yellow. To showcase the great and prized historic trees, some younger specimens were moved to other parks in the city. At ground level, the trees define circular flower beds describing the projections of their crowns. These are at times embraced by original-design benches made to be shared. 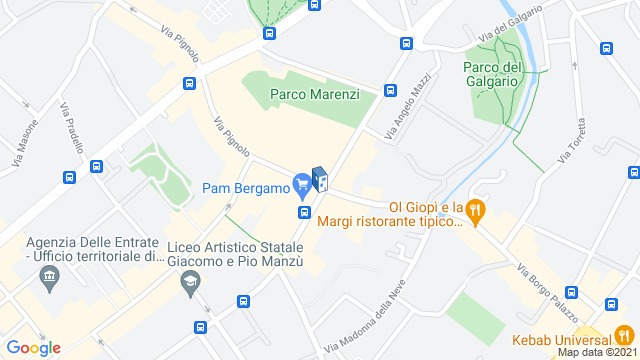 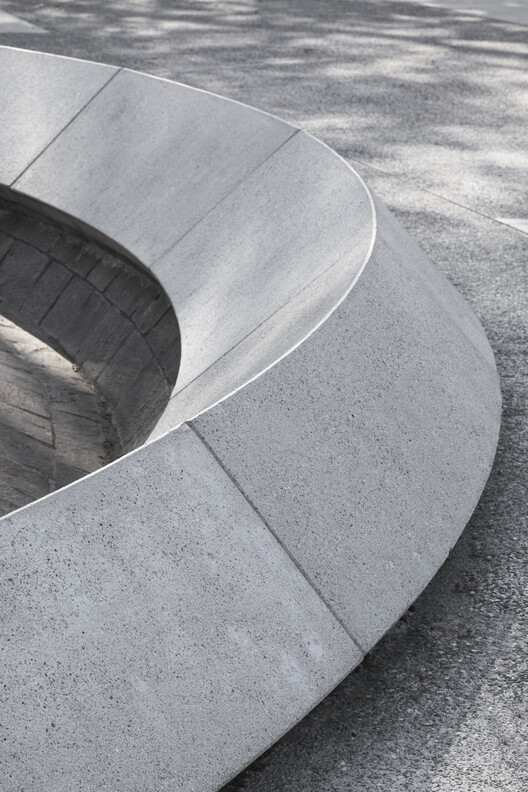 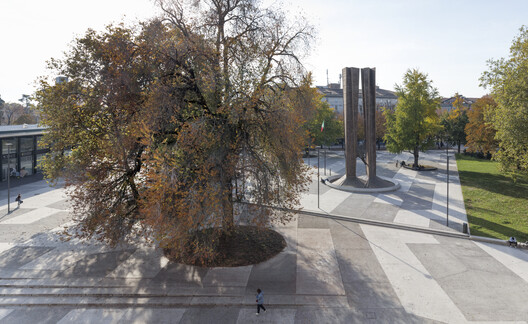