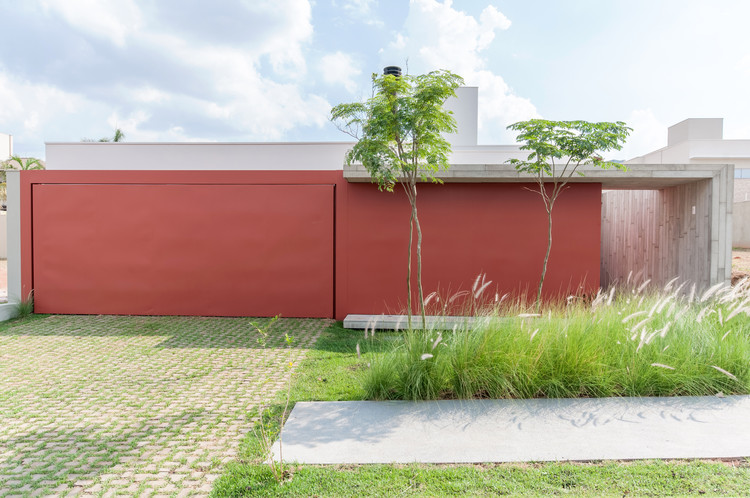 Text description provided by the architects. Located in a gated community in São José do Rio Preto (São Paulo, Brazil), this house is the result of the work carried out by Studio Luiz Veneziano de Arquitetura. The project sought to solve the challenges proposed by its future owner: an uncluttered program, no excesses, a low-maintenance house, but which also incorporates outdoor spaces, perhaps as a large terrace, where they could comfortably host friends and relatives – and all this within a limited budget. The proposal intelligently integrated the indoor spaces with exits to the outside part of the house, making the most of natural light and ventilation.

The large spans and integration of all common areas, only possible due to the large aluminum and glass doorwhich slides into a hidden niche on one of the sides, eliminate the need for an external terrace, for example, considerably reducing the size of the house. Hence, enough room was left for the garden in the central courtyard, where a jacuzzi was installed.

The garage attached to these environments can also be used as an extension during gatherings. "The house has no living room, dinning room or kitchen. It is a large terrace that includes all of these spaces", according to the architect. The architectural concept of open spaces was also applied in the owner's suite, where the closet and part of the bathroom (the washbasin countertop) integrates into the bedroom, making everything wider and airy.

In the living and dining rooms, the wall that goes all the way to the entrance hall receives zenithal lighting. There, a nearly-15-meter-long sideboard was installed, where the TV equipment, books, and picture frames may be placed, and which may also be used as a bench.

The furniture was acquired at a local industry, where they demonstrate expressive curatorship of new talents of the Brazilian furniture design scenario.

The house is almost all white, both indoors and outdoors. Breaking up with the white, only some areas were coated with precast strips of apparent concrete, such as the sidewall of the inner courtyard, which merges into the living room, and the elements that make up the main entrance. The garage door, the entrance doors, and the rest of the façade was covered with rust-paint-effect carbon steel, giving extra personality to the design. The house stands out from the others in the gated community.

The kitchen joinery is a highlight of the design. It was conceived as a “box inside of the box”, that is, it is where most of the cupboards are, and it also sets the limits of the area of the entrance hall.

The result is a composition of simple and minimalist lines, a striking feature of the architect's works.