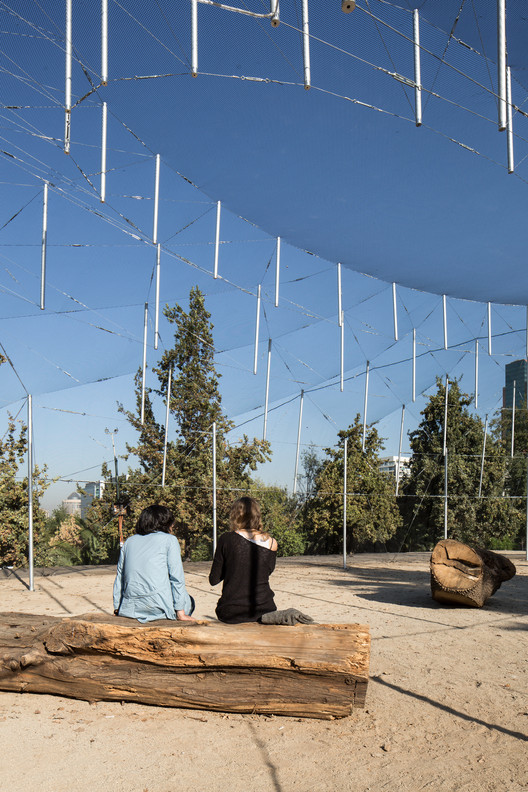 The History of a Pavilion
For 7 years, once a year, the construction of an unprecedented place has been celebrated in Santiago de Chile. These places come and they go. Truckloads of dirt, bundles of wicker, live corn plants enter and leave the park Parque Araucano... Nobody knows exactly what is hatching but it is certain that once again the park will surprise the visitors with something new.

The pavilions are a kind of festivity. A celebration of summer, the park, life in the city, the supposed prosperity of the country and of architecture. It is a summer dream. But where do all those beautiful ideas that once filled that void go? We are faced with an architecture of accumulation. The images overlap each other. In this scenario, the images are stronger; they endure, but architecture as such is imperishable. We recognize that this is a core disciplinary problem. With this in mind, we worked with the definition of the pavilion as an object autonomous of its final image.

Dismantlable Condition
The opportunity granted by the Y.A.P. Constructo is an instance in which time, work and resources are invested that we believe should bear fruit beyond the commission itself. We are concerned about the lifespan of this initiative.

The dismantlable and durable condition of the structure allows to extend the scope of this initiative. It wants to conquer new and remote places to provide a space for encounter and gathering. In this way, the new body has autonomy regarding the commission, its manufacturing time, the place where it is located for the first time and its authors; It is an autonomous body.

Curiosities
It seeks to value the place with a series of events in an already consolidated park and to complement it with a singular, fragile, light and translucent object. A stable and resistant body, still being an alien artefact, a curiosity.

Buckminster Fuller's research and the artist Gego's plastic explorations generate liquid objects; an air mass based on small pieces that make up a whole and remind us of the potentiality of these structures that are reinterpreted to generate an incredible spatiality due to their density and slenderness of elements. The methodology of applying these principles from the '60s is based on a series of obstructions, a set of rules that allowed us to adapt a theoretical model to local technology and manufacturing. The deployable structures by Pérez Piñeiro are an invitation to achieve assemblies in the blink of an eye. On the other hand, the exercises of inflatable structures of the 60s and 70s show that the configuration of empty space - or air - is one of the central themes of architecture. And finally, Kenneth Snelson's research shows the development of components and pieces that, although belonging to the world of engineering, are also art, and why not architecture as well.

Lightness and Tension
The domed structure is configured by a suspended void of slender elements that float in the air. It has an ellipse-shaped floorplan inscribed in a rectangle. It is a dematerialized vault 36 meters long, 16 meters wide with a total height of 6 meters. The centre of the enclosure is freed and the supports are located in the perimeter. The passerby looks up and in surprise; trying to figure out how a system like this works, in which nothing touches and everything floats.

The tensioned dome system is a progressive structure that is lightened towards the upper ring until the weight of these isolated parts is reduced to the minimum. Its shape is given by the repetition of a system of rules that give rigidity and coherence to the structure of compressed elements - pipes - and tensioned elements - cables. The system is made up of 5 layers, each one with tubes from 1 to 3.6 m long. These tubes support the compression loads of the framework and are held in a vertical position thanks to 3 to 6 mm thick cables that operate under tension.
Both elements are found in a terminal node at the upper and lower end of each of the tubes, designed for each type of bar. All the elements that make up the frame are industrial materials available on the market, with the exception of the terminal node of each bar and the steel bases of the tubes that reach the ground (simple support with pegs).

A Lounge in the Park
The place is Parque Araucano. At times it is a square, at times a true urban park with recycling, parking, a mall, a skyline crowded with buildings. Faced with this diversity of activities, the proposal inserts a new interior space in the operation of the park; a lounge. This place is closely related to the outside world since it takes advantage of the summer and its benefits; being an escape from the sun during the day and an illuminated dome during the night.

A versatile interior, an empty space, "where the content is the container". 500 m2 to accommodate endless situations; a place for spending time and to gather, for musical events, seminars, parties and workshops. There is no front and back, there is no "backstage" or hierarchies. It is a single space in which spectators and actors inhabit the same place. The floorplan is axially symmetrical, a single space without divisions that contains two specific openings that mark the entrances.

Prototypes, Prefabrication and Assembly
The research was conducted based on empirical tests with prototypes of different scales. Scale models of 1:50, 1:25, 1:10, 1: 5, 1: 2 and finally 1: 1-, in multiple materials that allowed testing different themes that deepened the investigation: (a) the structural capacity and the sequence assembly, (b) spatiality, (c) the number of elements that made up the pavilion, their dimensions, materiality, etc., (d) the quality of the mesh or surface that encloses the void with respect to its colour, opacity, elasticity and appearance, and finally (e) the content of the vault, its furniture or exhibitions.

The construction process began with the prefabrication of the parts that make up the whole for their subsequent assembly. The search for the materials was guided by an ability to be dismountable and durability during transfers, in addition to having the required resistance capacity. Aluminium turned out to be a great material for the tubes of 2 to 3 ”in diameter because it allowed being handled by a single operator. Steel was chosen both for the cables (3 to 6mm) and tensioners, allowing precision and structural resistance; leaving the process on the site with a minimum margin for adjustment and assembly times. The end pieces that join both elements are made of duralumin, which allowed a particular turned piece for each joint with sufficient structural capacity to resist structural demands. All the pieces were moved by a simple truck and one by one they were assembled on the ground in a systematized sequence but not devoid of surprises.

The Dress
We are excited that the structure in its "naked" state - devoid of program and location - acquires these characteristics based on the dress that complements it - gala, informal, summer or winter. Shade, light, water and furniture give versatility to the structure and allow to imagine new and varied assembly scenarios.

On this occasion, it is made up of a translucent mesh that covers its body and disappears in the frontal view, while when foreshortened it acquires a more dense appearance; accentuating the ambiguity between the interior and exterior space. It is refreshed by the light shade of the lattice, the wind and the water in the form of a cool breeze. A series of water vaporizers at the height of the body is activated intermittently, tempering the place during the day as a shelter from the strong summer heat.

The logs, as somewhat exotic furniture, rough, large and as ruins of a natural landscape work in contrast to the artificial, light and itinerant scenery that contains them. The logs, living and dead at the same time, weigh everything that the structure does not.

Late in the afternoon against the light, one can see the frame against the sky. It is the moment of glory, an event is approaching and the pavilion dresses up for the party. Darkness invades as a line of light runs through some tensioners that hold the tubes, they float in the dark and celebrate the start of a new event. In turn, the interior is clearly drawn thanks to the mesh that bathes in light. Simultaneously, one can see the park's skyline between the illuminated frame. The event ends, and the structure becomes imperceptible.

Collective Experience
The project is an experimental and constructive exercise, made based on a systematic process of production of pieces and their subsequent assembly, which account for an artificial and human sequence. The project had a team of four architects in charge, one Japanese engineer by mail -and a memorable visit-, three in charge of the audiovisual record, one illuminator, one professional with experience in traditional construction systems and 24 students with their doubts, skills, interest and wit. This interest, which we had from the beginning of this crusade was crucial for the project, it was genuine and strictly focused.

Thus, Parque Araucano became an outdoor research workshop, and the 30 characters became a group during the warm summer nights that were more than once a reason for celebration. 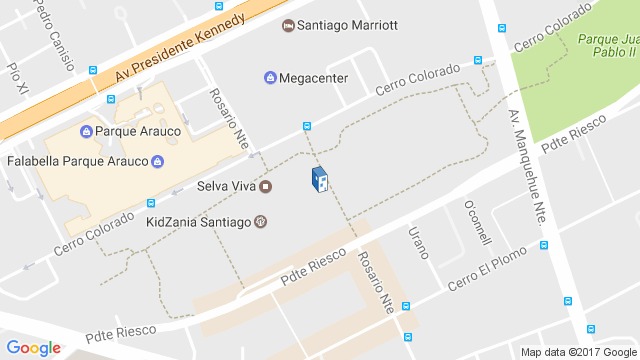