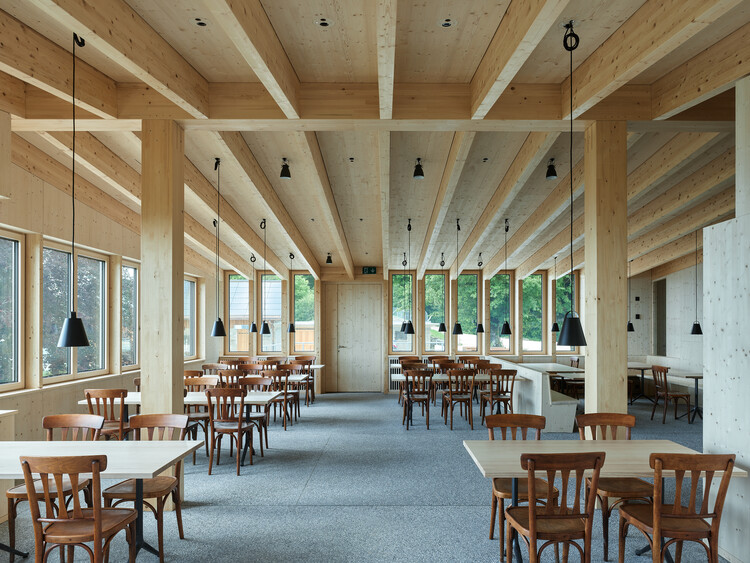 Text description provided by the architects. The ensemble on the Lägern Hochwacht with its more than 120 years of tradition will be comprehensively renovated and further built according to its previous history. The additions surrounding the historic tower, which have been gradually built over the course of a hundred years, will be replaced by a new wooden structure. Ecological materials, local craftsmanship, and local renewable energy form the foundation to continue to offer generations of visitors a regular place to stay.

The qualities of the conglomerate of individual, gradually added extensions of different volumetrics are taken up and remain the central design element in the interior. The new building, which appears low on the west side, encloses the existing tower and forms a new entrance situation that is clearly visible through the canopy. The originally present silhouette of the tower moves back into the foreground and thus strengthens the garden seating area through the clearly proportioned geometry between the house façade and the tree population. As in the past, the only plateau of the "legirdon", the ribbon mountain, again extends from north to south and connects the Wehn and Furt valleys.

The construction, the materialization as well as the building technology will be developed specifically from the conditions of the site and are intended to convey to the visitor an understanding of the special historical and geographical location. The inventoried structure will be extensively renovated and the quarry stone masonry will be exposed. Adjacent to this century-old solid structure, a delicate clear-directional supporting structure in wood develops on both sides, supporting a gently pitched gable roof covered with a thermal solar system.

The frames of equally dimensioned facade support and rafters running from east to west rest on a ridge purlin running laterally past the existing structure. North and south facades are correspondingly non-load-bearing. The ribbon windows and the shallow depth of the façade reinforce this differentiation from the strongly directed view through the rhythmic side façades. All load-bearing structures as well as the interior cladding and furniture are made of local spruce or fir wood. The façade cladding as fencing made of native spruce is saw-rough, brushed, and painted with a mud color.

Sheep's wool is used as insulation material in the façade and roof, and thermal energy is provided by means of an in-roof solar system and ice storage in the decommissioned army bunker. A large-scale PV system on the roofs of the two annexes supplies a large part of the annual electricity consumption. A sustainable showcase project was a central concern of the client from the very beginning. Likewise, the involvement of local craftsmen in order to allow as many people as possible to participate in the project and to enable the regional population to identify with the reinterpretation of an old tradition. 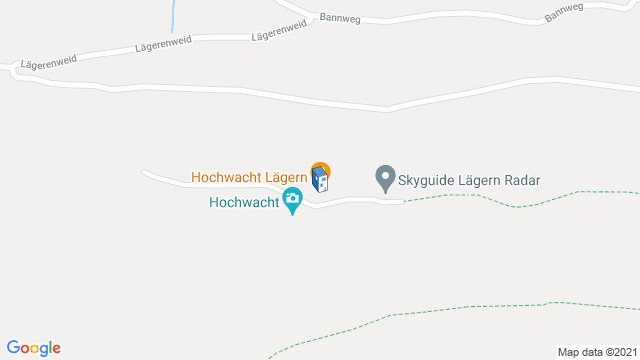 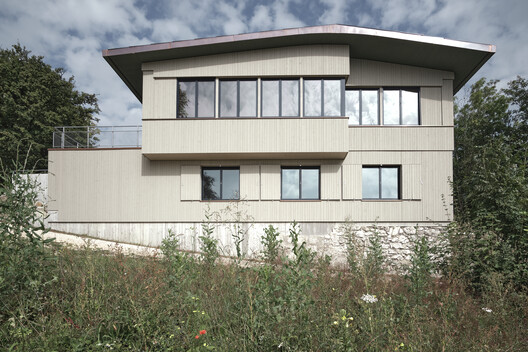 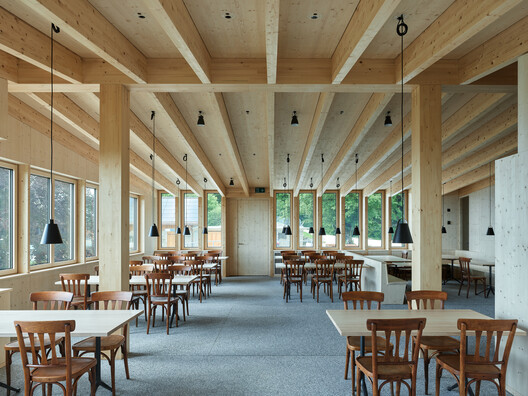