Save
Pavilion Between Lakes / Bansong Studio 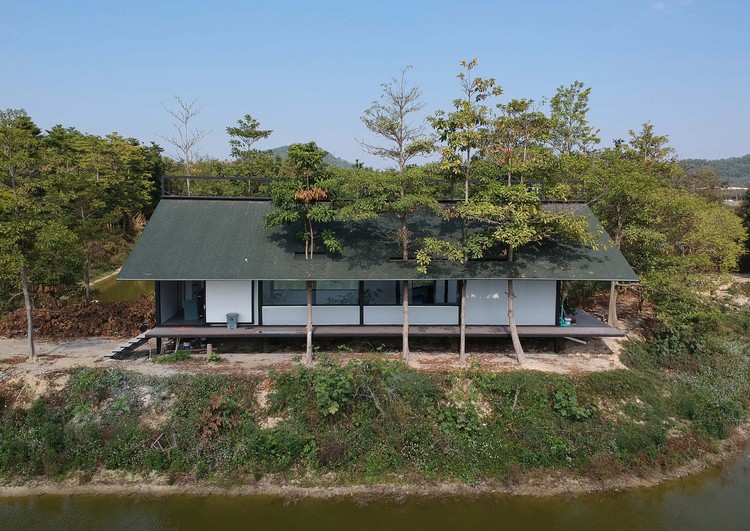 Text description provided by the architects. The project is located on an old farm in Heli Village, Nanlang Town, Zhongshan City which is sited on the end of a five and a half meters wide cul-de-sac. The long side of the building is oriented from south to north and is sandwiched between two lakes. We could see two rows of Elaeocarpus apiculate mast which erected towering and stateless about five or six meters high. Standing between the trees, the lake in the south is more open due to the mountains distantly. To the north, the lake is much quieter which is surrounded by trees.

The owner wanted to maximize the area of the building. Its breath between the east and west walls can be used up. The owner wishes to have an independent tea room and toilet as well as enough large space for later operation. Its function is undetermined. If there is a residual room, the place could be designed for the restroom and storage room.

The small building is named "Pavilion between Lakes". There are two reasons for the name: First, the meaning of "between the lakes" is the orientation characteristics of the building; and then, the homo-phonic Chinese word of the Chinese word "Jian" is "jian" which could be interpreted as "see the lake" refers to the framing intention of the building.

We choose the southern large single-pitched roof in the architectural design scheme. We shall the distance between two adjacent walls is as long as possible and make the branches of Elaeocarpus apiculatus mast in the south through the roof to create the additional colonnade-like effect to the eaves to ensure that there are enough extended eaves in the south. Meanwhile, the phenomenon of "the trees on the roof" weakens the volume of the whole roof to some extent and reduces the landscape pressure of the roof to the lake landscape.

On the north side of the building, the tearoom orients the more tranquil lake view. The square box is embedded between two trees which break through the boundary of the tree and provide the lake view to us. We hope to enhance the lake view by designing the bay window and the large glass that can not be opened at the corner in the tearoom which is different from the transverse framed scene in the north.

Unexpectedly, the finished building received the unanimous evaluation that it is similar to a "Japanese-style" building. Recently, I read the book that "Architecture in Context" by Mr. Hambard. There is a paragraph analyzes the "Japanese flavor" of the buildings of Tokai University which can be summarized into three aspects:(comparative analysis) First, all the steel frame in the tearoom exposed directly and painted the black matte varnish which is similar to the color of the dark log. The wall is filled with an 80 mm integrated insulation board and painted with white paint without other decorations. These two methods may be similar to the ways what Mr. Hambard calls "simplicity". Second, in order to save materials of the roof, the large inclined roof of about 30 degrees is designed on the basis of the six meters square steel tube. Third, the 50 mm square steel tube is adopted to the structural support of the roof integrated board which matches the characteristics of the square rafters.

Let's consider the way, so-called Japanese style, but also for a reason. 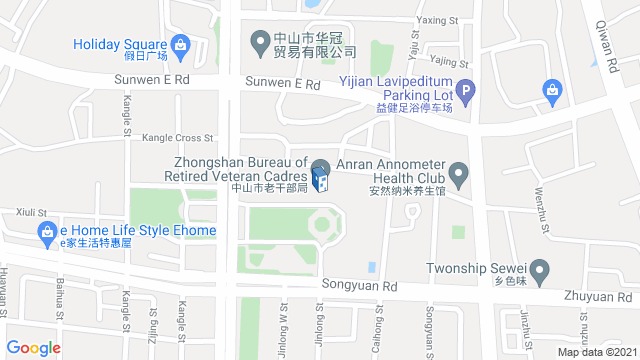 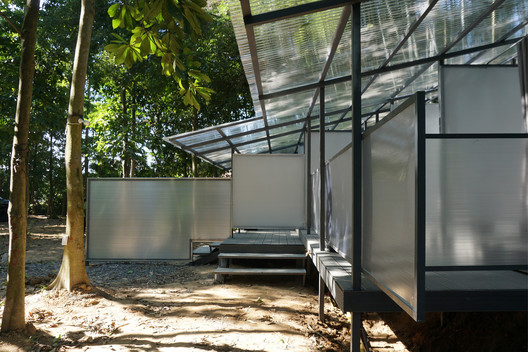 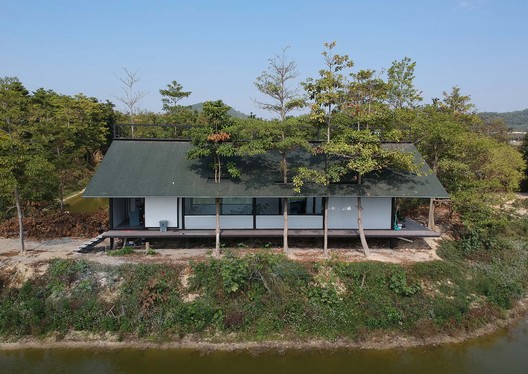