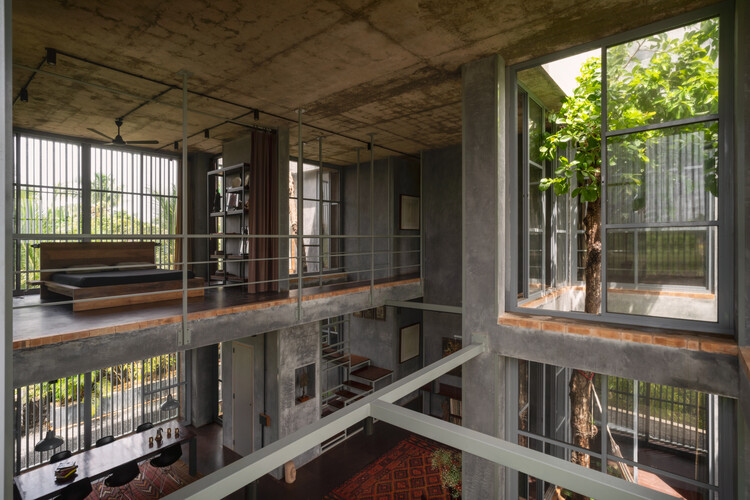 Text description provided by the architects. House 430/3 is located in the village of Moira in north Goa. Built between 2015 and 2019, the residence was designed by Nikhil Padgaonkar for himself, his wife and their young son. Situated at one end of a hill, with a panoramic view of the 380-year-old Church of Moira and fields beyond, the sloping site offered the possibility of developing several terraces on which to site various components of the program: the main house -a cuboid structure- sits at the highest level, while the lap pool, offices and garage have been assigned to the second level.

The cantilevered balconies of the residence, extending two meters beyond the top level, give the impression of a structure grounded in the hill while simultaneously perched precariously above the pool. A small independent studio -below the pool deck- has been placed at the lowest level.

The main house comprises of three bedrooms, two bathrooms, living-dining space, a kitchen and a small office for Padgaonkar’s spose, a Spanish photography critic. The creation of two internal open-air patios formed around pre-existing trees allows every room to be open to the outdoors on at least two sides. This enables them to receive ample natural light while facilitating cross-ventilation.

A core requirement of the design was to entirely avoid air conditioning, and the use of double-height volumes, openings in the ceiling to dissipate warm air, and screened facades comprising of a rhythmic alignment of large and narrow GI tubes that let cool air flow in while preserving privacy, serve as the primary mechanisms to meet this need.

Padgaonkar used only a handful of materials -and a limited colour palette of browns and greys- when designing the property: all ceilings are of exposed board-finished concrete, grey limestone paste was used to finish the walls, and kadappa and brown limestone was used for the flooring. The large finely-pointed basalt stones from Bijapur in Karnataka (South India) for all outdoor walls, with masons brought in from the region to dress them, provide a recurring visual element while adding a sense of weight to the project.

In order to limit the ingress of heat and glaring sunlight, the east and west facades of the house have been closed off with orange-brown kiln (refractory) bricks from Rajasthan (Northwest India), which typically line ovens and industrial chimneys. Their unconventional use in a residential program brings a dash of colour to the otherwise subdued tones of the finishing.

Exposed black-tube conducting, and the metal-framed doors, shelves, stairs and furniture were employed not merely for aesthetic effect, but as a pragmatic response to a moist climate and the ever-present threat of termites and white ants. The furniture and fittings were mostly designed by Padgaonkar himself, bearing in mind the need to house and display a large number of books and artwork he had inherited from his late father, a journalist of Goan origin who was delighted to see his son return to his family roots. 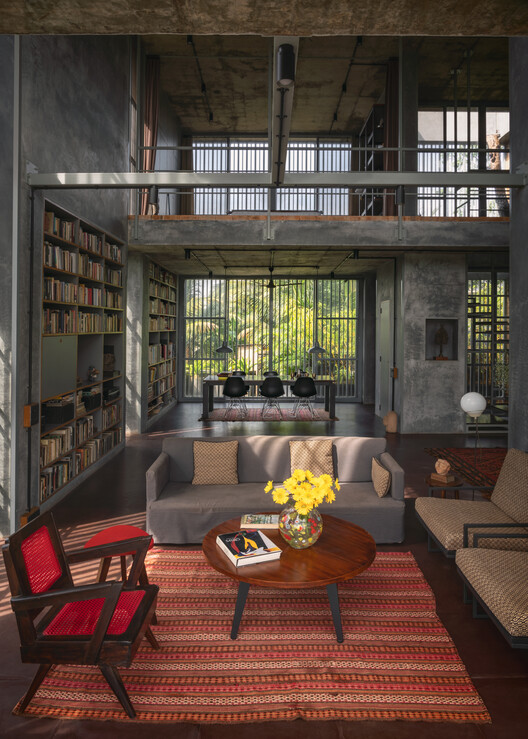 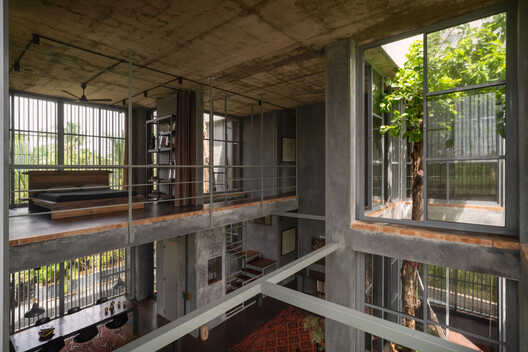