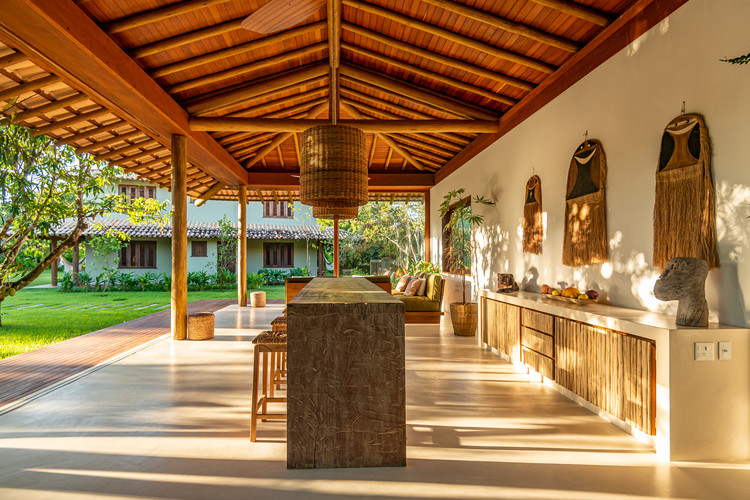 Text description provided by the architects. A new pool house with guest accommodation was sought as an extension of the family residence. The place was located inside a mature garden and surrounded by exotic indigenous plants that are part of the UNESCO conservation area of Trancoso in the municipality of Bahia - Brazil.

Originally, the area occupied a small fishing town that was isolated from the rest of Brazil until the 1970s. In 1986, electricity was taken to parts of the city and even today, the daily lifestyle remains "delightfully not modernized".

The project's approach sought inspiration in this native vegetation, in the surrounding local architecture, and in the need to work with the available resources. We were inspired by the local lifestyle that was not driven by "technology" and consumerism. We wanted to go back to the "basics", to disconnect to reconnect with nature. The architectural response allowed a holistic approach to reconnecting the user with nature. We wanted architecture to work with the landscape rather than adapt to it. The preserved mature garden provided a foothold for the new pool house to revolve around. The interior spaces were opened to become exterior rooms, merging with the garden. The garden has become the heart of the building. When viewed from the main house, the new pool house looked like a garden structure, perched gently on the ground.

The footprint revolved around the garden and the pool composed of two interconnected blocks, the 'living room' and the'' sleeping area '. Both blocks juxtaposed in their architectural form maintained a constant visual connection with the garden and the main house. The housing structure runs along the private road and as a continuation of the existing house consisting of a shallow sloping roof, responding to the local vernacular, which crosses the flat-roofed pavilion of the sleeping structure. Large sliding panels 3.5 m high and 4 m wide for the living area open the internal space to the pool terrace allowing the garden to extend internally. The sleeping wing was wrapped in local eucalyptus sticks that harmonize its existence inside the mature garden, filtering the natural light through the facade, giving a feeling of tranquility but maintaining the privacy of the outside.

The project was built during the current pandemic, which has proved challenging on many levels. This, however, reinforced collaborative working methods in conjunction with the contractor (Escala Nativa) from opposite ends of the world. The contractor embraced the spirit of the project and with his team brought to the fore a very high-quality Brazilian handicraft.

The interior design was designed and developed by Maresca Interiors. Their approach found a balance with architecture, incorporating a sense of place connected with local traditions. The furniture was designed and produced by local artisans using strictly local materials. Art, part of which comes from indigenous tribes in the Amazon and from local artists. 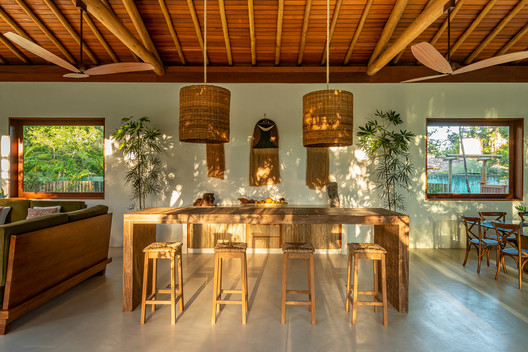 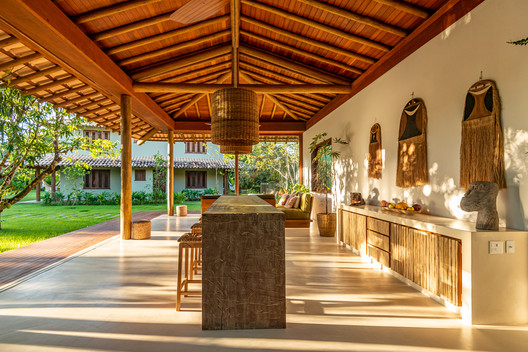