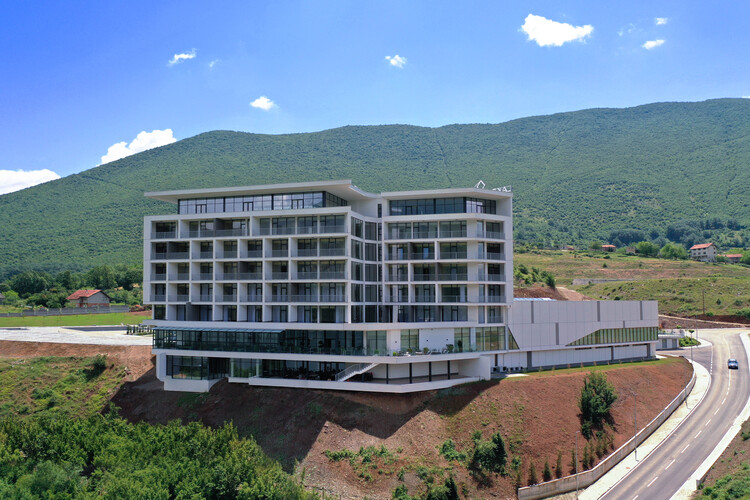 Text description provided by the architects. Site analysis and landscape, where the surrounding mountains stand out, the Drini i Bardhë river with the artificial Lake of Vërmicë and the dense greenery, were the key elements in the sketches, where overlapping and interweaving of the three brings us the architectural composition and shaping of the concept which was conceived and brought to life. The building itself is closely connected to the surroundings through the usual language of architecture, creating a common dialogue between the landscape and the building, a perfect symbiosis of both, including the surroundings within the building itself which flow through the central atrium void.

The project fully adheres to the program requirements and standards for this type of facility, where the first three levels are housed as: lobby, main restaurant, banquet hall, conference rooms, spa & wellness, garage, bars and other accompanying rooms, while the other five levels have 60 rooms of varying standards and ala carte restaurant at the top level. The orientation of the hotel gives a wonderful view of all the rooms but also the spaces and other accompanying facilities. The area around the hotel is rich with greenery and various recreation areas.

The view from the water is given priority, so all the accompanying spaces including the rooms are given the view and openness to the Lake. From the first stage of designing the “LAKESIDE Hotel”, we always intended to make it as very important “LANDMARK” destination in the south-western part of Kosovo and the city of Prizren, in the Vermica Lake area, an area that is impressive with its landscape and with such projects aims to attract as many visitors and vacationers. With this project we have aspired to create something new and innovative for the surrounding but also with the hope to transform it.

The top floor is made entirely from steel construction including roof construction, where 10cm sandwich panels are used as roof cover. The glazing is semi structural with aluminum profiles. The atrium has 12mx12 sky glass composed of structural glazing and aluminum profiles. The HVAC system is comprised of water pumps, solar panels, air coolers and water chillers, and sanitary water are provided by 3 water wells, 100000l water tank and public water system, while this as a whole contributes on the improvement of the environment and surroundings, but also in reducing the operational costs. 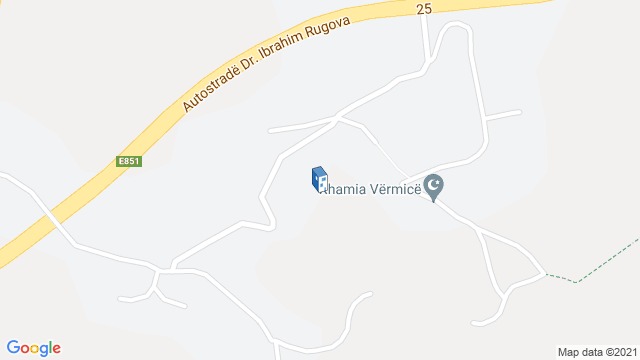