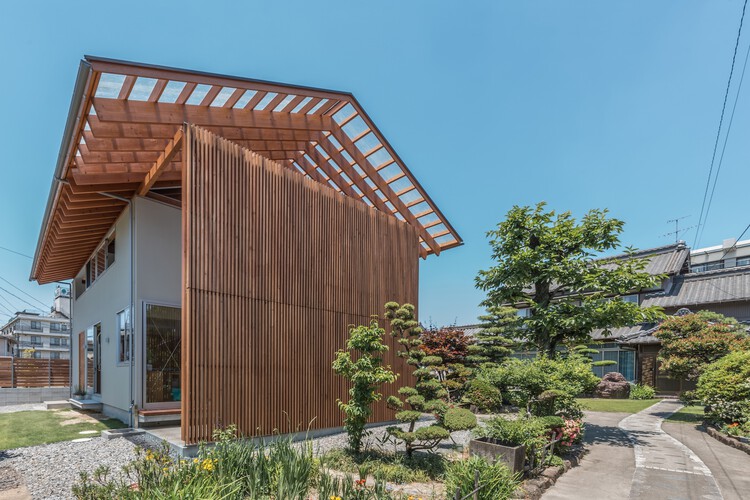 Text description provided by the architects. Even though there is Nagoya city near by, there is tranquil area of farm land of that has been in the family for generations. On the northern end of the large site sits the home of the owner's parents, and a separated structure was built on the south side. This is a plan to rebuild the south side structure as a home for the owner, his wife, and his young daughter.

The goal of this project is to make a natural relationship between the two homes maintaining the reasonable distance, not too close, and not too far. It is not to live with parents, or not also to make a sharing place with parents. My design is an attempt to maintain the garden view between the two homes and to connect the inside living area to its natural surrounding outside.

The new home built leaving the north and south garden as well as the southern home used to be. It is a composition that permeable wooden roof and wall gently cover the main volume. The gaps between the main volume and permeable wood make "Tori-michi" that can pass through the parents house to outside , and create triangular gable openings that connect the whole house inside.

The "Tori-michi" connection is a passage on the east side of the site where the parents can visit the southern house when they so choose. It is a two-layer open ceiling space, and the gable roof of the main volume overhang continuously there. The eaves are extended to the north and south garden and are connected to the west side. Because the roof is made of clear material, and the wall that supports it is made of wooden louver, it is a place that take in light and wind while being protected.

The inner triangular gable openings show the rafters of the slope ceiling and opening the top of the beam, so that each room is united from above. The rafters that overhang the eaves become more impressive by eliminating the ridge and the strut supporting it, and connect inside and outside by extending to the "Tori-michi".

In this area, many situations where multiple homes are built on a large land where family members live. It is an important theme to protect the cityscape from piecemeal redevelopment and to create relationships between old and new households. In this house, the trees in the northern garden take the distance to the parents house and the main entrance is on the south side, however the garden view is connection between the homes. This natural space provides a way for the families to stay connected but also to maintain their own privacy. "Tori-michi"on the east side is the tie that binds the families together. 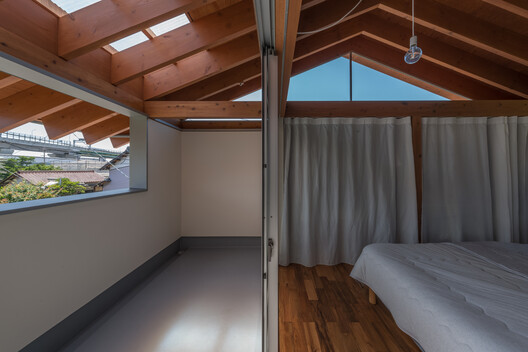 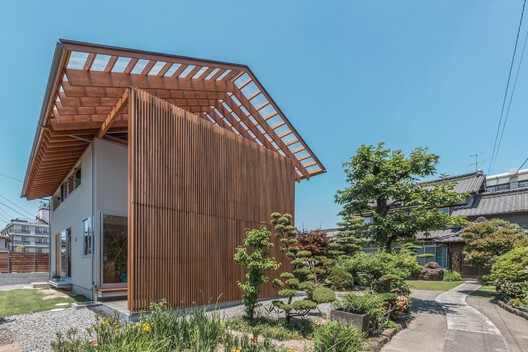