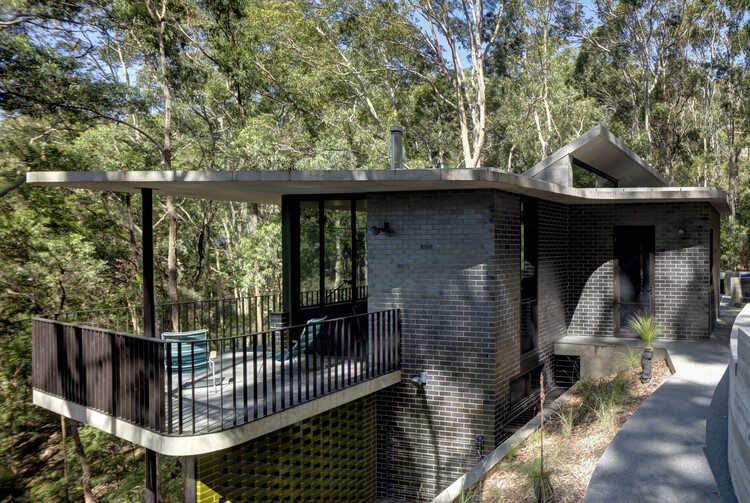 Text description provided by the architects. The site originally formed part of photographer David Moore’s property on the Bouddi Peninsula, where he built his seminal Lobster Beach house designed by Ian McKay in the early 1970’s. It was subdivided in the 1990’s but remained a bush block and has never been built on until the current house was completed in 2020. The brief was for a low-maintenance house within the trees. Designed and constructed over a seven-year period, the site presented significant challenges which made the approval and building process extremely complex.

Sitting within the ‘Pittwater and Wagstaffe Spotted Gum Endangered Ecological Community’, the site shares a boundary with Bouddi National Park and has a Scenic Conservation zoning – limiting the options for clearing and building. The site has an average gradient of 1 in 3, with large sandstone floaters sitting amongst sand and clay over weathered bedrock at varying depths. Within the moist gully running through the centre of the site, the vulnerable Red Crowned Toadlet was know to reside. The site is susceptible to bush fire events, with parts of the house sitting within the most extreme BAL-FZ (flame zone).

The house has a narrow linear footprint that runs along the contours to minimize cut and fill. Two large exposed sandstone outcrops either side of the entry landing anchor the building into the site and frame vertical circulation and a large central breezeway on the second level. The concrete slabs for the ground, first and roof levels are the principal expression of the house and emphasize the horizontality.

When building within ecologically sensitive bushfire prone sites there is a tension between minimal clearing to preserve the natural environment and the creation of APZs (Asset Protection Zones) of cleared or thinned vegetation to reduce fire hazards.

The decision was made early on to construct the building of robust non-combustible materials: off-form concrete slabs and walls, structural steel columns and glazed brick infill walls. This included a concrete roof that could withstand embers and falling branches. This allowed us to argue for minimal removal of trees, with some mature spotted gums retained close to and overhanging the house. A static tank is housed under the kitchen for spot fires.

The natural landscape has been retained and, where cleared during the building works, supplemented with plants selected from the identified species within the ‘Spotted Gum Ecological Community’ and is not irrigated.

Much of the area surrounding the house had been occupied by invasive weeds, including Asparagus Fern, Ochna, Camphor laurel, Lantana and others. Most of these weeds have been removed during the building process and ongoing weed management aims to have all weeds removed from the entire 6,500m2 site over the course of 2021.

The gully is intermittently wet and dry, and this wetting and drying is an important part of the toadlet’s lifecycle. Rather than directing stormwater into tanks or drains away from the gully, the natural overland flow to the gully has been retained through directing surface water and allowing the roof to freely drain without gutters.