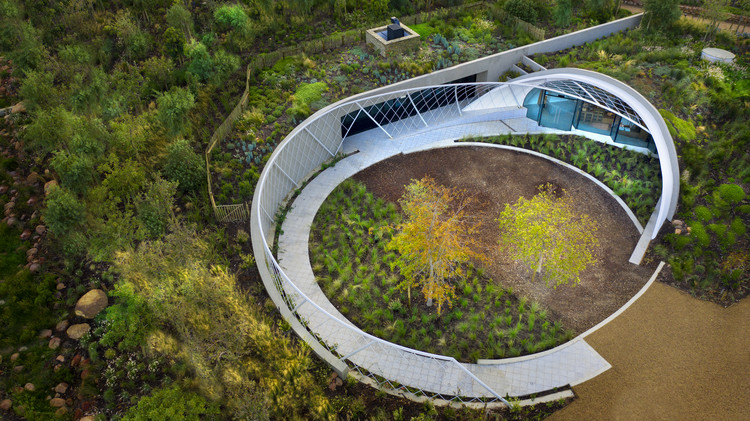 Text description provided by the architects. A creative collaboration between London-based architects Steyn Studio and Square One Landscape Architects’ South African office has resulted in the effortless fusion between architecture and landscape, with gardens that wrap over new buildings, which in turn are woven back into the landscape with intricate trellis structures. It’s a subtle celebration of the Breedekloof Valley in South Africa’s Western Cape region’s rich cultural history and draws its inspiration from the San who first inhabited the valley and who were later joined by early Dutch settlers.

The client’s brief called for the new development, which included gardens, a small restaurant/café called ‘Die Spens’ (The Pantry) and gift shop (‘Winkel’), on the Bosjes Estate to be relevant and contextual, providing an inviting and inspiring journey between the two key attractions on the estate: the well-known Bosjes chapel and the manor house, whilst not interfering with the visual dialogue between the two.

The new garden is a conceptual microcosm of the broader landscape, referencing the regional context of the agricultural Breedekloof Valley. The new didactic gardens, therefore, cultivate the land with enchanting playscapes that encourage children and adults to engage with the natural world, and the buildings nestled within it. Diverse ecologies were created by integrating wetlands and natural water treatment systems with forest habitats and rehabilitated indigenous vegetation.

The overall design respectfully acknowledges the presence of the historic manor house and chapel on the estate and visually enhances the previously established relationship between the two, as well as the surrounding vineyards and mountain backdrops, balancing its composition with new planting and the creation of a series of processional routes. The landscaping and buildings were carefully designed so as not to compete with the existing architectural features of the estate. It has a low visual profile with tree planting reinforcing the existing visual axis and landscape features such as tree windbreaks stitching it back into the surrounding rural landscape.

In order to hide approximately 750m2 of building, it was decided early on to have two separate buildings, which also adds to the visitor experience. Steyn Studio worked closely with Square One to not only position the built structures in the landscape as curiosities but also as anchors around which the landscape was then designed. The seamless integration of the landscaping elements with the built structures was an essential design objective from the start of the project. The landscaped gardens are spread across three sloping terraces, connected by a curving pathway that provides universal access. Both buildings are partially built into the slope, the roofs overlaid with soil and planted with indigenous grasses and succulents to blend seamlessly into the landscape, leaving the panoramic mountain views untouched.

The simple architectural forms of the buildings were inspired by the huts of the San called a ‘Matjieshuis’ (Mat House) as well as the first dwellings of the Dutch settlers, called ‘KapHuis’ (Truss House), which was apparently influenced by the San. The Kaphuis could therefore have been a hybrid of sorts between these two cultures. The Matjieshuis was a portable, curved, slat-framed structure covered with woven mats, used by San herders as they migrated seasonally with their cattle during pre-colonial and early colonial times. The KapHuis was a series of A-frame trusses covered with thatch, with the interior lowered to allow for more headroom. Both structures were part of this historic landscape and blended subtly with their surroundings. The mounds of the new structures have an uncanny resemblance to the nearby surrounding hills.

Intricately curved oak trellis structures, a subtle homage to the San huts, serve as a visual focus that guides visitors inwards and then twists to create the enclosures of the café/restaurant and gift shop which are then ‘carpeted’ over with the new gardens. Over time, these extensive trellises will be further integrated into the garden; overgrown with more than a dozen species of climbing plants. The expressed conical front-of-house spaces are partly sunken to reduce their scale impact, with the functional back-of-house spaces completely underground. In order to allow the trellis pattern to appear continuously weaved between the interior and exterior, the glazing imitates its pattern, resulting in a zig-zag arrangement that assists the tall vertical structural span of the glass.

The material pallet was kept simple. The underground building elements fronting the mountain backdrop were finished in raw cementitious finishes. The thin concrete shell vaulted structures are painted white, referencing the way traditional whitewashed Cape Dutch homesteads dot the landscape, as well as the nearby chapel, with the floor and walkways finished with grey terrazzo. After extensive research conducted by Arup, oak was considered to be the best timber for the trellis in terms of its durability and bendability. 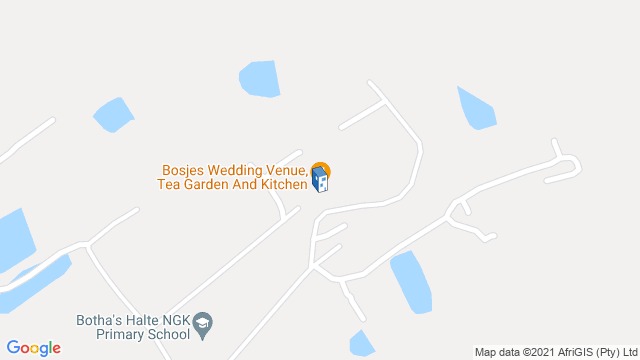 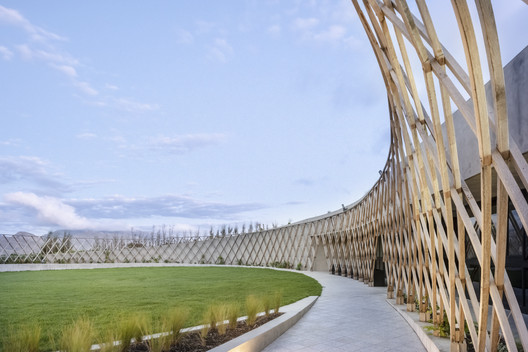 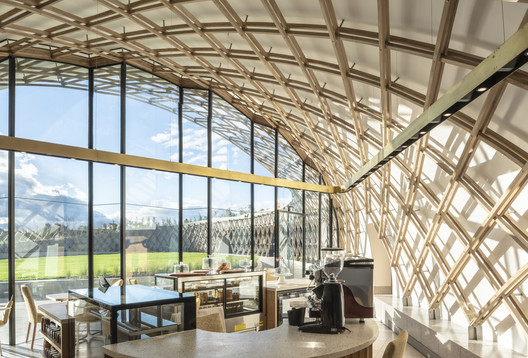 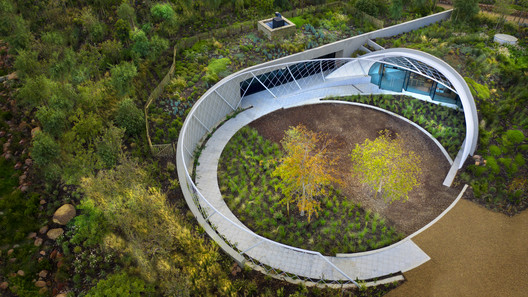