Save
Inside Outside / Ivanisin & Kabashi Arhitekti 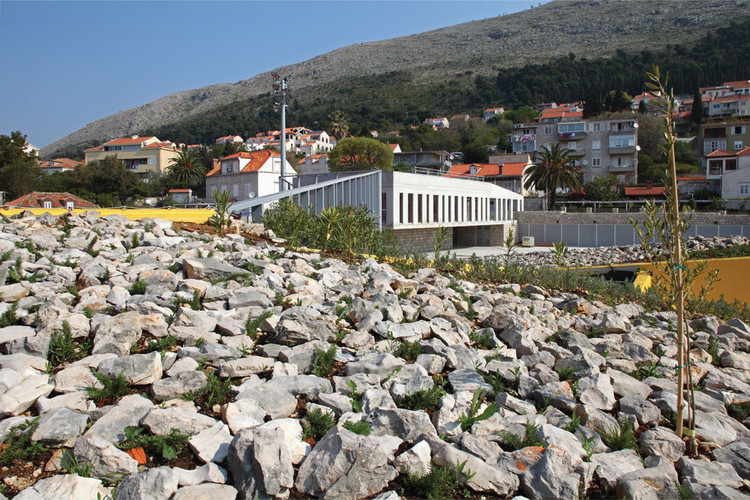 Text description provided by the architects. The underground car park for 750 cars on four levels is topped by sports enclosures, a café-bar and a terrace overlooking the old city of Dubrovnik and the sea beyond. It was completed upon the first public-private partnership contract in the Republic of Croatia. The primary school gave over the decayed sports courts to the municipality that loaned the land to the investment group. As compensation to the school, the investment group had to build sports courts on the car park's roof and a sports hall on a neighboring land lot. Located in the immediate vicinity of the historical city core, the car park has relieved the area of the vehicular traffic that is particularly heavy during the summer months.

Squeezed into an irregular site between the main (and only) road in this part of the city, three schools, family houses and a protected public park, the project had to be finished within an extremely tight budget. It also had to meet an array of planning regulations, the strict fire protection criteria for underground buildings with no precedence of similar size in the whole of Croatia plus the earthquake resistance requirements for concrete structures in an extremely high earthquake zone. To make the brief even more complicated, in the buffer zone around the zero category UNESCO heritage site of the Old City of Dubrovnik the heritage protection criteria had to be applied too. Thanks to the system of interior and exterior gently inclinated pedestrian ramps and elevators, unobstacled movement of people in wheel chairs is possible through the whole of the carpark, the sport premises on its roof, the entrance pavilion with cafe bar and through the sports hall.

The four underground floors are situated under the level of the surrounding park and streets. The entire surfaces of the parking floors are used for parking thanks to the organization scheme with very long ramps with smooth inclinations. To build the underground parking, the 30 000 cubic meters construction pit was dug in the limestone rock, reinforced with sprayed concrete walls and steel anchors up to eight meters long.

Convertible sports hall for the primary school is also partly buried in the rock bed. Thus the difference in levels of the surrounding road and the school yard was solved and system of platforms and staircases around it created. Half burried basement floor houses a small hall for ballet and martial arts, locker rooms and sanitary spaces. Upper floor houses double basketball hall with convertible spectator seats and a gallery. Both main halls face the north and thus it was possible to open them to the dramatic view of the mountain behind the city.

In this project, we were interested most of all in the shape of the relief; in the cultivated landscape on the fringe of the old city yet very close to the natural elements. Views over the old city to the open sea on one and to the bare rock mountain on the other side were strongly present throughout the design and construction processes. We also wanted to keep the memory of the gigantic construction pit- therefore the dry stone landscaping above the main car entrance and the massive stone enwalling to the surrounding streets. Particular constraints imposed by the Heritage department of the City enabled us to stage a revival of the forgotten craft of stone masonry on the external surface of the reinforced concrete structure. During a workshop with students at the Dubrovnik Festival of Architecture in the summer of 2007, which involved a tour of Dubrovnik’s rural surroundings, we had come across a stone mason who was practising his craft in the traditional way: to a depth of at least twenty centimetres, in layers no deeper than thirty centimetres, thicker at the bottom and thinner at the top of the wall. In short, his work resembled the medieval limestone ramparts of Dubrovnik. After long negotiations we finally managed to persuade the clients (a PPP) to accept this extremely slow construction method despite their initial reluctance to bankroll what they call ‘aesthetics’ of the building. By not only cladding but also enwalling the concrete structure, we hoped to turn an infrastructural object into a public space. 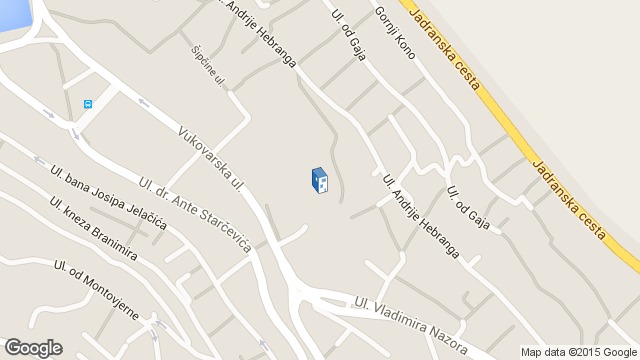 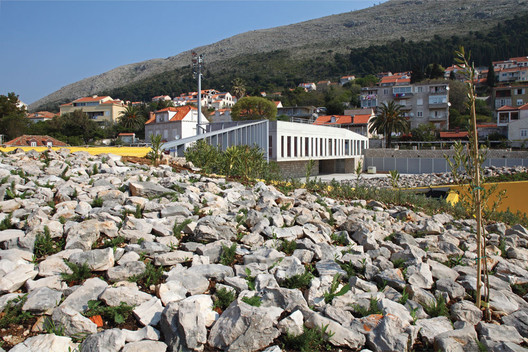