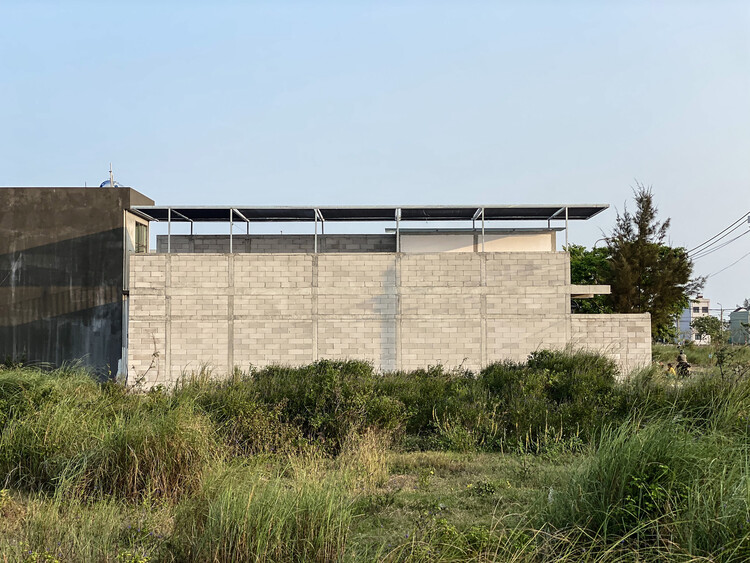 The title given to this house is a play on Le Corbusier’s Maison Citrohan of 1920, for which it shares some affinities: (1) a simple box form, (2) designed with prefabrication in mind, (3) use of local standardized construction - reinforced concrete frame with masonry infill - given the lack of local precast availability, (4) small size and efficient space use, and (5) aimed at the “affordable” market. The Maison Vespa is smaller than the Maison Citrohan and reflects the predominant use of the motorbike (vs. the car) in Vietnam.

Climate Response. Da Nang is hot and humid during the majority of the year and maintaining interior thermal comfort is a challenge without the use of air conditioning. Shading of openings and the house building envelope is accomplished with horizontal and vertical shading devices. Cooling breezes are able to flow horizontally around and over the central core, and vertically up the stairwell to the roof.

Typology. The plan configuration is a hybrid of archaic (“Megaron” volume), early modern (“Domino” frame), and late modern (“Farnsworth” core). This was the result of the search for simplicity and essentialism. The house was generated less from formal design intentions and more from a straightforward response to the functional and statutory conditions. Materials. Materials are mostly left without concealing finishes. Concrete is poured in place into coated plywood forms.

Electrical and plumbing runs are concealed below or within slabs and within masonry cavity walls. Insulated AAC cavity walls infill the concrete frame and help mitigate heat transfer given their currently exposed condition. Tropical hardwood is used for sliding and louvered doors, furniture, and clerestory adjustable louver screens. The selection of materials was guided by a desire for a direct expression of their nature, to register the construction process, and provide durability and performance with reasonable cost.

Poetry, and the Standard Element. The house design alludes to Le Corbusier’s notion of the “standard element” or object trouvé. The house is positioned as a tool (a means to an end, e.g., a Vespa motorbike), though not in a purely instrumental sense. Rather, it aspires to be a tool akin to a teacup used in a tea ceremony. That is, the house is proffered as a humble vessel to allow the unfolding of a ritual of the ordinary, that of a simple life. 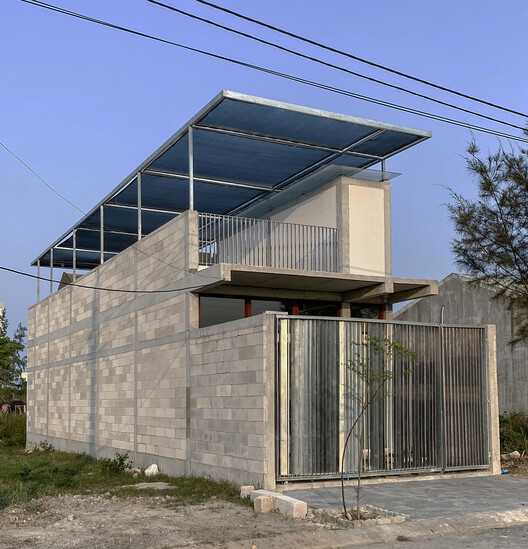