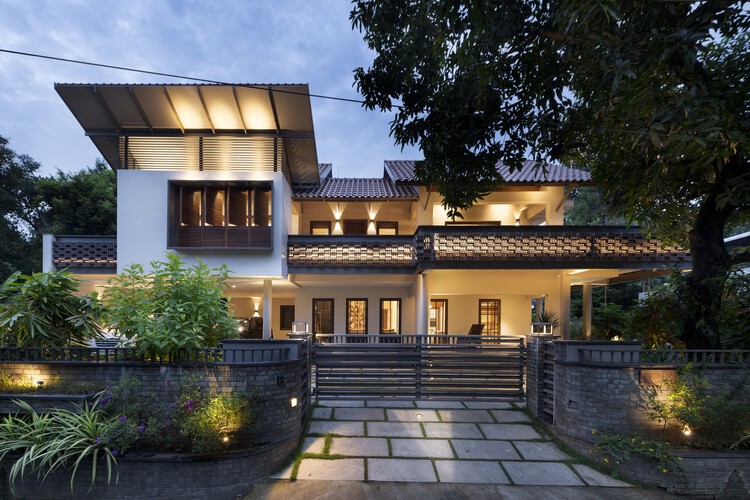 Text description provided by the architects. OUR APPROACH AS AN ARCHITECT. A main aspect that we took into account was to portray the feelings and emotional attachment the client had to his nostalgic regional landscape. We worked on modelling the house as a stylized version of traditional modernism which was carefully done by analyzing the micro climate, ecology, client’s special requirements and lifestyle.

Instead of focusing on a ‘time freeze design’ that replicated traditional details, elements like texture and feel of the design that brought the essence of traditionalism were highlighted. The client requirement of having a capacious family space for gatherings and cultural functions were met through careful functional space planning. A seamless flow of spaces were achieved by introducing multi-functional spaces lined with individual rooms and double height volumes connecting the spaces throughout at all levels.

DETAILS. Elements like wood, which has always been a conventional building material popular in tropical design was clubbed with a contemporary material like metal to create an equilibrium, which in turn maintained the balance with ancillary materials. The architectural lights were designed to be a part of the overall design element rather than to be a stand- alone. To complement the volume of common spaces, aesthetic hanging wired lights were designed that has minimal footprint and yet significant impact. It brings in balance and avoids monotony.

Handpicked Oak wood Mediterranean furniture was used in the interior to complete the look. Though different in origin, it complimented and blended with the traditional style as historically Kerala’s architectural style had been influenced by Portugal designs in furniture, wood work and baking clay tiles. Surrounded by the tropical landscape, the outside has a calming view filled with nature. Therefore, for better vistas, UPVC Windows were used, designed with bigger central double glazed windows without grills embracing the outdoor, imbibing the tropical plants to the contemporary interiors.

EXTERIOR. The details and interior space integration aided to the formation of our exterior. The south facing façade being the warmest during the day, projected balconies were introduced protecting from the harsh sun, which provides cute and serene spill over spaces to the children’s bedrooms. Beautiful Wooden louvered pivoted windows that was historically used as protective screens for privacy had been embedded in the design which adds a subtle feel to the front façade. The Balconies are adorned with Wiener Berger Porotherm Grinded Hollow Bricks.

Conventionally used for walls, the brick has a different take on this project. Integrated with metal I-sections it comes up as a Brick curtain – a second protective layer. The flying roof gets its name from the contrast roof slope radical to the normal gable roof adding to its elevational uniqueness. The roof tiles, with a touch of Portugal design, were imported to bring in its purest traditional look. As we leave the house the porous and yet sturdy compound wall, the flying roof, the brick curtain, its simple and sublime interiors combine to form a beguiling sense of feeling, bringing back the familiar feel of traditionalism. 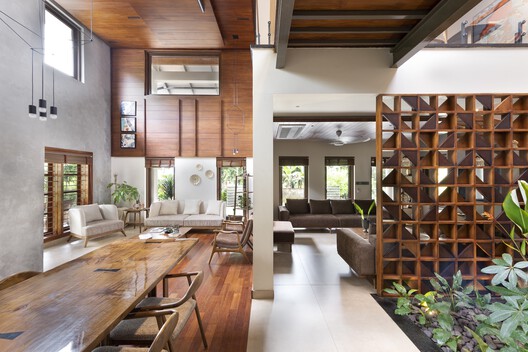