Save
The New Disruptor on the Block: How Proptech is Changing the Way We Interact with Real Estate
Share
Or
Copy

Would you be willing to buy a home from a robot using only an app? As technology becomes more and more integrated into the design and real estate sector, that once an outlandish idea has become a reality. Only a decade ago, almost no one talked about technology and start-ups in the built environment. The real estate industry, which has historically lacked technological innovations compared to other sectors, is now taking a stance to reinvent itself as an industry that is more efficient, flexible, and automated- all resulting in one of the newest buzzwords that has taken the world by storm, proptech or Property technology.

Real estate is one of the most lucrative asset classes in the world, accounting for over 13% of the global Gross Domestic Product (GDP), meaning that proptech’s potential has the ability to transform our everyday life. Although its definition is quite vague, proptech impacts a wide range of products and businesses that serve to continuously improve buildings as it pertains to the construction, development, and consumer aspects of the built environment at an individual and holistic scale. These products have the ability to continuously adapt in a constantly shifting digital landscape that responds to consumption patterns.

For the most part, buildings are still constructed with the same processes that have only slowly evolved over the last century. Drawing standards have rarely changed, the way data is managed and stored has continued to be rather archaic, and collaboration between architects, contractors, and stakeholders has been fragmented instead of streamlined. The early wave of proptech innovations introduced products that were stand-alone software, such as Autodesk and Argus, which still maintain a large share of the market today and are heavily involved with the actions that produce and maintain buildings. After the boom of the internet, new ideas about how real estate could be shared and promoted at a global scale brought forth online portals such as Zillow and Trulia, which make buying and selling homes much more accessible and comparable, and began to shift the real estate industry into more of an e-commerce market.

Today, two of the most well-known examples of the sharing economy, which has increased in popularity over the last five years are Airbnb, which recently announced that it would be opening a new technology hub in Atlanta to further develop its services, and WeWork, the well-known co-working space that laid the foundation and became a major disruptor and innovator in the office building sector. Before Airbnb, travelers relied almost exclusively on hotels while traveling, but more than 42% of people now say that they have used an Airbnb at least once, or are open to it- taking a major piece of this once expensive and inclusive hospitality industry and giving it back to homeowners who are willing to share their spaces with strangers. WeWork offers flexible space solutions with short-term leases and pre-designed fully-serviced spaces. Although the profitability of this business model has been questioned, it paved the way for other similar companies, like Knotel, to cause commercial office building owners some worry about how they might be able to compete.

In our modern era, technology keeps all aspects of the world on its toes, and now the building industry is keeping up. The next wave of proptech, and how it informs and influences how we think about and use space, create more efficient workflows, enhance collaboration, and increase transparency for everyone involved.

NewsArticlesBuilding TechnologyInternet of ThingsSmart BuildingsReal EstateTechnologyArchitectureProperty TechnologyProptech
Cite: Kaley Overstreet. "The New Disruptor on the Block: How Proptech is Changing the Way We Interact with Real Estate" 11 Apr 2021. ArchDaily. Accessed . <https://www.archdaily.com/959780/the-new-disruptor-on-the-block-how-proptech-is-changing-the-way-we-interact-with-real-estate> ISSN 0719-8884
Save 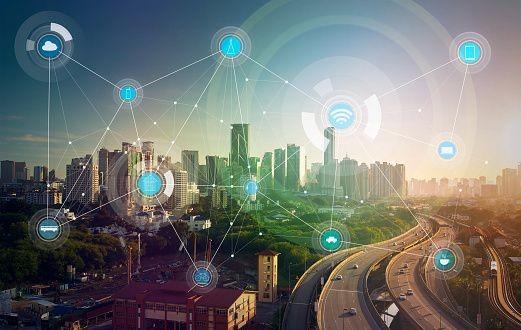