The Al Nouri complex, damaged severely in 2017, included several monumental spiritual landmarks, including the Al-Hadba Minaret and the Al Nouri Prayer Hall. For its reconstruction, the competition organizers called for an integrated rehabilitation program, rebuilding the Al Nouri Prayer Hall while also integrating new functions and secondary buildings that would recover the complex's central importance to the fabric of the city.

Endorsed by UIA (International Union of Architects), the competition was framed as an anonymous and open call for proposals, requiring that the leaders of the participating teams have at least five years of experience in the field and demonstrated experience in rehabilitation or new designs in historical contexts. A prize of $50,000 would be awarded to the winning entry, with additional prizes going to four runner-ups and special recognition going to honorary mentions. The entries were evaluated based on the following criteria:

The jury meeting took place from April 6 to April 12. They received 123 applications from around the world.

The Project is built around the primary goal of creating integrated open public spaces, connecting the main courtyard in front of the Prayer Hall with the expansion area.

The architectural masses are developed as organic edges giving a porous spatial definition to the multiple system of open spaces, with the overall goal of enhancing the function of the main open space of Mosul (the Al Nouri Complex) as urban hub for the old city.

The majority of the new functions included in the building program are located in the expansion area (western sector of the complex), with some ad-hoc solutions on the “connection points” between different pre-existent given architectural elements (for example the houses on the north-eastern sector) in order to give continuity, while ensuring a convincing hierarchy and articulation of the space.

The overall complex is given 5 public accesses, along the main streets around, with a special emphasis given to those evocating the north-south alley originally separating the historical perimeter of the Al Nouri complex from the expansion area.

The Prayer Hall is rebuilt how it was before its destruction in 2017, but with some specific improvements regarding the natural light and, also, the required needs to include some additional spaces, notably an enlarged area for women and the VIP area. These additional spaces are added on both sides of the main architectural mass and connected through a semi-covered open structure which functions as a summer prayer area, and gives continuity to the facades towards the main Mosque courtyard. 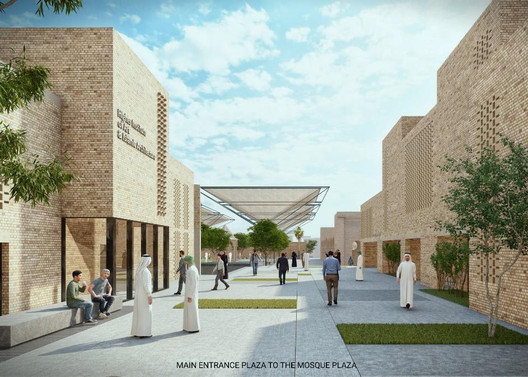