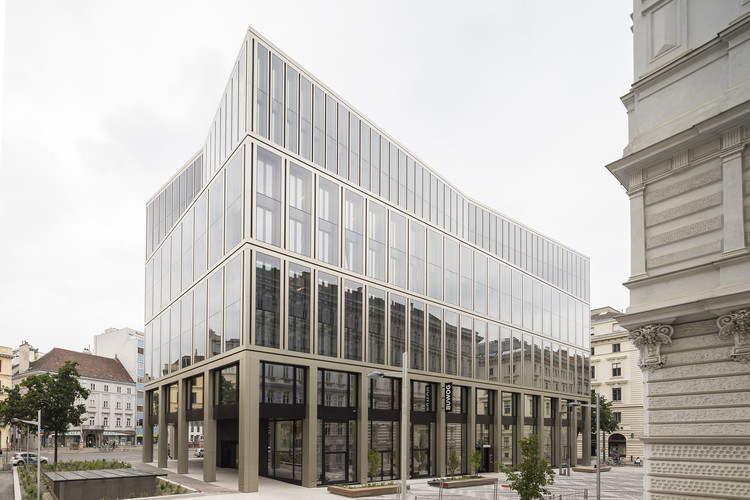 Concept. The design won an open international architecture competition in 2013. The concept envisages the integration of an urban office building into a historical environment while taking a distinctive and contemporary approach. Although manifesting as a freestanding monolithic building, a perceptual grid interacts with its context. The development out of the analytical parameter-trio: depth, material, and detailing is most prominently reflected in the outer façade cladding.

The Arcade, mezzanine, main and attic floors translate gradations of the Wilhelminian style houses – not last in its immediate surroundings. Large storey heights, attractive rooms and a sophisticated façade depart from the premise of creating a long-lasting building, which could also accommodate adaptations. On the inside, a generous central foyer expands towards the inner courtyard lying above by a glass roof. The office wings are structured by a flexible layout that can be used as an open plan or for cell offices and the surrounding and the climatically favourable double facade improves the individual comfort by openable windows.

Building Structure. The outlines of the volume are shaped by the building alignments of the surrounding town hall district. Also classic ‘wilhelminian’ spaces strategies have been integrated. At the ground floor an arcade opens up to a narrow pedestrian path while maintaining the alignment of buildings and the two corners of the building, which are facing the main street, are chamfered.

To support the experience of the mono-centrality of Vienna’s urban structure – which is considered as (a) characteristic of the World Heritage property ‘Historic Centre of Vienna’– the northern side of the building is shifted inwards from the historic building alignment line by four meters in order to maintain the sight at the St. Stephen’s Cathedral as the symbolic and visual centre of Vienna.

The façade. The structural grid of the facade adapts its ‘wilhelminian’ neighbors in scale and structure. Horizontal bands, delicate incisions, and double-layered glass take the place of historical cornices. Also, two floors are summarised as one unit. As such, the ground floor and mezzanine establishes the base level.

An essential design feature of the floors above is the sophisticated double facade system. It consists of a baffle plate facing the street and sash windows on the inside. Space in-between the panes is ventilated through incisions in the pillars and beams. This extended double-layered window system serves yet as another subtle contemporary translation of historic classical details, it is (a) reminiscent of the typical Viennese windows called “Kastenfenster”, box windows.

Re-use. Last but not least 90 percent of the former building has been kept in the recycle loop as reused raw material. 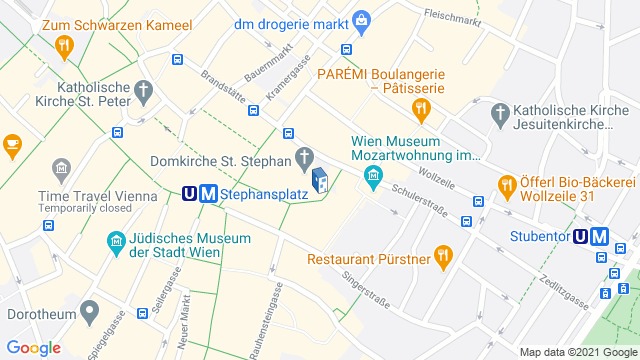 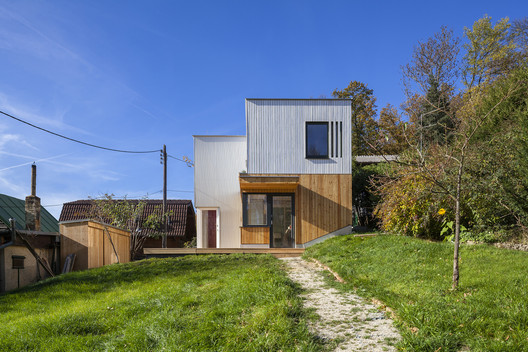 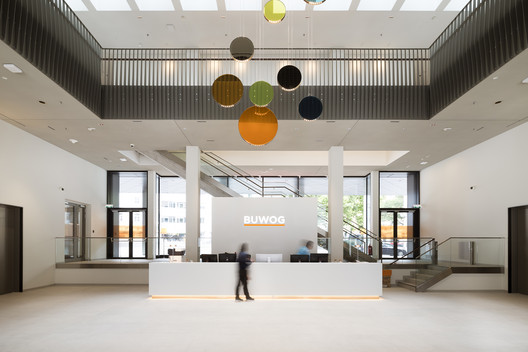 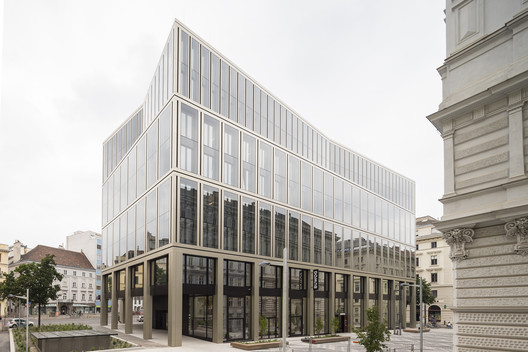