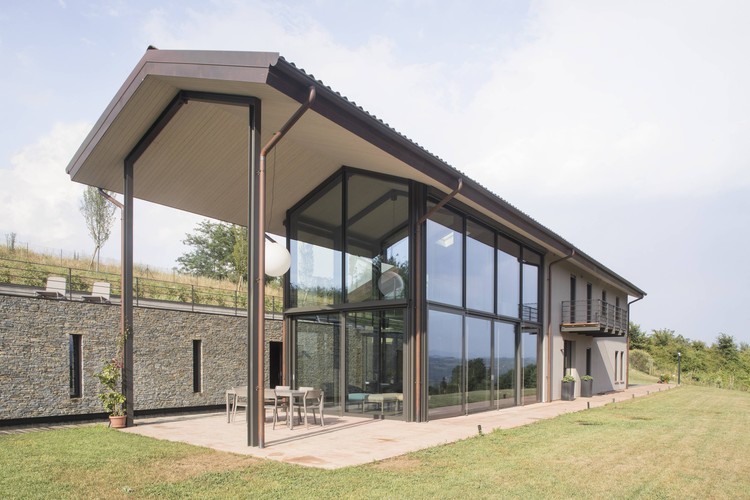 Text description provided by the architects. From the first visits to the farmhouse in Strada Della Carpeneta in Strevi, we were struck by the quiet beauty of the context and the great potential of the old building: the shielded and dominant position over the Bormida valley, the surrounding vineyards, and the proximity to the ancient road to Acqui Terme (AL). The building is a stone and solid bricks farmhouse probably dating back to the nineteenth century, then widen with volumes for agricultural purposes.

The development of the whole project was guided by the desire of a young family to move from the city with the idea of transforming this ruin into their residence surrounded by the landscape. Try to keep the original stone core and show it as a sculpture inside the house, carry out the necessary extension with materials and shapes of a distinctly contemporary character and make sure that the landscape became an integral part of the architecture. The new horizontal slabs and the load-bearing septa of the original part have been realized of exposed concrete.

The new expansion was imagined as a transparent volume with large sliding windows supported by an exposed steel structure: a double-height space that hosts the living area and the kitchen in which to perceive the sensation of carrying out daily activities immersed in the surrounded hilly landscape. This expansion realized with a glazed volume was mitigated by the use of the traditional pitched roof without interruption. A cover that runs from the ancient stone volume till the glazed extension and the new portico, by transforming them as a sort of extrusion of the original core.

The philosophy of the plants’ design also marries the principle of immersion and respect for nature. Through two geothermal probes and a photovoltaic system, a heat pump provides heating and cooling, limiting energy consumption. Through the reeds that delimit the property, an additional phytodepuration is carried out to the water disposal system.