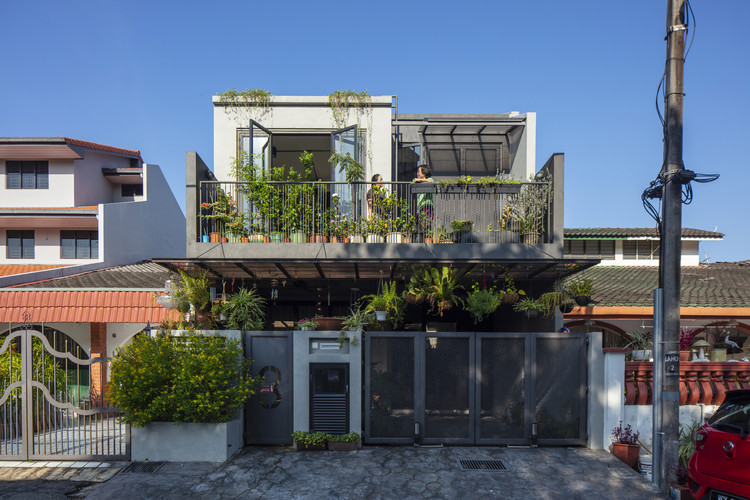 Text description provided by the architects. A major renovation of an existing single storey intermediate linked house to 2 1/2 storey, located at TTDI Kuala Lumpur. The aim is adopting minimalist design approach for the building appearance yet maximising the internal spatial arrangement and usage.

The house belongs to a young and humble couple with an intention to built a new home to live with their parents and son. Being an explorative and adventurous family, Jay & Ching Yee intended to have a spacious area for physical indoor activities besides creating some cozy areas for gathering and interaction purposes.

The building form derived from an extrusion of the existing single storey to a double-storey height by maintaining the existing neighbourhood skyline with the same roof pitch. The pitched roof was then split into two levels allowing daylight to penetrate into the double-volumed living hall and partial dining area. This is also to maximise the floor usage instead of creating conventional courtyard which may sacrifice the usable floor area.

The internal usage of the spaces is reversed from the conventional 2-storey linked house approach by relocating the semi private spaces such as living and dining areas to the upper level whereas keeping all the private bedrooms at the ground floor. The segregation between the private and semi-private spaces is clearly defined as such.

As one enters the house from the main entrance, they will be led automatically to upper level that houses the living and dining areas via an obvious, easily seen staircase. A slide was introduced next to this staircase, introducing a playful feature into the house for kids. The first floor is connected to second floor via wall protruded concrete slab steps, complimented with vertical sleek metal railing, creating an opened and profound visual connectivity between spaces.

The high sloped ceiling with semi exposed linear trusses of the main roof contributing to an interesting continuity of double-volumed to triple-volumed space within the Living Hall. The huge space was further enhanced with an insertion of mezzanine floor housing the indoor physical activities such as mini rock climbing.

The balcony was introduced to the main living space, with full height openable glass door panels which is the primary facade element, bringing daylight and natural cross ventilation into the internal spaces. It is also an open outdoor space overlooking the existing greenery of TTDI Park. 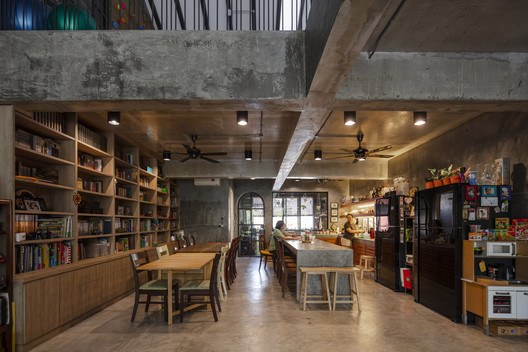