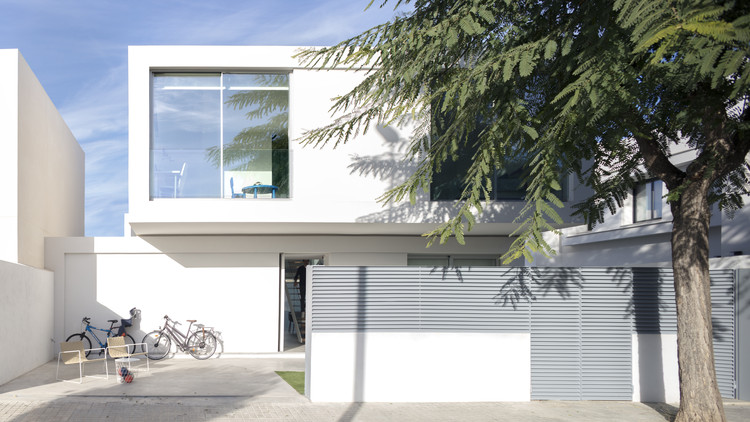 Text description provided by the architects. On the outskirts of the city of Valencia, in the town of Picaña, in one of those residential areas of single-family houses in a row that surrounds it, the plot is located in a regular, flat way, located between party walls, with a pleasant breeze from the Mediterranean Sea, which is the starting point for the Casa Hen project.

Clients come into contact with the Valero y Ochando architecture studio through word of mouth, thanks to other clients in the same area, with the knowledge and experience of the work already built.

The house arises from the client's need, a young married couple with two children, with more space for the family. One of the premises is to have outdoor areas for children's play and that these, in turn, could be controlled by parents at any time. At the same time, they defined the number of rooms they needed for each activity. With these premises and prior knowledge of the area, taking into account the best way to orient the house, we began to work.

The trust placed in us by the owners was fundamental. A very fluid relationship between architect and client was established and its result is seen in the Hen House. The boundary walls on both sides and separation from them, constitute the starting point. The proposal is drawn between the traces of two overlapping rectangular prisms that contain the program, maximizing the conditions imposed by urban regulations and scaping from the constraints of traditional suburban housing on the urban periphery. In this way, a building is achieved that, responding to a type of housing between party walls, ends up becoming volumes with their own character, exempt from the rest that stands out strongly from the environment.

Living at Hen House. The rectangular prisms are configured in such a way that most of the exterior space is freed on the ground floor given the limited dimensions of the plot and, at the same time, they form part of the interior of the house, perceiving great amplitude. The box that constitutes the upper floor is located orthogonal to the lower one, which allows great flights over the spaces freed up on the ground floor, achieving great expressiveness and solar control over these lower spaces.

The interior of the house is articulated around the staircase, in such a way that it modulates and organizes the circulations and their relationship with the rest of the spaces, both horizontally and vertically. The rooms are organized around the staircase, thus perceiving the whole of the lower floor through its open space and, the ground floor, configured as a single space that is compartmentalized and independent in different areas when necessary.

There is no gap. The light slides inside through the existing spaces between the mass, between the walls that configure the limits of the boxes. Complete sides of these prisms disappear, becoming complete glass enclosures sometimes or spaces between cabinets or furniture other times. Space is perceived as continuous, without limits, it is not confined in a box between four walls; it participates both inside and outside, appropriating and using the entire plot. The kitchen, separated by a wall that slides completely inside the wall to join the living room, continues into the outdoor space and pool.

The sheet of water that constitutes the pool is attached to the walls that limit the bottom of the plot, achieving a continuity effect on the wall that comes out from the bottom of the water. This position of the water sheet prevents us from reaching the limit of the plot, reinforcing the concept of spatial continuity. Hen House is soaked in the light of the Mediterranean and offers a comfortable and open space to live with the family.