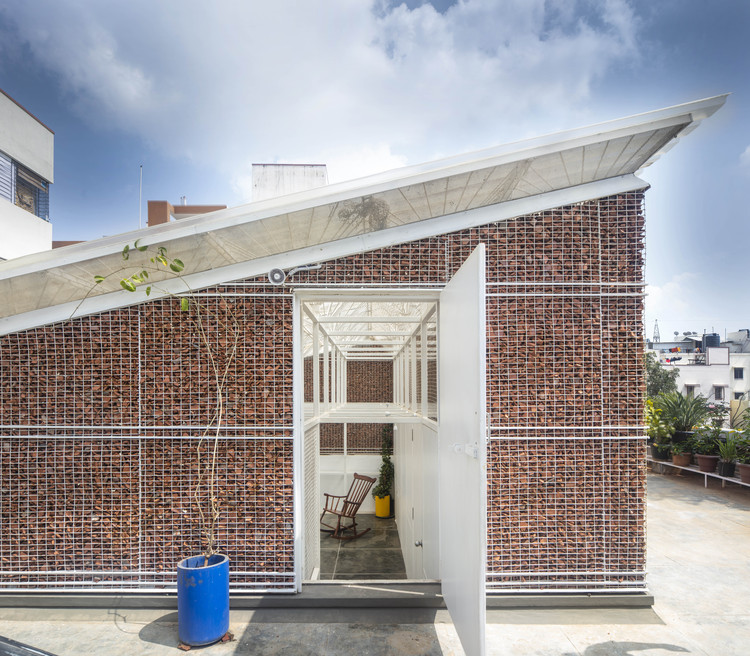 Text description provided by the architects. The Scaffold House is a low-cost renovation project based in Bangalore, in which the original load bearing building had three apartments has been converted into two duplex houses. The original building was built on a square 60'x60' corner site by the clients, as a retirement home. It contained their three bedrooms home on the first floor, along with two rental units (one two bedroom apartment and a single bedroom apartment) on the ground floor.

The format of the house came into question once their son moved to Bangalore. A reconsolidation of the house was needed. The idea of the Scaffold house stems from a pragmatic approach towards renovation, clarifying the understanding of the 'new' in context to the 'old'.

Structure, site and budget concerns needed a bold intervention which changed the project from a finicky renovation to one of a motivated architectural intervention in that of making a family house. A square of 20'x20' in the centre of the building was broken down carefully becomingthe central core for this intervention. This space became the volume catalyzing the restructuring process. Since periphery of the building had most of the existing functions, they were mainly retained with very limited intervention.

A light weight steel 'scaffold' of 2"x2" mild steel box sections was erected in this central core space as it became the language of the new as it negotiated with the old. This framework also acted as a structural tie for the existing structure as it held it in place. The walls of the existing house were slowly and carefully reconfigured to enable this transformation as well. The staircases, passages, gardens, and circulation spaces came into this central space, including an AV room and a terrace sit-out. A light translucent sheet above the central core gets bright sunlight into both the houses, as it also enables cross ventilation for the peripheral spaces.

The shadows of the steel scaffold, as they move through day animate the houses with the changing light and seasons giving a living pulse to the houses. The steel scaffold showed up externally as well, to extend the living spaces into beautifully activated gardens in the west and the south road facing facades.

The compound walls were raised and grilled above, to include these gardens into the privacy and security of each house. The southern part which occupied more space on the ground became the parents' house while the northern part which grew as it went higher became the son's house. The Scaffold House is an ambitious and pragmatic project ensuring that it maximizes its impact without getting sucked into a dark spiral which plagues most renovation projects. 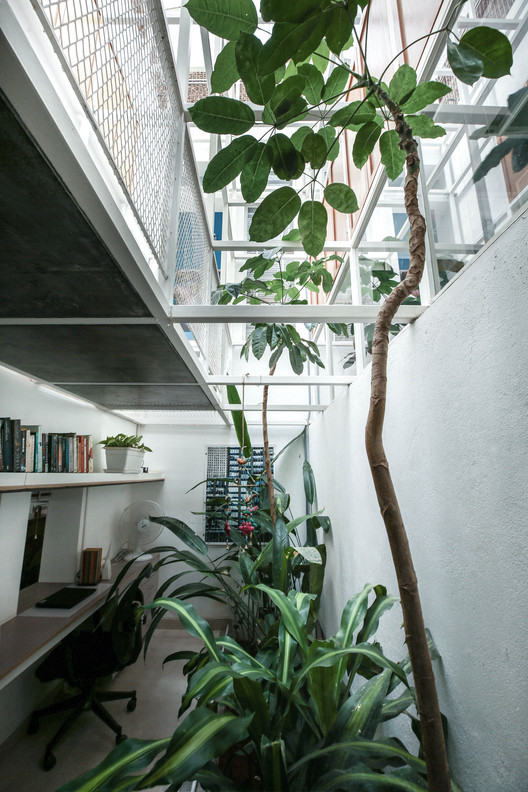 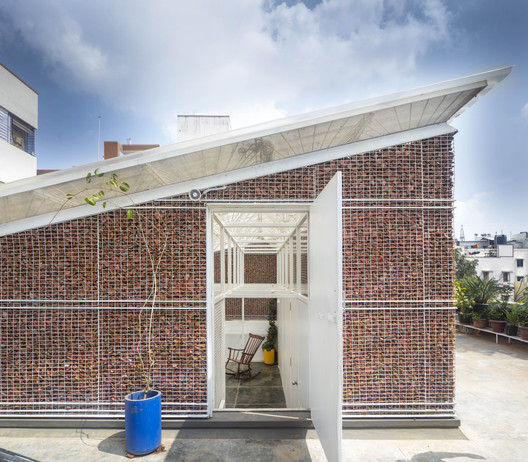