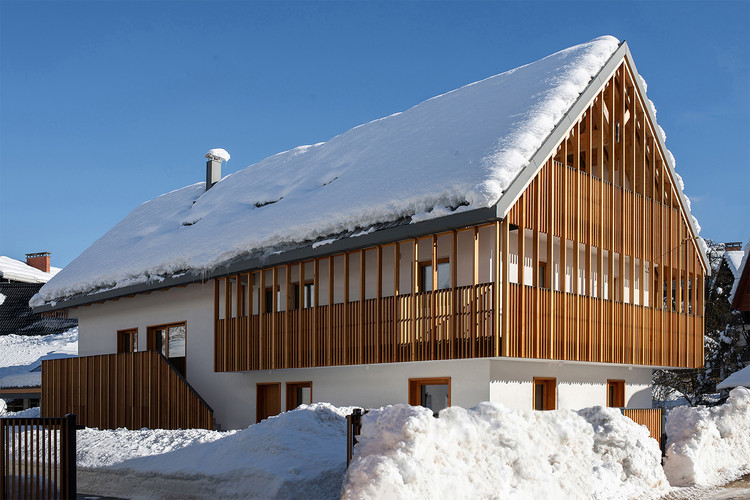 It all started with a gank, a long balcony common to older alpine houses, for carnations and a small garden in front of the house.
This seemed like an excellent starting point for a home in an old and traditional town of Bohinjska Bistrica.

Today the house stands amid others in the centre of Bistrica, enveloped by a wooden façade and a gank, both traditional features that were once prevalent among houses in the Gorenjska region.

At the moment the house still boasts a colour of fresh wood, but in time it will fade to shades of grey and completely blend in with the existing surroundings, thus becoming an integrated part of the existing town's landscape. With this colour change, the façade will visually step aside and let the gank, overgrown by red carnations, and a small green garden in front of the house to come forward and take charge in shaping the view of the house.

Our design process aimed to create a house with contemporary attributes but it still had to, in its form, gracefully intertwine some of the traditional elements.  We've achieved that by reinterpreting the traditional gank, which on the eastern facade follows a more conventional form, but in contrast, takes on a modern approach on the southern facade. In this part of the building the gank, which is traditionally executed on the higher floors, descends to the ground, with added on wooden cladding, hiding the entrance to the apartment below.

This shift in height and partial coverage, emphasizes the main entrance to the above unit and exposes the building's functional hierarchy. In addition to that, the wooden cladding screens off big windows placed in the wellness area, shielding the intimate space from the outside. The same visual approach is used on the rest of the facades - larger windows used to bring in heaps of light are moved back behind the wooden cladding, leaving only smaller windows visible from the exterior. These being a reference to the traditional features and local typology.

The house is divided into two units - the first unit used by the owner as his private accommodation and the second used for renting. With this functional divide in mind, we wanted to create two independent functional units gathered within the same architectural envelope.

The division of the inside space is portrayed on the facades in form of their partitions and can as well be seen in a form of its immediate surroundings. The renting unit comes with a garden on a different ground level as the rest of the landscape, which grants the users more privacy and at the same time ensures more harmonious incorporation of a rather large object into the old city centre.

In the interior of the house, the main feature is the visible wooden roof structure, which becomes a dominant visual element and therefore shapes the atmosphere of the upper floor. On the ground floor, space is, as seen in most traditional houses, concentrated around a stove. 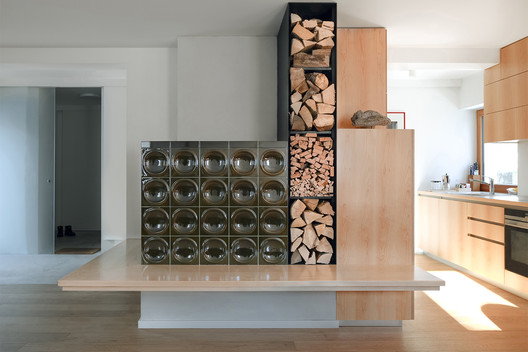