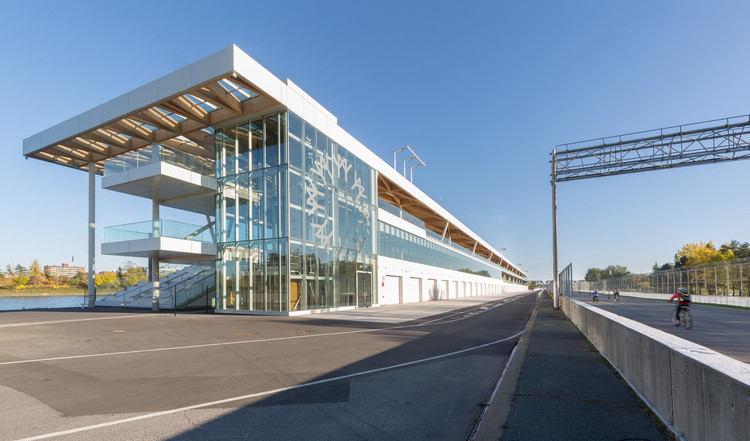 Text description provided by the architects. As part of a renewal agreement for the Formula 1 Canadian Grand Prix, the city of Montreal had to replace the existing temporary structures with a larger permanent building that would more adequately meet the needs of the event. The new paddock includes garages for the teams, offices for the International Automobile Federation (FIA) and the promoter, a lounge area for 5,000 people, and a Multimedia Center for journalists and broadcasters. All furniture and equipment are shipped from abroad and installed for the duration of the event.

To facilitate the completion of the$ 50 million project in the 10 free months between the two Grand Prix editions, the building was designed as an assembly of prefabricated parts including concrete panels, steel beams and columns, CLT wooden beams and panels, curtain walls, and removable partitions. It can also be easily disassembled and recycled materials in case of Grand Prix termination.

Unlike other international Grands Prix, the lounge areas have no exterior walls and are not air-conditioned, the interior spaces are minimally finished and the building must make responsible use of the public funds invested while equipping Montreal with equipment that reflects our identity and values for an event seen by more than 300 million people around the world.

Concept. The building echoes the innovative structures that marked Quebec's imagination when the 1967 World's Fair was held on the site of Île Notre-Dame.   The Terre des Hommes logo using the Y to represent men with outstretched hands remains an indelible symbol of this summer that marked the advent of modernity here. The wooden structure proposed for the roof is based geometrically on this memory and reflects our desire to move away from the images and values usually associated with motor racing and more specifically with Formula 1. The advent of new owners and executives at the head of the circuit has made possible the acceptance of this proposal, which corresponds to their desire to move away from the ostentatious globalized luxury in order to highlight the cultural and geographical specificity of each stage of the circuit and adapt it to emerging values.

Program. The new Paddocks will accommodate up to 13 stables, each of which will have two front access for single-seaters, drivers, and technical teams, as well as service access located at the rear of the building for equipment or for quick access to the redeveloped hospitality area. Designed without a permanent division, the garage space is modular according to the needs of the teams at each edition of the Canadian Grand Prix: temporary partitions will be used to create the desired divisions and thus suit the technical needs of this constantly evolving sport.

The building presents a completely new configuration of the space for sports commentators and representatives of the FIA and FOWC: the distribution has been redesigned to meet the need for stakeholder interactions with the action taking place on the circuit. Unlike the Old control tower which was made at height to offer good visibility on the track, the new tower is arranged horizontally on 2 floors right in the building, as new race control technologies now require less direct visibility. A media space is integrated into the building rather than being located in a temporary marquee, in order to provide quality services to journalistic representatives, namely modular lighting, a suitable ventilation system, and electrical and telecommunications connection boxes including optical fiber.

This media space is also a rental space made available to Montrealers for events outside the Grand Prix period in all seasons. The building has been designed to multiply the views on the race track, but also on the entire environment of the park that surrounds it, with the development of several terraces on the 2nd and 3rd floors. The new building being higher presents a 360-degree panorama to the spectators. On one side, a close-up view of Jean-Doré Beach, the Casino de Montréal, former Pavilion of France during Expo 67, as well as the former Pavilion of Quebec that is adjacent to it. In the distance, the city of Montreal, Mount Royal, and its cross are visible. On the other side, you can see at first glance the Olympic pool where groups of rowing, canoeing, and dragon boats train. Behind, a narrow passage of the St. Lawrence River crossed by freight boats, then the South Shore of Montreal.

Universal accessibility. Accessibility has been completely redesigned in the new building: the entire ground floor is on the same level as the ground and the floors are accessible via a panoramic glass elevator located at the east entrance. Bleachers and bathrooms are also provided to ensure universal accessibility and ease of travel.

Sustainable development. The structure of the roof of 1425 m3 is made of wood, a durable and renewable material. Since, during its growth, wood captures CO2 from the atmosphere and sequesters it in its fiber, this volume of wood corresponds to the sequestration of more than 1,000 tons of CO2. Wood is thus considered carbon negative, which means that not only does the use of wood in construction generate low carbon emissions, but also helps to remove additional carbon dioxide from the atmosphere.

The waterproofing of the roof is carried out with an elastomeric coating covered with white mineral granules in order to limit the heat island effect and the temperature rise for the spectators. The solar photovoltaic panels on the terrace total 64 m2 and should store enough solar energy in one year to compensate for the energy expenditure required for the complete building at a Grand Prix. The installed system will provide an average of 87,600 kW/hre per year and the estimated energy consumption during the Formula 1 event is 88,940 kW / hre.

Local Production. The wood used for the beams, in the form of glued and cross-laminated (CLT), as well as for the decking, in the form of cross-laminated, comes from northern Quebec and values species and small pieces of wood to optimize the fiber of all the trees during the cutting. The precast concrete parts come from a Quebec company, as are the curtain walls and the steel structure. The division into several separate batches of the structure (concrete, steel, and wood) allowed simultaneous production in the factory of colossal quantities of material as well as their erection in a very limited period of time and despite a harsh winter. 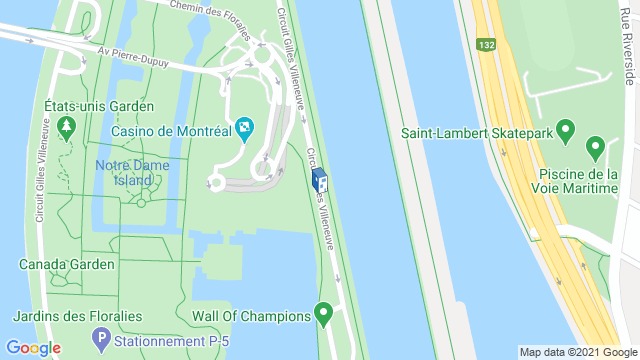 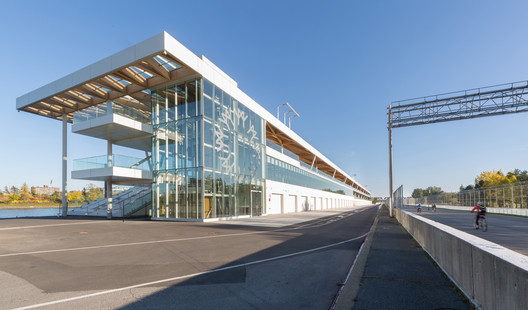