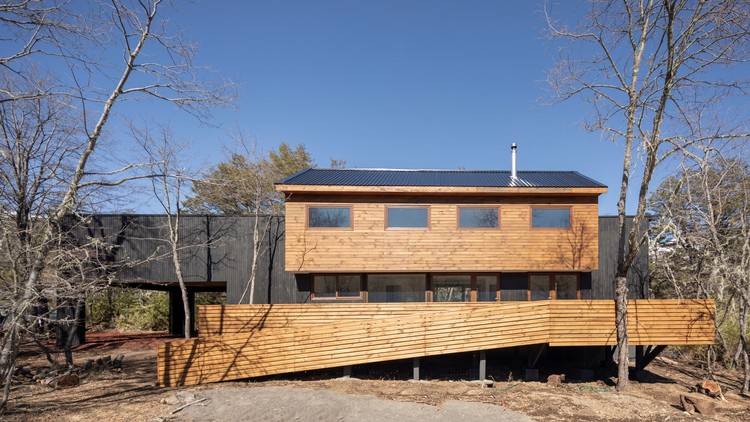 Text description provided by the architects. The Rio Lava cabin is the register between the encounter of lava and forest, of wood and stone, it is a kind of amalgamation of volumes, voids, and platforms that juxtapose each other.

The protruding volumes with their pronounced angles give the project a robust and raw character, but with the color combination, it becomes light.

Many formal situations happen; An elongated parallelepiped is observed, truncated at the top, and undermined at one end. A regular volume is juxtaposed asymmetrically on top of it, floating in the front part and settling in the back part, a small sectioned and suspended volume is attached to it, which in turn struggles with the presence of other strong elements. In the front part, there is a wide and thick terrace that virtually ties both volumes.

The project is developed on three levels, accessed through the second functional level, leaving the first for the installation of service elements. The project is accessed slowly by a ramp parallel to the open terrace, which connects with the common spaces (living room, dining room, and kitchen). The private area on the second floor is accessed through the vertical connection path, separated from the first floor.

Rio Lava is located at the foot of the Nevados de Chillan Volcano, in the Cordilleran Zone called Las Trancas, a town that belongs to the commune of Pinto. The area surrounded by nearby mountain peaks offers a varied landscape panorama during the year, the mixture between deciduous and evergreen forest, the presence of snow makes the cabin behave in a static way, in the place, it is a kind of stoic refuge that observes as the exterior changes.

The structure of the perimeter base is made of reinforced concrete, on which the main volumes are drawn in steel, filled, and covered in wood. The volumetric variability outside is smoothed and regularized inside. 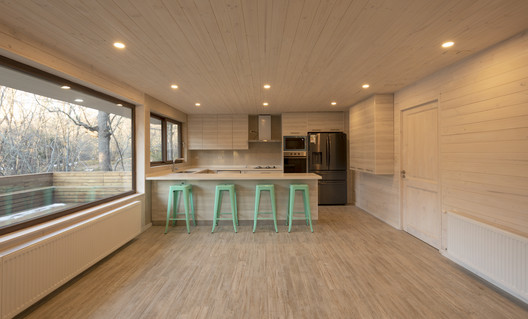