Save
A Window on the Langhe House / Studioata 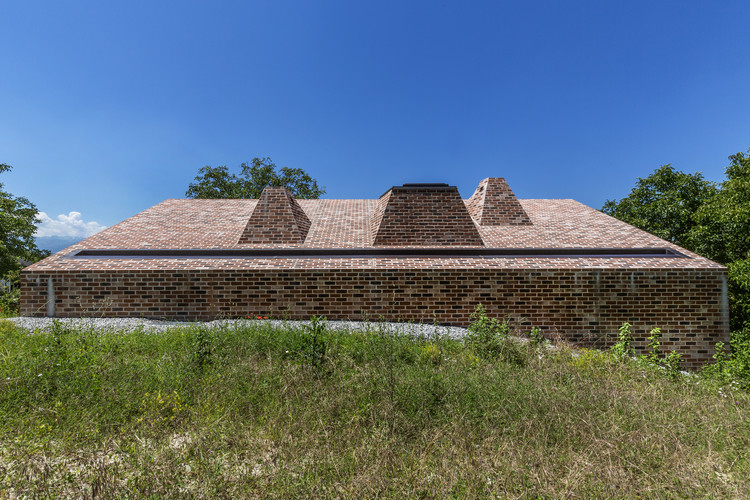 Text description provided by the architects. The small town of Ciglié is a village of few houses perched on the hills of the Langhe, between Ceva and Cantù, chosen by a married couple of Rotterdam, to get a place in Italy where they could go to live some months of the year. The medieval castle of Ciglié, vineyards, nut and hazel trees and the great views over Mondovì and the whole of the Alpine arc are some of the elements that inspired this small architecture.

The house of 110 m2 built on a 2000 m2 steeply inclined slope consists of a living area, including two bedrooms, two bathrooms, one storage room, and a long portico. A holiday home specifically conceived for the proprietors and their guests, where the spaces have been voluntarily reduced to a minimum.

Coming close to the plot of land from the road upstream, the building appears in front of our eyes embedded in the slope of the hill, while the character of the place remains unchanged. Only the cover is visible as if it were a fifth facade of the building. The volume, closed on three sides, unexpectedly opens out to Mondovì and the Alps. One single large-size window over the Langhe, with 9m x 3m glass panels and a large portico, through the hearth of the house, become a magnificent stage for every day. The small architectural structure is fully covered with bricks, 21500, expertly installed by a qualified local bricklayer.

Continuous brickwork covers each facade and the sloping pitches of the roof. On the side prospect, the window of the guest room is covered with shading bricks laid in “Swiss Cross” allowing a glimpse to the Castle of Ciglié from the inside of the house. On the main prospect, also the access door to the storage room is covered with bricks.

The chimneys and the big skylight on the roof, with their inclined surfaces of exposed bricks, appear as architectural follies that do not affect the monolithic configuration of the building but redesign its profile becoming a part of the skyline. A wide terrace built with 35 large solid wood trunks complete the relationship between the closed space of the building, the portico, and the garden. The wooden elements resting in a natural way on the slope of the hill, create a sort of large staircase leading to the garden.

A painted iron portal 4 meters high located at the edge of the road defines the entrance to the property and, as a work of land art, frames the Langhe and the house, which has now become part of the landscape The great fortune of this project is due to the encounter with the enterprise and local artisans, thanks to whom it has been possible to realize what until then had only been imagined and drawn on paper. 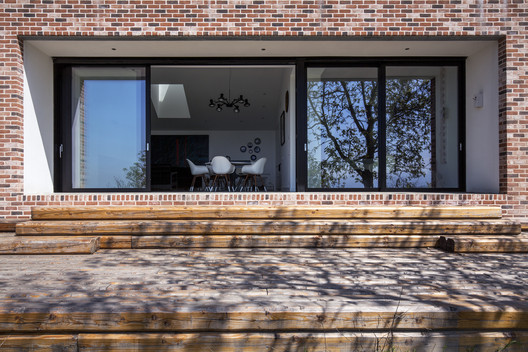