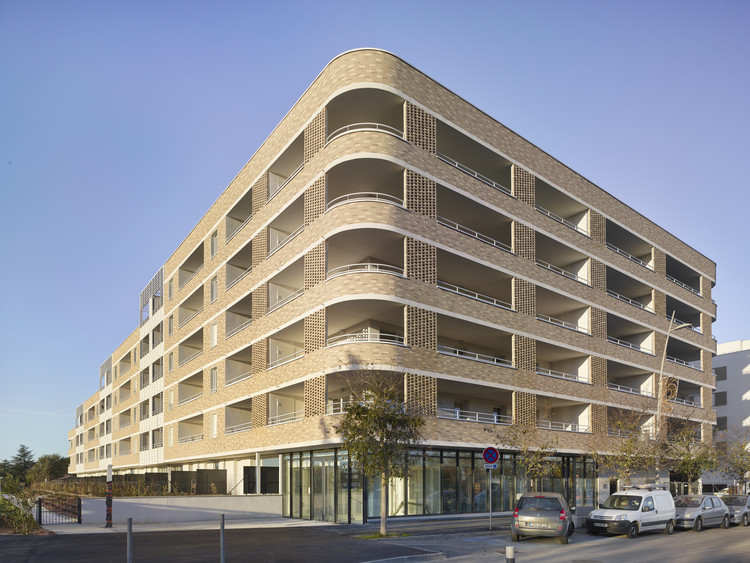 Text description provided by the architects. The plot of the Résidence Caractère is outlined by notable landscapes including a central park and several promenades, offering pedestrian pathways, cycle paths, horse-riding tracks, health and fitness course, sports grounds, and an urban park.

As imposed by the guidelines of the ZAC, the urban presence aimed is that of a continuous façade facing the large open spaces of the park. Varying construction heights allows the project to connect to the urban fabric constituted of mostly individual housing on the commune of Beauzelle to the north. An L-shaped volume takes this form, starting from the main road and wrapping around to the 20m set back imposed from the main landscaped ditch. In the centre of the plot, three blocks of intermediate housing are positioned, echoing the scale on neighbouring plots of the ZAC.

The Résidence Caractère offers two scales of living – collective and intermediate apartments – both accessed by a single passageway that unites the two. This central passageway unfolds horizontally and vertically and constitutes the backbone of the project. Similar to an indoor street, this spacious glazed volume constitutes a naturally light and ventilated hallway offering the comfort of a shared space protected from the elements whilst still opening widely onto the landscape and (more details on the indoor passage below).

The main volume houses 78 apartments as well as office space on the ground floor. On the upper floors, the apartments are accessed via the walkways of the indoor passage that becomes a space to meet and exchange with neighbours. Generous landings with views along the passage or out onto the gardens give access to three or four apartments.

This L-shaped building is cantilevered above the ground floor so as to alleviate the main volume. The curved angles of this volume also help to soften the urban presence of the project. The construction height is terraced from 5 to 2 storeys. This creates a strong presence on the main road, whilst also connecting with the individual housing neighbourhoods of the town of Beauzelle: the project rises to 5 storeys on the Boulevard de Persée and descends gradually along the route de Grenade to 2 storeys at the northern end of the plot, giving prominence to the neighbouring individual houses. The glazed volume of the central passage is also terraced, following the height of the main building. The imposed set-back on the route de Grenade was the opportunity to create a landscaped fringe composed of a flowered embankment ending a rustic grove similar to the gardens of the project.

At the centre of the plot, the project includes 12 intermediate housing units of which 6 are duplex villas individually accessed from the ground floor. The privacy of these units is preserved by an entrance sequence moving from the shared central passage to a private access before each individual entrance.

Large windows create a rhythm on the façade, bringing a maximum of natural light into the apartments while vivifying the brick façade. The three blocks are sufficiently spaced to create a comfortable vis-à-vis and on the upper levels, the windows are staggered to avoid direct views from one to the other. The space in between the intermediate housing blocks also opens the views to the landscape from the apartments. On the second floor, a rooftop terrace is designed to avoid direct views from the upper level through the use of openwork brick walls closing off the loggias so as to filter the views without closing the space off completely.

The materiality of the mixed light coloured brick and the rounded angles of the building give the Résidence Caractère a softness and fluidness that fits in with the quality of life of the ZAC Andromède neighbourhood. The stone coloured brick clads the main L-shaped building so as to assert the urban quality of the façade, which sequenced on the route de Grenade by an alternation of recessed loggia creating gaps and loggias closed off with a white screen of metal louvres. The interior of these loggias is all white contrasting with the brick façade, adding a touch of lightness and finesse to the building. Along the boulevard de Persée, the façade is rhythmed by the continuous loggias sequenced by openwork brick screens creating private storerooms.

So as to accentuate the contrast between the main stone coloured brick building and the surrounding individual housing neighbourhoods, the three-block in the centre of the plot clad in red brick creating a welcoming and cosy inner garden. The grey windows and steelwork contrast with the main building.

Lastly, the indoor passage is built with a white steel frame filled either with horizontal glass louvres in the sections between the intermediate housing blocks, or clear glass panels in the sections above them. This creates a light-flooded passageway, sequenced by different levels of transparency.

Description of the indoor passage. The Residence Caractère is organized around a bioclimatic indoor passageway that constitutes the backbone of the project. This enclosed space, generously glazed and ventilated, changes from season to season. In the winter, the passageway creates a comfortable intermediate space transitioning between the cold outside to the heated inside of the apartments. On one hand, this reduced the heat loss of the apartments whilst also creating a comfortable shared space protected from the elements. In summer, a natural ventilation system maintains a cooler temperature in the passageway creating a refreshing inner garden where to escape the heat. This buffer space also activates the natural ventilation of the apartments. The apartments occupy the full with of the building and thus the difference of temperature in all seasons between the outside and the inside of the passageway naturally activates the air circulation.

We pushed the bioclimatic function of this indoor passageway to the maximum, so as the bring a maximum added value to the project. The technical design of the passageway maximises the energetic performance thanks to easily implemented systems with no impact on the aesthetic of the façade. This buffer volume is created with the use of rotating louvres. The louvres pivot mechanically so as to regulate the temperature by precise ventilation. This ambitious project, on the cutting edge of the “classic” energetic regulations needed the support and expertise of multiple organisations that were consulted during the design process such as the SDIS concerning fire safety, the technical inspectors who followed all stages of design as well as the CEREMA, who is an intermediate between the Ministry of Housing, the Ministry of Health and the Ministry of Sustainable Development (in France). 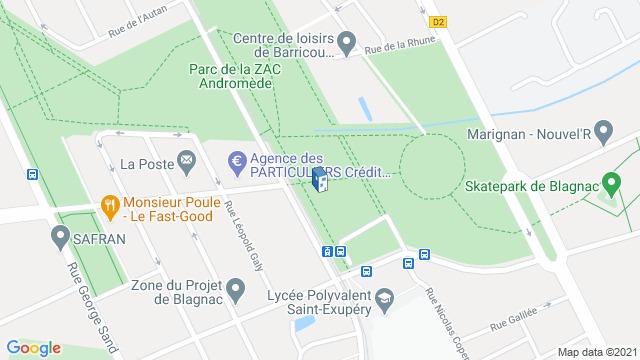 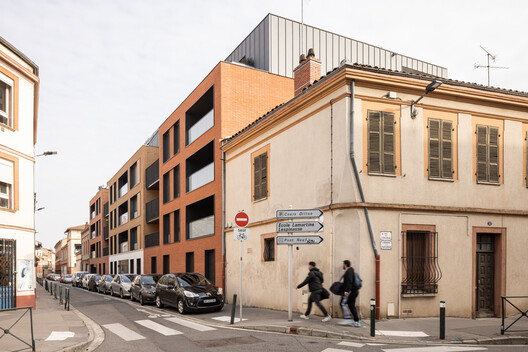