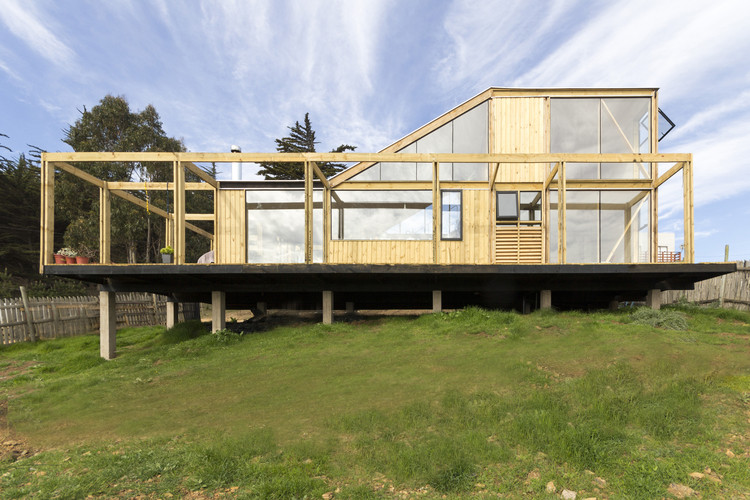 Text description provided by the architects. The project developed a house for a couple, in an urban area of Pichilemu, Chile, with the possibility of being expandable, and with a limited budget.

For this, it was proposed to work based on a construction system in commercial wood, easy to obtain, and that would facilitate rapid construction. One of the most relevant factors to consider was the labor time and the supply of material to the work. Considering a reduced construction time of the project meant designing based on a structural grid that would consider both commercial dimensions, 3,2m of wood beans, and the structural boards to confine the pieces, and obtain a good structural behavior making the most of the materials without executing so many cuts nor wasted material. Thus, the house was designed based on a 4.88 interior plan square, by 12 meters long, dividing spaces into 3m according to the lengths available to fully occupy the commercial beams and timbers and generate spaces within these dimensions that could be habitable.

Another factor that was added to the design was the structure. Based on the same principles mentioned above, a structure was considered that would tie the different parts of the project based on half-timber encounters, and on the axis, so that structural frames were generated and added along to each other, generating a continuous volume that defines the total structure of the house. Also some beams and pillars longer than normal were locally obtained to achieve some larger spans.

The domestic spaces of the house were thought integrated. The living room and kitchen is defined as the center of the house, and articulates all the circulations. This space is compound by two important pieces of furniture: the staircase and the kitchen table.

The building placement in the terrain is parallel to the sea, and the slaughterhouse in the other direction, containing the south wind that constantly blows in the place. This is how the house was integrated into its environment generating spaces to the north protected from the south wind and with guaranteed sunlight. 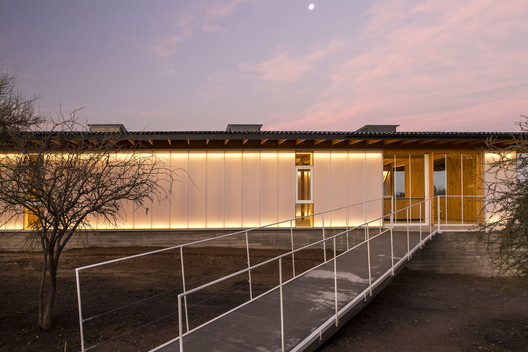