Save
The House of Three Trees / Gallardo Llopis Arquitectos 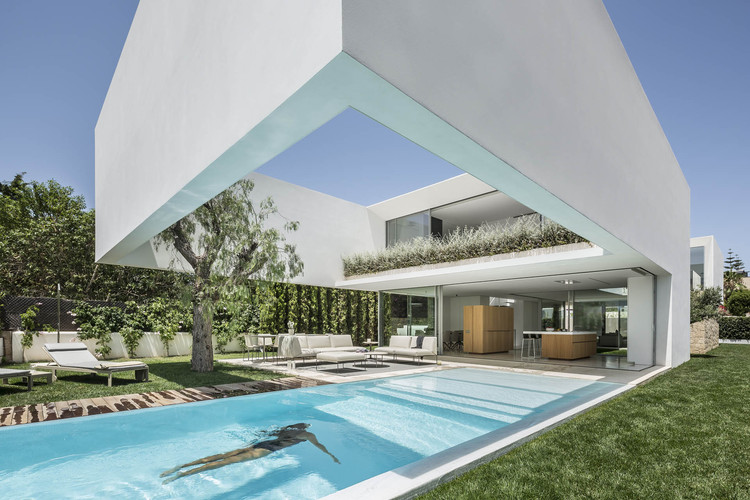 Text description provided by the architects. On a solid foundation of carved rock walls, the rotundity of the prismatic, white, and abstract volume is fragmented by the opening of patios around the slender silhouettes of three trees. Around it, free and fluid orbits the space of the house, protected in the delicate embrace of an architecture that levitates, weightless and defiant, on the interior landscape.

Located in the heart of the island of Ibiza, the plot is located on the urban border of Santa Gertrudis, in an eminently rural setting. The weight of the building tradition acquires in this rocky country landscape its maximum influence, where the white austerity of the cubic architecture of Ibiza is the protagonist among pine forests and small fields that outline the territory. The proposal takes the volumetric axioms of this vernacular Mediterranean architecture as a starting point to initiate its own compositional process with a contemporary architectural language: a set of white prisms on a masonry wall base. Thus, a dialogue is established between architectural abstraction and the tradition of dry-stone construction on which it is based.

With a markedly longitudinal proportion on practically flat terrain and between the landscaped spaces of the adjoining houses, the plot lacks long visuals to which to turn. This condition determines the introverted character of the project, where the architecture must produce its own interior landscape to which it can be opened. Integrating exterior spaces into the building volume is the most effective mechanism for shaping these transitional atmospheres. A continuous sequence of interior and exterior spaces vertebrates the distribution of the house, where the patios appear as a system capable of establishing the desired visual relations between the different parts of the functional program guaranteeing adequate levels of privacy.

The pure volume of the prism is cut out, allowing the formation of patios and terraces at different heights and with different orientations, enriching the spatial experience with crossed visuals and biased visions of the open spaces. Linked to the Mediterranean culture, these protected outdoor spaces introduce the vegetal element in the interstitial areas, with the sculptural presence of three trees as contemplative pieces. With their unique imprint, the slender cypress, the knotty olive tree, and the graceful willow characterize each of the patios, as well as the interior spaces that are diluted around them. The bold structural approach, however, is what gives dynamism to the architectural complex, with energetic volumetric gestures that raise the built masses in flight. These suspended bodies configure the exterior spaces, providing visual privacy as well as solar protection, thanks to the control of the shadows cast. The exterior space, diaphanous and uninterrupted, is thus virtually delimited by the vigorous embrace of the cantilevered patios.

The courtyards arranged at the ends open up on the first floor but maintain the geometry of the main volume on the second floor, closed by means of a metallic lattice -on jib walls- that forms the perimeter that delimits the views of the house, centering them on the courtyards. In addition, at the edges of the forging, it is intended to reduce or hide the edge seen by means of steps and special links, as in the case of the solid slab forging in the patio of the second floor or by means of tuning formed by steel plates, a solution used in the roofing forging.

The house follows a longitudinal axis that goes through the different spaces, from the most public areas to the most private rooms, with the irruption of the patios marking the transition. Water will again frame, with its reflections and changes of tonality, the space to the south at the end of the route: a large garden courtyard embraced by an aerial body that is launched in a risky overhang. The house is organized according to a clear differentiation of the functional program. On the first floor, open and diaphanous, all the uses of the day zone are deployed in full understanding with the landscaped spaces of the courtyards. Thus, the rooms of the living room, the dining room, and the kitchen coexist, between sliding glass surfaces, with the fragrant green of the garden impregnating its atmosphere.

On the second floor, reserved and introverted, the night area opens up to private terraces and delimited patios that preserve the intimacy of the rooms. And completing the set, a basement floor destined, not only to the necessary facilities that give life to the residential spaces, but also flexible and polyvalent spaces destined to the leisure and the dispersion. A place of recreation welcomed in the freshness that emanates from the earth. The lightweight staircase with flying steps links all the levels of the building from the versatile and dark space of the basement to the escape to the blue sky that filters through the skylight, the whole vertical area of the staircase appears as a luminous column in which dance, ethereal, the light metal plates that make up the steps.

The very materiality expresses the programmatic difference between the two levels of the house, with a lower floor, completely open, dedicated to the development of the day zone between dry masonry walls; and an upper floor hosting the night zone between pure volumes that are stamped. The relationship between the rough texture of the roughly carved stone and the smooth white surfaces highlights the balance achieved between tradition and contemporaneity.

Combined between both materials, the grained surface of the wood becomes evident in free-standing furniture and panelling, impregnating with warmth interior spaces ennobled by the solidity and homogeneity of a stone floor that expands beyond the interior boundaries of the house. These limits are dematerialized thanks to the transparency of the large glass planes, capable of sliding until allowing a completely open passage, or making the corners disappear, connecting, without obstacles, interiors and garden.