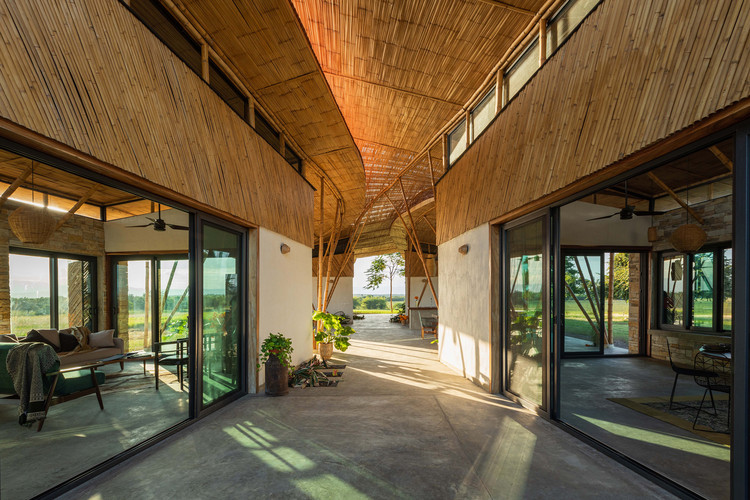 Location. The TRAVERSA HOUSE is located in a cattle ranch in a vast area next to the town Tanlajas (Tan – place / lajas – stones in layers) in the Huasteca Potosi, one of the four regions of the Mexican State, San Luis Potosi. Its climate is warm and humid, with an average temperature higher than 18ºC. The Coy river crosses the land and in the high season, it overflows forming springs and fountains.

The population of this area is of the Teneek ethnic group whose vernacular architecture is considered a cultural heritage of the Huasteca Potosina because of the building materials used, their construction techniques as well as the preservation concepts of their environment.

Guidelines. Conceived as a long narrow strip in the landscape, integrating and blending itself with its natural surroundings, the TRAVERSA HOUSE has three main guidelines. The first one is the requirements of use which defines its type as temporary housing for the owners and friends when they visit and supervise the area. The second one is to achieve a spatial contemporary architecture while using and putting in value the constructive techniques and materials used by the Teneek vernacular housing. At the same time, it has to be in accordance with the studio’s architectural principles honoring the constructive éléments and the study of the context regarding the climate needs of the area.

Startup. Taking into consideration these requirements the TRAVERSA HOUSE takes as its starting point the existing tamarindo trees, the sun’s path, and the wind. With these main lines, the program began decomposing in 4 modules for the social and bedroom zones, articulating it with a system of patios and circulation axis. Because of the diverse users, it was important to establish a spatial organization of the program that would permit multiple simultaneous activities avoiding visual and acoustic encounters. The inclined lines that cross and form full and empty spaces manage to take advantage of the views and the circulation of the wind, framing the landscape and generating ventilated and welcoming spaces. An important project goal was to design a roof coverage resembling the effect generated by the treetops and at the same time defining the mountain lines.

The materialization. The materials used are the Tanlajas stones, the local bamboo “guadua vellutina” known as Otate, (considered one of the most flexible and resilient species because of the closeness of the bamboo rings), and the earth of the ground. To protect the building from humidity stone was used in the external façades. To keep the living spaces fresh and nice, a constructive system known as “enjarre” (bahareque – green building in bio-construction), was used in the interior walls. The roof coverage is separated from the walls to generate natural cross ventilation in the rooms and so avoiding any mechanical system.

In the construction of the roof coverage parallel systems were used, present and vernacular, like curving the beams with the “sangrado” technique and the use of scaffolding and formwork in the structure. Mat or ironed bamboo from the species old hamii were used for the ceiling and bamboo canisters for the friezes. Orejon Wood was used in the woodwork. All materials were harvested from the Huasteca area. 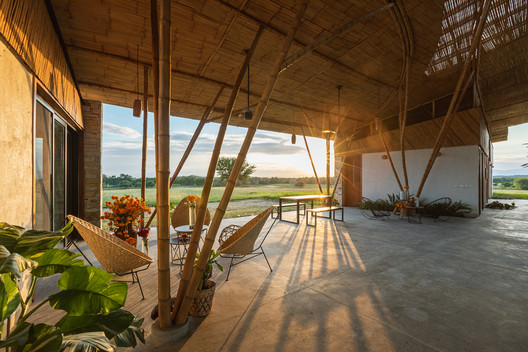