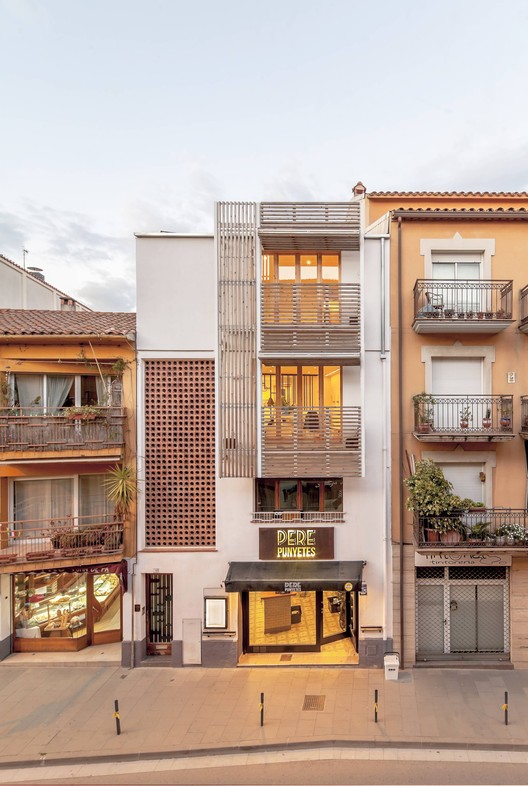 Text description provided by the architects. The project is based on the upgrade of a 70’s three-store multi-family residential building in the center of Sant Esteve de Palautordera, built with structural ceramic walls. A young couple without children wanted a home adapted to their current and future needs. On the access floor (an old warehouse) there is a Kitchen-Dining Room and a small bathroom and washing room. On the top and upgraded floor, there are three rooms (two of them connected and with a less defined program) and a bathroom. The hallway takes advantage of its situation under a higher roof to illuminate and collaborate with the bioclimatic behavior. The weight of the traditional construction roof is replaced with a new light wooden structure due to its low environmental impact and good thermal performance. The new structural system leans on the existing ceramic structural walls and allows a fast construction process without affecting the foundation of the building and, therefore, the activity of the ground floor restaurant.

The materiality responds to the will to respect the pre-existences, as well as adjust to the economic budget. On the existing floor, the old structural brick walls are white-painted to provide some comfort. Only the new bricks used for the construction of the bank were left unpainted. In the upper floor wooden structure, the warmth is sought by giving a fir finish to the structural walls while all those that are not part of it are painted white. The basement of wooden walls stays visible to illustrate the constructive reality of the home. The steel ladder, halfway between the two constructive realities and completely hanging from the slab, seeks lightness to avoid affecting the transparency of the access plant. Next to the access door, a gesture is done to hang up the coats and perform as a bench to remove the shoes. The project seeks dialogue with the environment through the façade. The envelope maintains the color and appearance of the pre-existing building, but an exterior gallery is being placed to permit an exit, control the sun's incidence and improve privacy. A lightweight steel structure, with cladding pavements and mesh sides, separates from the façade the whole set of folding wood slats which reinterprets the traditional balcony and blinds.

The project is based on the "active user/passive building" strategies to decrease the air conditioning energy consumption under 8KWh/m2year. During winter, the large windows of the main façade as well as the possibility of lowering the slats on the balcony allow you to enjoy a great solar capture. This energy is being kept in the concrete slabs, acting as the inertia storage of the house. There are two summer strategies: protection from solar irradiation and a good natural ventilation system. The first one is guaranteed with the façade shading system, where the placement of the slats protects them from direct sunlight. On the other hand, the roof shape is used as a solar chimney. The East and West orientations generate an overheating on the upper part offering a constant airflow evacuating through the top windows thanks to the Venturi effect.