Save
U36 House in a Bohemian Context / TRIMONIS architects 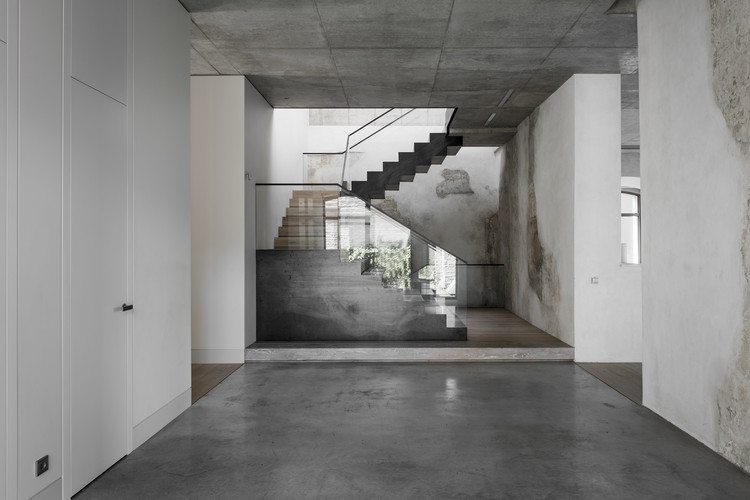 Text description provided by the architects. The short history of the building. In the middle of the 19th century, it was a place, where one of the most disciplined Jewish religious movements was born and developed. During the Nazi occupation in 1941-1944 the synagogue in Uzupis was ravaged, and after that came Soviet occupation during which this desolated prayer house was remodelled into living apartments. When Lithuania regained independence, it took almost 20 years, that someone would notice this Jewish heritage object and do something about it.

Developing the project A.Trimonis aimed to restore the historic scale of the building as the dialogue with the surroundings. It was very important for him to maintain the simple, elementary forms in both the plan and the interior spaces.

The building is located in Vilnius old town. To process with all documentation and receive the local authority renovation approvement is always the biggest issue. That was the case why the project implementation took quite a while. There was a challenge not to lose the main concept and idea of the project, keep in line the chosen materials & colours during such a long time of project fulfilment.

For building reconstruction were used simple, authentic materials which are typical for this area, like clay bricks and tin roof, stone paving in the yard.

All building bricks were made in Lithuania by hands and according to architect assigned dimensions. The bricks colour was adjusted with a mixture of soot and water.

Another idea was to give the constructions of the building not only a function. The building constructions’ elements were left open in the whole building and became the most important form and material creating a mood of the interior. Fair-faced concrete was used as the main construction material.

Non-construction walls were covered by old-style lime plaster in aim to maintain old building spirit.
New constructions and other architectural details were created according to the old part of the house. The key goal was to maintain the simple, elementary forms in all spaces.

The old building was planned and designed according to the nowadays family lifestyle keeping the old spirit of the house. All spaces of the apartment have restored parts of old wall paintings, also old brick and stone walls from the previous synagogue.
The building contains three floors. The entrance to the house leads to the hall and the stairs with the water pool, which are the central figure of the apartment connecting all three floors. Water pool serves as a natural air humidification system for the whole apartment.