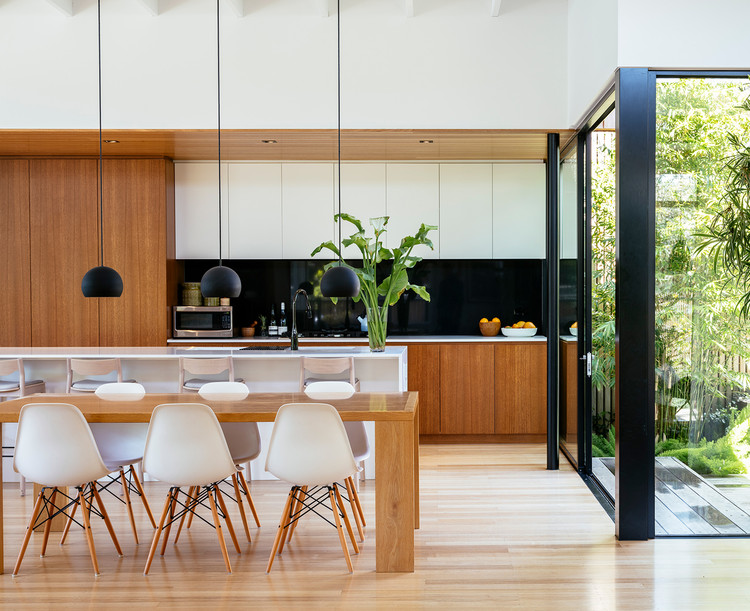 Text description provided by the architects. The Dearie Residence was designed in 1953 by Kevin Knight and survived six decades as an unaltered example of classic beachside post-war modernism. The new owners purchased the property from the Dearie family in 2014 and were passionate about preserving the architectural integrity of the original house, as well as its surrounding mature trees.

The brief was to retain as many of the character-defining elements as possible, whilst incorporating an extension suitable for the contemporary needs of a modern family of two adults and three growing children.

Key to the success of this project was a shared commitment to celebrating the core character-defining elements of an original modernist era home. Existing black & white-painted facades expressed Oregon roof beams, and internal timber wall linings were restored or repurposed, as was the entire original hardwood floor.

The new floor plate embraces the original plan, accentuating its central axis by framing an old Stringy Bark tree at one end and a new swimming pool at the other. The rear of the old building, dilapidated by exposure to six decades of harsh southerly winds, has been replaced by two rugged timber-clad boxes inconspicuously stitched to the building’s rear. A verdant central courtyard interconnects the main zones of the house, acting as a central ‘lung’ and source of daylight within the building’s core.

The additions continue to explore universal modernist themes as relevant now as they were mid-last century. Truth to materials, simplicity, and clarity of form, visual expression of structure, and above all, the delight of natural daylight, shadow play, and reflection. Internal spaces connect to the natural landscape at every opportunity. The new works are like a jazz improvisation on the original, architecture of simplicity and nourishment, a tranquil refuge, an atmosphere that is as timeless as it is highly temporal. All habitable rooms benefit from daylight from at least two sources and a strong visual connection to the garden. This enhances the sense of time passing, contributes to a healthy living environment, and enriches the quality of experience within the home.

The well-orientated building captures direct sunlight throughout the entire day. All spaces along the southern side of the building have windows that open onto the vibrant central courtyard allowing control of natural cross-ventilation. This negates the requirement for mechanical air conditioning and cleanses internal air quality.

This project provides an important contribution to the discussion about the future protection of mid-century modernist homes within Beaumaris. Like many similar modernist residences of the era, this house does not benefit from any statutory heritage protection. The Dearie Residence benefited from custodians who were determined only to pass it on to a party committed to its retention, and the new owners were passionately willing to accept that challenge. Otherwise, this modest yet important relic could quite easily have been lost to demolition, as has been the sad fate of many similar local buildings in the recent past.