Save
The Bobrowisko Nature Enclave / 55Architekci 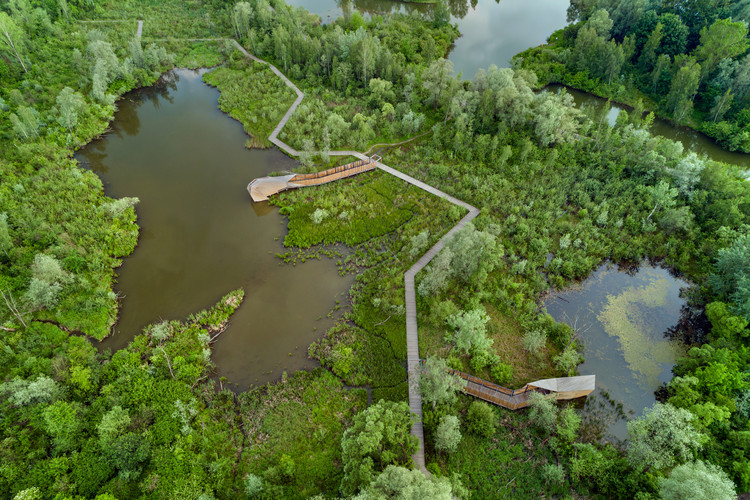 Text description provided by the architects. The "Bobrowisko" project was created to make unique space - the area of ​​a former gravel pit, transformed by natural succession - accessible. The concept of the footbridge located above the beaver lodges, together with two observation structures, is a response to the noticeable scarcity of public places in suburban areas, on the border of urbanization, immersed in attractive landscapes, available to both residents and visitors, walkers, people less abled and disabled and families with small children.

The place is located off the beaten track, in the fork of mountain rivers, and in the intention of the initiators should play an educational role, sensitizing to the beauty of nature and raise awareness of its power (even in the face of anthropogenic damage). A characteristic feature of the space is its intimate, non-invasive nature, which has been preserved thanks to architectural solutions.

The solutions adopted, such as the planned course of the footbridge overlapping wetlands and water, the lack of balustrades - to force the mindfulness of visitors and vigilant observation of the environment. An organic footbridge allows gradual assimilation of the views from different perspectives. The designed route allows to familiarize oneself with the natural phenomenon of Bobrowisko. The planned course and form of the footbridge allow direct contact with nature, emphasize its strength and expansiveness, but also show the viewer its variability and changeability.

The planned approaches to observational structures by wooden paths are part of the scenario of dispensing impressions to the visitor - they are intended to calm the perception briefly, evoke a state of waiting, to immediately awaken it, directing to the most important phenomena - from within. Both watch rooms are located and oriented to previously observed places liked by "residents" - beavers and swans. The irregular form of the observational structures corresponds to the visible natural exhibits, indirectly indicating the direction of interest. Irregular openings in the sheathing allow to hide - small and large - enthusiasts of wild nature from the observed species.

A certain difficulty was the need to enter the route between the animal habitats and the shallowing of the former excavation, and to take account of fluctuations in the water table. Observation objects were tried to be kept relatively small, with complex geometry - reacting to changing lighting, offering various visual access points. Their plating is to undergo slight, but continuous changes, giving in to the organic environment. Watch rooms provide shelter during inclement weather, in addition, they play the role of an open museum with dioramas illustrating the stages of the creation of the place and the most important elements of the natural context.

Raw wood, modest, local material used for construction integrates the object with the environment, physically interacting with its forces by, for example, immersion of plating structures in water, thus undergoing partial - planned decay. Engraved boards bring the richness of fauna, flora and local culture hidden from the untrained eye, providing the necessary information for contemplative and independent experience of the place at any time. 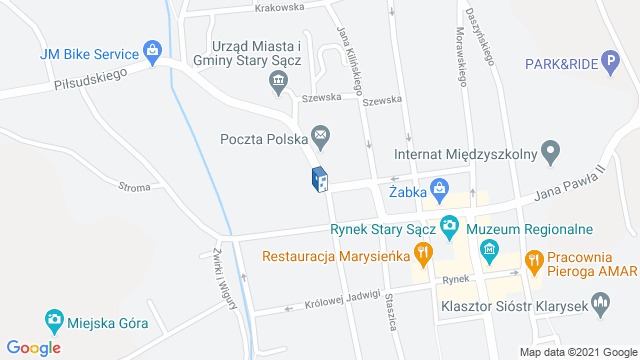 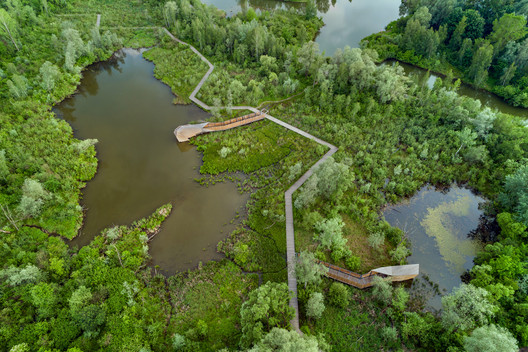