Studio Gang and Denver-based real estate firm Urban Villages have revealed a new mixed-use, 13-story hotel in Denver, Colorado. The 145,000-sf building is called ‘Populus’ and will be located next to Civic Center Park. Opening to the city and the Rocky Mountains beyond, the hotel aims to become a new social center in downtown. On it's prominent corner site, the building was made to connect Denver’s civic, arts, and commercial districts.

As the iconic element of the project, the hotel's windows take on a distinctive shape informed by the growth process of aspen trees, a symbol of Colorado. As the trees grow, they shed their lower branches, leaving behind dark, eye-shaped marks on the papery bark of their trunks. The team explained that the windows grow up to 30 feet in height to frame entrances and views into the lobby, restaurant, and amenity spaces. "Each vertical scallop is the width of a hotel room, and its windows change in size in response to public and private spaces."

On the exterior, the “lids” of each window stretch outward according to solar orientation to shade the interior and improve the building’s energy performance, as well as channel rainwater. Hotel guests will experience views of the nearby State Capitol and Civic Center Park, as well as the mountains beyond. Some views also show occupiable windows, transformed into seating or desks. Above, Superbloom is creating a green roof terrace that will provide a place to socialize and create a habitat for local wildlife and insects.

“Forming an essential interface between inside and outside, the distinctive windows expand the hotel rooms to the city and Rocky Mountains beyond,” said Jeanne Gang. “Their shape is inspired by the growth pattern seen on the iconic aspen trees of Colorado, whose branches produce ‘eyes’ on the trunks’ surface.” The project is currently in the building permit process. Construction is expected to begin later this year with the goal of delivery in 2023. 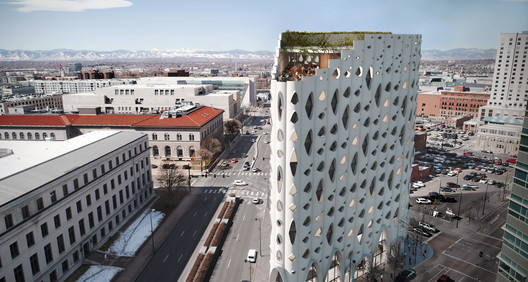