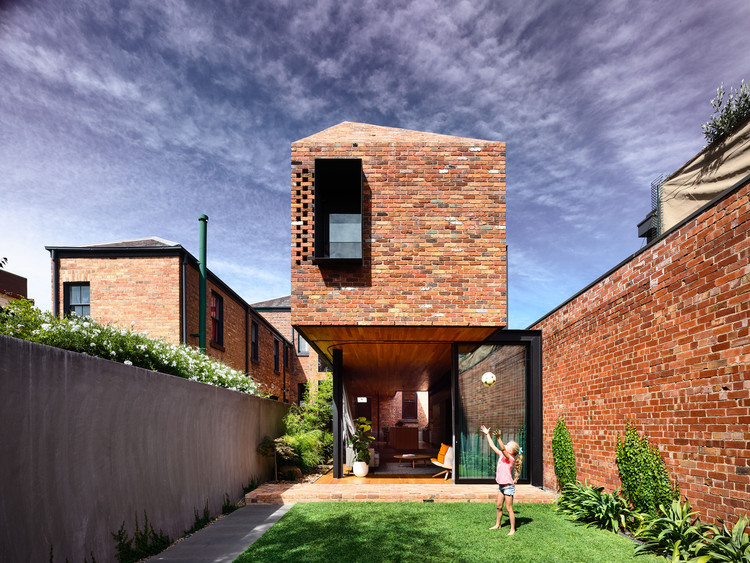 Text description provided by the architects. North Melbourne Terrace is the story of an existing inner city A1 listed Victorian Terrace house that had been virtually unaltered since it was built. As with all Victorian Terrace housing, the typology was extremely effective at providing consolidated high density housing in London and many other ‘Victorian’ cities but whose sense of enclosure and lower quality ‘piggy back’ structures mean they are prone to adaptation and (especially in warmer climate countries such as ours) opening up to a more flexible living programs.

Almost a century and a half on, this particular house (one of a heritage listed pair), is located just off the corner of the CBD & required expert heritage consultation. As part of our own heritage investigation, we catalogued & researched the history of this house but also the evolution & iconography of building fabric and forms in the neighbourhood. We wanted to ensure that the original fabric remained true to its time and told a story of its past but also that any new work was born from the story of the old, bringing the home into current day so that the story could be told for years to come. The result is realized by weaving a new program within the old re-purposing existing rooms and adding additional family space where planning and heritage guidelines allowed.

Being a long narrow block located adjacent to several different neighbours‘ conditions’, the envelope and layout are largely an outcome of the planning condition. Nips and tucks, in and out along the length of the site are used to advantage to bring in light and enable ‘breezeways’ & side gardens through the centre of the house. Levels are manipulated over the sloping site - via cutting and filling – to allow ample ceiling heights and help designate & define spaces within an open and free-flowing ground floor.

From a heritage viewpoint, the approach was one of revealing and restoring wherever possible as opposed to applying the new fabric. Within the existing parts of the house, rooms are sensitively re-plastered with minor adaptation. The front Drawing room facing the street observes the ‘best room in the house’ edict & utilizes a dark moody floor to ceiling paint finish to accentuate the height and detail of the ornate plasterwork – remembering the 1880’s property boom & gold wealth. A similar approach is observed upstairs in the Main Bedroom where minor adaptation internally re-purposes the room behind to cater for a new WIR & Ensuite.

The hallway at ground level was restored and reveals exposed brickwork within the cut out of an original (perhaps implied) opening to its historic neighbour, providing a hint of the new works beyond and a backdrop for the family’s accumulated art and sculpture. As one moves through the hallway into the new environs a sense of visual exhaling provides an immediate sense of light, air, and space. The existing environs bleed into the new with a seamless white lacquered cabinet extending from the foot of the Victorian staircase (replacing the previous moulded and panelled doors) through to a delicately curved & concealed L’dry storage that extends deep into the new space.

Observing the heritage edict of revealing wherever possible, paint was removed from the rear facade of the existing building to expose the original red brick. All bricks removed from the adaption of the ground level of the rear wing are re-used in the new works following a policy of ensuring that the new building came intrinsically out of the old. Similarly, a decision was made to remove the remaining hard plaster from all original internal wall surfaces rather than re-plaster preferring to expose & illustrate the history of construction and alterations over time. Materials used internally delight in their honesty and rawness - oiled local Australian timbers, burnished concrete and dark timber veneer cabinetry depict a relaxed yet crafted interior.

The palette is overlaid with furnishing and objects that are contemporary & have a link with the front of the house with a preference to not over style. Toss B white pendant lights hang from the second level ceiling bringing verticality but also daylight down through the internal void providing scale and connection with the hallway to children’s bedrooms above. Upper ceiling roof glazing is installed to wash daylight over the fissures of the historic brickwork and to bring light deep into the ground level interior.

In a play on some of the curved ‘Boom Style’ elements within the existing house, a curved timber balustrade & kitchen joinery elements provide sculptural touches through the centre of the house. The openness and informality of the rear Living areas appear as an undercroft ‘scooped out’ allowing a sense of space that reaches to the extents of the property boundaries which bringing the landscape inside. Internal fiddle leaf plants, tuft woolen rugs, and an ochre Urquiola Husk chair espouse a feeling of relaxed & textured contemporary Australian living.

Externally the language and form of the addition are contemporary yet a simplified regionalist play on the iconography of the back lanes of North Melbourne where brick piggyback structures and brickwork additions (sometimes with ornate patterning) are prolific. Here is a simplified and abstracted version of the original the form and fenestration are very much in context with the neighbour. Yet with fascia, mouldings and gutters removed and a brick-clad roof the new work reads as one simplified form – walls and roof as one form one material. Expressed steel and hit and miss brickwork that returns to the side elevation bring function (privacy screening) and provide depth & interest. Underneath the form is ‘edited out’ allowing transparency and open living spaces that embrace the landscape.

This house follows a holistic design approach that simultaneously considers the combined experience of Architecture, Interior & Landscape, where the narrative of history envelops you & is tangible yet in no way wishes to compromise a rich, textured and comfortable inner-city Living environment for a family of 5. 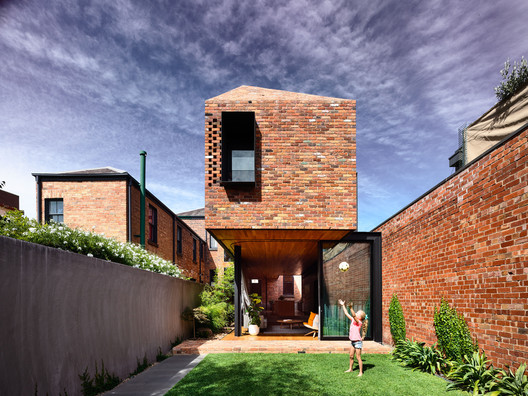