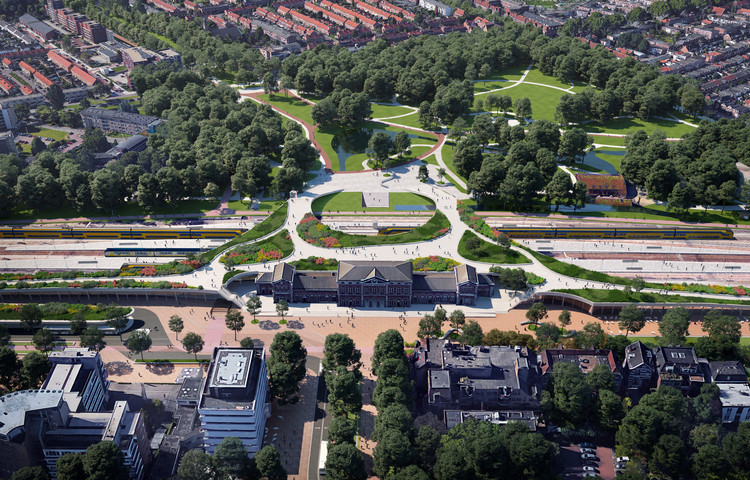 As the team explains, the current railway zone is a barrier in the city with noise and safety challenges arising from freight transport. The new proposal transforms the railway into a destination that connects existing neighborhoods with new green areas. "The vision builds on the beauty of the oldest city in Holland, the nature of the Dutch Delta, but also raw elements such as infrastructure, railways and industry."

In the vision, the Stadsbrug transforms from a motorway into a high-level green city park. The greenery of Weizigtpark connects across the railway, enabling access into the city center. As proposed, Dordrecht Central Station would be the greenest station in the Netherlands. "The new residential areas will be built entirely from wood sourced from production forests on the island. This is one of the examples of strengthening a local and sustainable economy." The plan imagines the city's transformation over the next twenty years until 2040.

"Dordrecht will be known as a city of wood, of trade and innovation, the symbiosis of nature and urban development, water, events, sports, cycling and walking. A city that shows how we can resolve the major challenges of our time. Spoorzone Dordrecht will be the guiding principle for the development of the city in the coming years."