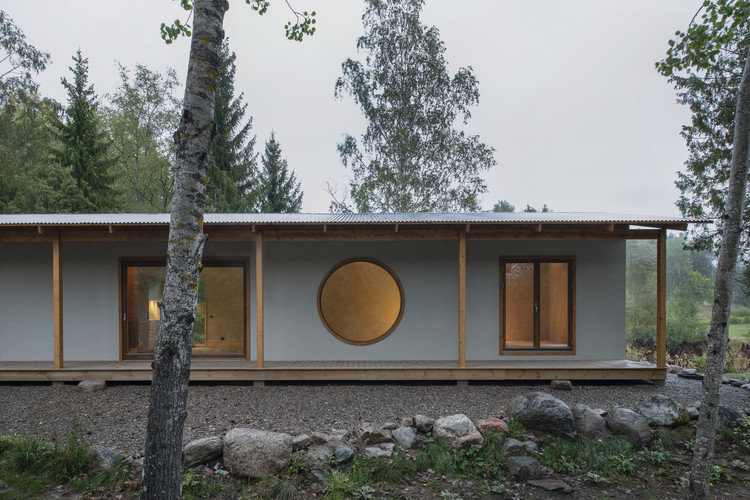 Text description provided by the architects. House RR is a summer house for a young couple and their two children, seeking a retreat that would allow them to escape the city. Situated south of Stockholm, in a pastoral landscape characterised by mixed forest and open fields, the house features an elongated interior space that is loosely divided into social and private spaces. The architecture of the house and its garden creates a world of its own, where holiday life can unfold.

Approaching the site, the house appears as a small, pitched gable that sits atop a gently sloping hill facing a field. Moving up the hill and into the garden reveals the main facade, fronted by the veranda. “Rather than facing the landscape and the view, the house turns inwards towards the forested site. The facade facing the garden, subdivided into five bays by timber posts, lends the house an almost monumental appearance despite its modest size,” says Einar Rodhe, cofounder of Norell/Rodhe.

Providing an extensively covered space in-between interior and exterior, the veranda creates an order of posts and rafters to which large, differently shaped openings in the facade behind relate. In addition, it creates a backdrop against which domestic life, as well as the vegetation on the site, unfolds.

The sense of order that the exterior brings is loosened once one enters the house. The interior is one long, open space that has been furnished with four smaller mono-material masses. Together with shifts in floor level, these masses loosely suggest rooms spanning the full depth of the house. The entrance hall and living area are separated by a cylindrical volume containing wet areas. Private areas located towards both ends of the interior area defined by storage volumes. Each room is further emphasized by a window or sliding door that connects to the veranda and frames a view onto the garden. Overall, this arrangement creates an informal relationship between rooms as well as between indoor and outdoor areas.

The relaxed nature of the spatial layout is reflected in construction techniques and the use of plain materials throughout the house. “We wanted to create a varied and multifaceted interior, where different masses and elements are made distinct through their materiality and coloration,” says Daniel Norell. The floor on grade with the veranda exposes the concrete foundation, while raised floors are in soap finished pine. Storage masses are constructed from reused closets clad in stained fibreboard, and the curved wall belonging to the bathroom is in marbled cork. The ceiling binds the different areas together through a rhythm of birch plywood panels.

The use of plain materials continues on the exterior. The roof and veranda are constructed from standard lumber, capped by thin corrugated aluminium. A loosely bound area of gravel that can be appropriated for dinner parties as well as games play surrounds the house.

Beyond, the existing conditions on the site are subtly cultivated as well as complemented. Situated on an esker, the site features plenty of small boulders, once tumbled by glacier ice. These boulders are used in the landscaping, for demarcation, retention, or as steppingstones. 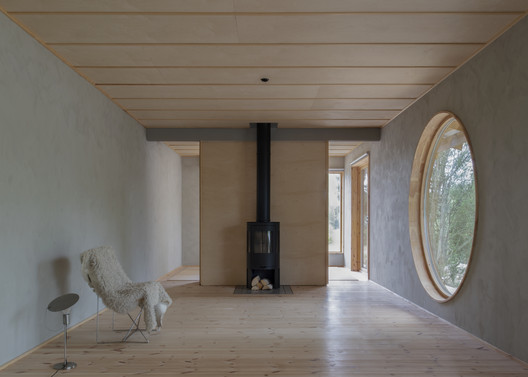