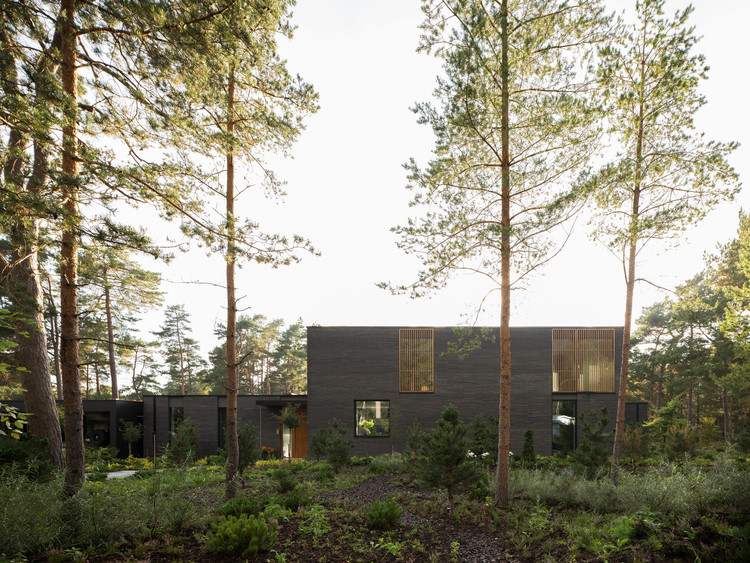 Text description provided by the architects. With Villa Tennisvägen, Johan Sundberg Arkitektur has designed a highly refined milieu where​ intimacy and togetherness​ play a central role. Specially designed solutions and unique details make for a home that is anything but ordinary.

Situated on Scania’s southern coast, Ljunghusen is a locality renowned for its sandy beaches and the surrounding ​Ljungskogen ​pine forest. At the heart of this forest lies Villa Tennisvägen. Dark grey Kolumba bricks give the facades a natural variation, creating a house that is subservient to its location. In the evenings, the brick blends visually with the tree trunks and recedes from focus, becoming one with its surroundings.

Villa Tennisvägen comprises several interconnected volumes arranged in a U-formation, which envelop an inner garden with an open pool area framed by greenery. From the outside, the house has a cohesive and relatively closed character, while the interior feels welcoming and is characterized by light, space, and generous views of the garden and surrounding nature.

Every part of the house is designed with care. Nothing is hidden. Even the spaces which serve everyday functions are given life. The laundry is accessed through a long corridor with high glass partitions that open directly up to the garden. Both the family and guest entrances are equally welcoming. No single aspect is less important than another.

A great deal of the interior fittings are designed by the architect's office and made specifically for the site. While each space has its own character and is adapted to its function, the material palette is cohesive, presenting only a select few materials. The dark brick and dark gray aluminum of the exterior stand in stark contrast to the interior, in which warmer materials, such as oak and cedar, are introduced. Across the house, a consistently high level of detailing ties the material palette together.

Villa Tennisvägen is designed for a family of two parents and two children. A generous living room, centrally located within the house, is the stage for togetherness, where the family watches TV and hangs out. At the same time, the adjoining kitchen is fully visible and perfectly suited for socializing and large dinners. Due to the arrangement of the house's volumes, the ground floor spaces become interwoven so that moving through the house is more akin to an alluring amble, with constant contact between interior and garden.

The social spaces on the ground floor are linked to the parents' private spaces through a staircase, discreetly positioned at the intersection between the principal volumes. This upper level is considered as a separate suite, the parents’ private sphere, from which it is still possible to maintain an overview of the social spaces. Moving between spaces for socializing and contemplation is effortless, making Villa Tennisvägen, simply, a house which is easy to live in.