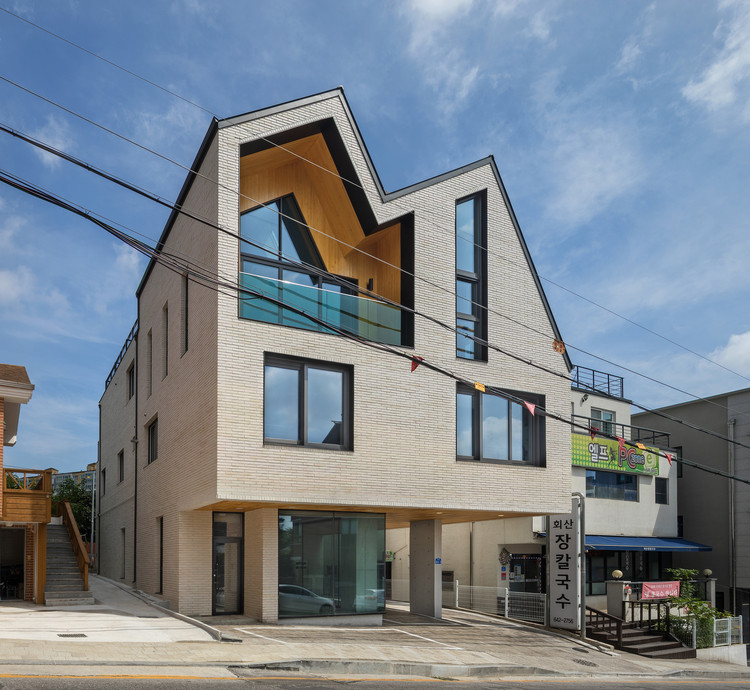 Text description provided by the architects. In Korean legends appear so many stories about traders of cattle, salt, silk, and trinketry, but nothing about a brick trader. In British fairy tales, however, a brick house is regarded as a model of robust house as exemplified by the third pig's brick house in Three Little Pigs. In Korea, bricks were used for tombs or burial mounds in the ancient times and with stones for the royal palace gates or Suwon Hwaseong Fortress in the Joseon Dynasty. Now easily available everywhere, bricks are affordable so as to be used for structural or decorative materials.

However, they are vulnerable to lateral forces and so should be used with earthquake-proof stiffening structure. The traditional Korean term signifying a trader is "Jangsu," which was described as a mean occupation in the past but now is regarded as a professional supplier who sells a specific item of objects. Nowadays, no Korean refers to such a person as a "Brick Jangsu" or a brick trader but we decided to name this house "A Brick Trader's House" as a familiar expression.

After working on BomBom Boutique Hotel, we have designed buildings by utilizing many bricks as the exterior materials and built a friendship with the brick trader, for whom we naturally came to design a house. Also in this project, we used bricks as the exterior materials, specifically old white bricks chosen to brighten the client's life and change the dark atmosphere of surroundings in the urban center. Our focus was not on showing the various materials of a multi-use building, but on using bricks, exposed concrete, and a tiny part of wood for the balcony. We created a small loft on the rooftop, and to make a vertical space at the living room, projected into the façade the topographic character of three mountains with the staircase, the living room, and the loft, all of which constituted the mountainous shape of the roof.

The clients, the brick trader and his wife, have long worked on selling bricks and commissioned us to design this project to prepare the house for their later life with stable rental incomes. We made the house for the couple on the 3rd floor, the rental units of 1.5 rooms for three households on the 2nd floor, and a small shop on the 1st (ground) floor besides the parking lot. A half of the roof was made into a sloped one, while the other half was made flat to accommodate various activities to happen on the rooftop.

Given the earthquake frequently occurred in Korea these days, we used reinforced concrete for the main structure and applied decorative brickwork for the exterior materials. While most architects nowadays share a preconception that using expensive bricks makes a good house, I as an architect find whether their price is high or low would not be significant if they had the colors, material properties, and the way of masonry fit for the design. Sometimes it would be necessary to use broken bricks intentionally to create an old image although it could reduce the potential of water repellency. Otherwise, for a building like a house which could be conveniently maintained, it would be necessary to find and lay such bricks as to have clean surfaces and high water repellency as well as the color harmonized with the surroundings. 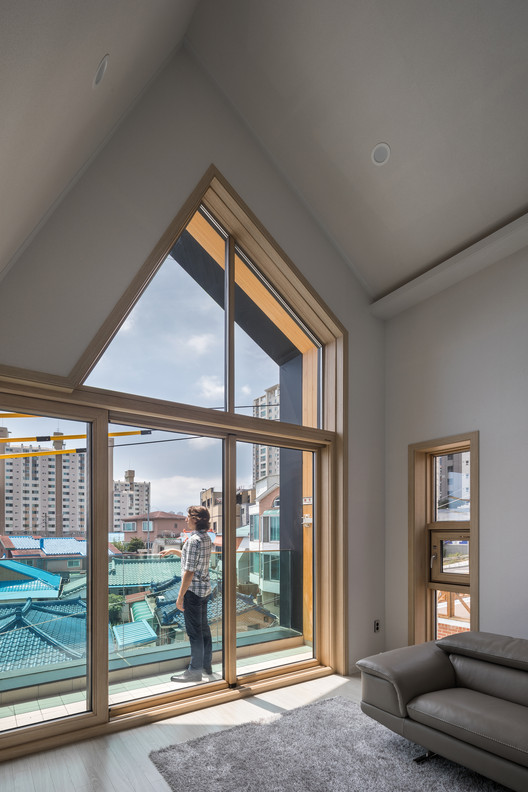 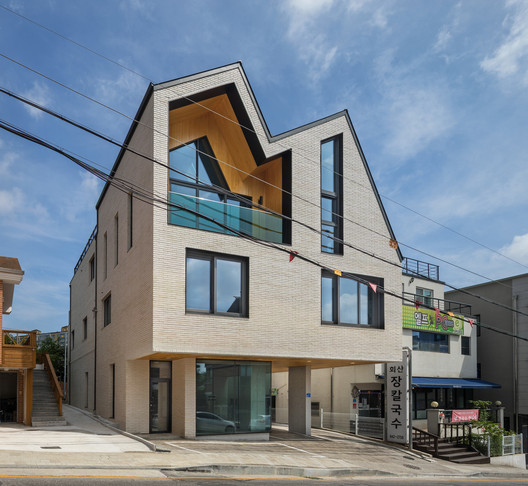