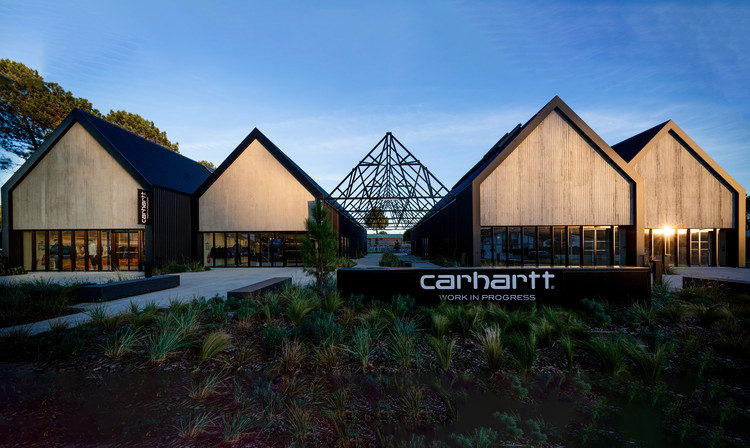 Text description provided by the architects. The new CARHARTT WIP complex is a multi-purpose site made up of sales space as well as storage, a catering area and adaptable surfaces for exhibitions and other versatile events.

The project is presented as a succession of 4 elongated halls, arranged two by two and connected visually by an openwork metal structure. Each hall is built identically, from a simple but contemporary architectural creed echoing the traditional Landes longères, whilst also reflecting the industrial architecture to be found throughout the surrounding industrial estate.

Each building is finished with the same matte black metal facade which lends the project its homogeneity. This ribbed metal cladding joins seamlessly at the roof and is perforated sporadically across certain windows to preserve the intimacy of interior spaces.

The halls have been constructed based upon a single structural model, identifiable by their expressive gables which, staggered along the avenue, punctuate the main facade. These gables are made of molded concrete and each constitutes a single block of 20 tonnes.

The "irregular" arrangement contributes to the singularity of the whole and affects a fragmentation of scale in the structure. The halls, aligned in pairs, are arranged along an exterior central mall, which brings the public together, extending from the pedestrian square created at the center of the project. The openwork structure, which overhangs this interstice, will serve as the support for the growth of plants, with an abundance of greenery creating a living, breathing space.

Inside, the spaces are raw and white in contrast to the exterior finish. All the walls are constructed of concrete blocks, painted the same color as the structural and technical elements, which are all visible. All of the spaces are naturally lit with diffused light from the generous glass windows arranged on the northern slopes of the roofs. The sales areas also have subtle LED lighting.

The functional furniture comes from industrial suppliers: bars and clamps from scaffolding and galvanised industrial metal shelving. This is factory stock furniture, utilised in an atypical but considered manner. The raw,

industrial aspect is counterbalanced by the use of noble materials such as Ceppo di Gre stone, strikingly utilised in the construction of an oversized checkout counter. Pine plywood, another construction material, is sparingly present and worked with care.

For the flooring, the concrete has been sanded, revealing the pebbles contained within and providing a Terrazzo effect.

Regarding the environmental aspect: the design, implementation and orientation of the project have been developed giving equal consideration to the site, it’s function and the climate. The predominance of natural light serves as testament to this in tandem with the ventilation system by means of automated skylights.

A geothermal system has been implemented via 12 boreholes each with a depth of 100 meters, coupled with dynamic slabs in the buildings, making it possible to heat and cool all spaces in all seasons. Photovoltaic panels concealed in the roofs complete this system. The design ensures an autonomous building with low energy consumption. 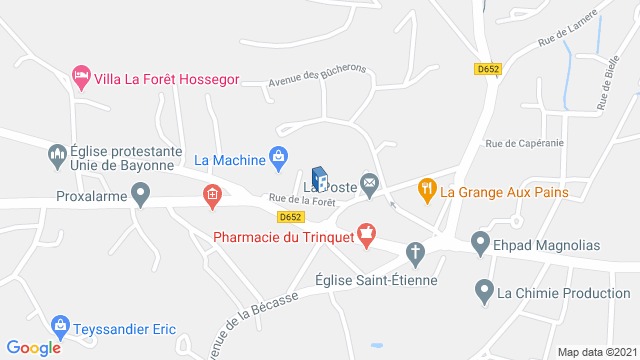