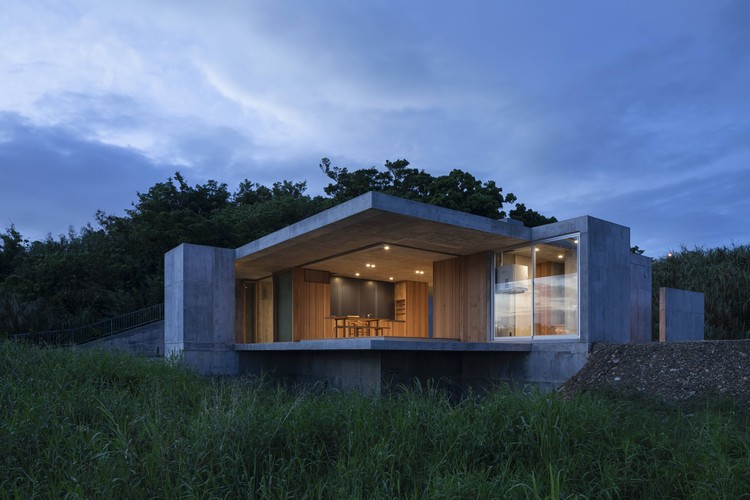 Text description provided by the architects. A house and workshop for a couple and three children. The site is located on a hill overlooking the sea on the south side of the southern part of the main island of Okinawa. In the future, the owner plans to expand children's rooms, stores, garages, etc. in response to changes in lifestyle, and wanted a relaxed and open house that could flexibly respond to future expansion plans. Also, since he spends most of his day in the workshop, he wanted a way of living where he had a job as part of his life.

The layout and function of the building will be planned based on the flow line and relationship with the volume to be expanded in the future, and the minimum necessary space such as around the water, the hall that is the core of life, and the workshop as a workplace will be created inside.

A large terrace was set up to connect them. The roof that covers the house and workplace creates a deep shadow protected from the intense sunlight of Okinawa, and the movable fittings bring variability to the place of creation and living, increasing the freedom of living together with work and housing. The hall and the workshop are independent and continuous at the same time, and are used in various ways.

It is also used as an extension of the workshop from the response of visitors, and it also becomes a playground for children, and the activities of living can be freely expanded and connected to the outdoors as it is. I am looking forward to seeing how this house will change the life of work and housing in relation to the various places that will be added in the future.