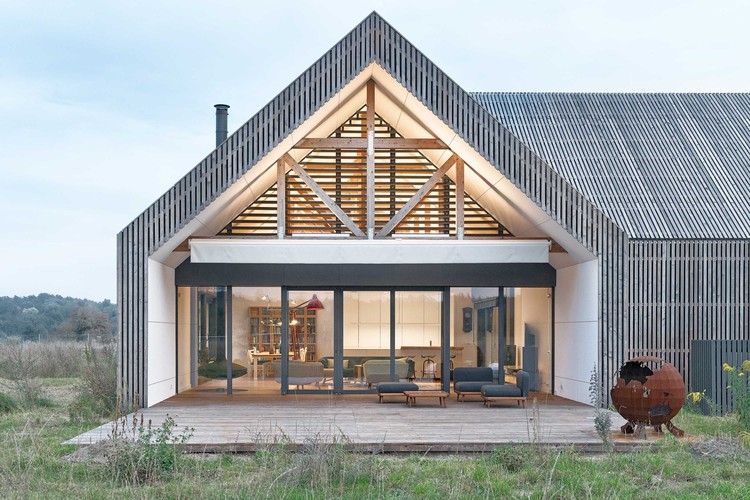 Text description provided by the architects. PL.architekci designed a house in Poznań with a barn-like look for Karolina. She had a dream of building a house allowing her to fulfil her passion for horseback riding and everything country western which all began with her love of Hollywood films about the Wild West. Karolina started with finding a perfect plot of land on the outskirts of Poznań, 30 min drive from the historic city center. In her free time apart from horseback riding (she owns a horse named Bystry ("Bright")) she collects cacti.

She started when she was 8 with a gift from her parents. Until today she owns 82 of them. The architects managed to fit such a building into the landscape by not competing with the surrounding environment and by letting the architecture complement the environment. Thanks to that the house is not like a monument in the middle of a field.

The shape of the building – it is so simple that it could be drawn by a child, and at the same time resembles traditional rural buildings from the vicinity of Poznań. There is no room for chance – the roof is smooth and chimneys and all installations are hidden. According to the modernist principle, the less, the better, there are no embellishments, ornaments. As for the façade, the house is in the style of a barn, so it is wooden, made of raw larch, unprotected by anything – it will naturally age. It will go grey, there will be blemishes, it will become similar to the trees that grow around.

It is only under the wood that a sealed structure is hidden. Siberian larch used here is characterized by very good durability. It is very dense, so it does not absorb water or moisture very easily – it is estimated that raw larch should be impregnated with oils approximately every 20years. You also do not need to clean it, just remember that from year to year will overlap an increasing patina. The owner wanted the living room to be traditionally facing south to let in a lot of sun. The designers proposed an opposite solution by reversing the perspective precisely because of the landscape.

From the north-east the house faces the most beautiful view – a meadow, trees and a small river, so there is the largest window. But ultimately the house has glazing from all four sides. In addition, there is a lot of wood inside, this time ash, which has an exceptionally beautiful grain. The floor was made of ash breath, 8 meters long, which is the entire width of the house. The roof truss is wooden, and the top of the kitchen island has been replaced with a raw piece of plank.

Black frames in large windows are not accidental – they frame the landscape and thus the interior connects seamlessly to it. In the private part, the bed and bath stand right next to the window, so that you can observe nature. In the garden only a few trees were planted, and the rest stayed, what it was – a wild meadow. Even the path was made of the usual dirt stones, between which the grass grows. No smoothing, trimming under the ruler.