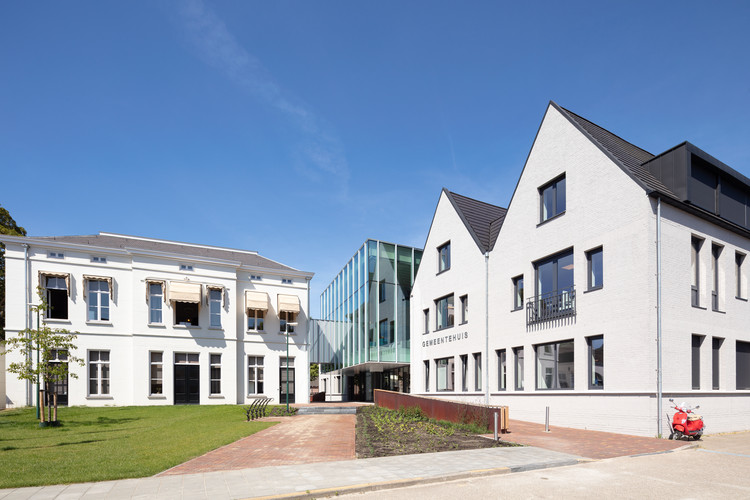 Text description provided by the architects. With a newly added volume including the Council Chamber, Reset architecture has reorganized the town hall of Geldrop- Mierlo (Dutch town next to Eindhoven). This transparent meeting centre communicates the public nature of the building and engages the citizens with the municipality. Internally, it is the core of the building complex where visitors, the council and civil servants come together.

Program. The town hall of Geldrop-Mierlo has been completely renovated and expanded with a multifunctional meeting centre including a council chamber and meeting rooms. Furthermore, a renovation of the building was needed, making it sustainable and a suitable workplace. Reset architecture was also asked to improve the architectural expression since the building lacked the appearance of a public building and did not clearly communicate its function as the town hall.  The town hall consisted of two connected building parts; a listed nineteenth-century villa and a nondescript eighties office building carelessly attached to it.

Exterior. Reset architecture detached the villa to emphasise its historic qualities and to create a clear entrance to the town hall. With this rearrangement a new spatial clarity arises in which the villa and the newly added volume together form the public entity, centrally placed between the two office wings. This unity is reflected in architecture.

The new extension continues, in abstract and refined detailing, the architecture of the eclectic villa with its symmetrical order and vertical articulation. Also in position, the new arrangement emphasizes its function, the meeting centre at first floor protrudes beyond the office wings. The prominent cantilevered transparent façade communicates the inviting public character clearly.

Interior. The interior of the new bright meeting centre is open to the surroundings and connects to the green landscape with a beautiful view of the castle of Geldrop. The entire centre has an open and spacious appearance with meeting rooms on two floors and a lower, more intimate part, with the Council Chamber.

The cohesion of the elegant space is enhanced by a continuous rhythm of columns in the four facades and all- round light through the glass facades. This carré of columns subtly positions the new space between the existing office wings outer walls. Spatially they appear to be load-bearing but are only a curtain wall construction.

The lightweight superstructure is built upon existing columns and foundation. Reset architecture has proposed a T-shape remontable steel structure with a wooden floor and a steel roof. This clear construction scheme contributes to the logical embedding of the program in between the columns grid. The routing is located outside the columns and surrounded by the columns of the façades.

On the longitudinal side, a façade strip of oak slats has been installed to hide the connection with the office wings gutter. Maybe the oak provides a mental connection with the woods outside but surely it contributes to a warm atmosphere experience of the space, which furthermore consists of calm gray tones in its finishes.

Sustainable Renovation. This project is a best practice example for a sustainable renovation. The building is all-electric, with EU energy label class A +++. The new volume reduces the number of facades of the existing office wings and has been insulated using triple glazing and a thoroughly insulated roof. Moreover, the required heating capacity of the existing office wings has been reduced by insulating the roofs and walls, replacing the glazing and sealing other gaps. All of this has reduced the required heating power by approximately 60%.

The town hall is heated by low-temperature heating connected to air-to-water heat pumps. An additional VRF system further extends the ability to heat or cool the building. The air handling units for the ventilation of the building are fitted with heat recovery elements. Adaptive LED lighting has been used to further reduce the energy usage of the building which is to a large extent generated by PV panels.

Sustainability is more than saving energy. The new construction is carried out in a light, mountable structure in line with a circular way of thinking. During construction, (demolition) parts are reused immediately or made available for reuse. The project makes a small, contribution to the biodiversity in the built environment. Bat and swallow boxes have been built into the north facade of the renewed gable ends.

Facade Detail.  The universal appearance of a curtain wall, as an addition to the building complex, has been gratefully used to clearly communicate the public function and inviting open character. Nevertheless, the curtain wall detailing is not standard, the system has been refined to ensure that the universal also matches its context. The design of the new building shows a far-reaching abstraction of the vertical articulation and corner pillars in the eclectic villa.

The roof edge, which is mirrored as the bottom edge of the cantilever, is the defining detail. At the villa, the eaves are exuberantly rich and articulated. In the new building, the utmost has been done to design a refined appearance. The façade consists only of frames of the curtain wall, without further lines of the roof and foot edges. The combined roof molding and structural (triple glass) glazing show elegant paper-thin lines. The open corner accentuates the sharp top corner and shows affinity with the profiled cornice of the villa.

Interior Detail.  The curtain wall system is used all around as a light-footed but also the formal demarcation of the space. The unique character and unity of space is evident by the continuous rhythm of the colonnade in the four facades.  On the long side, a facade strip of oak slats has been applied, with which the constructional connection with the existing office wings and its gutter is hidden from view. The wooden slats come back in an acoustic variant in the balustrade of the mezzanine on the 2nd floor. 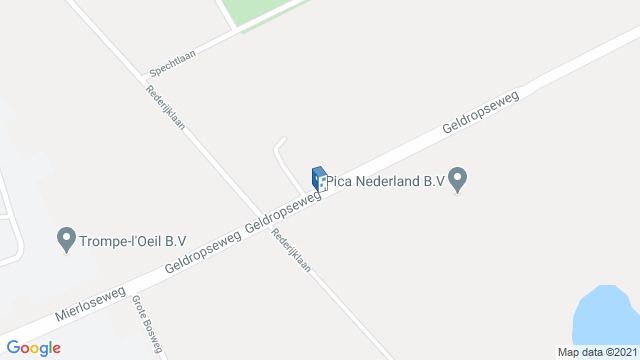