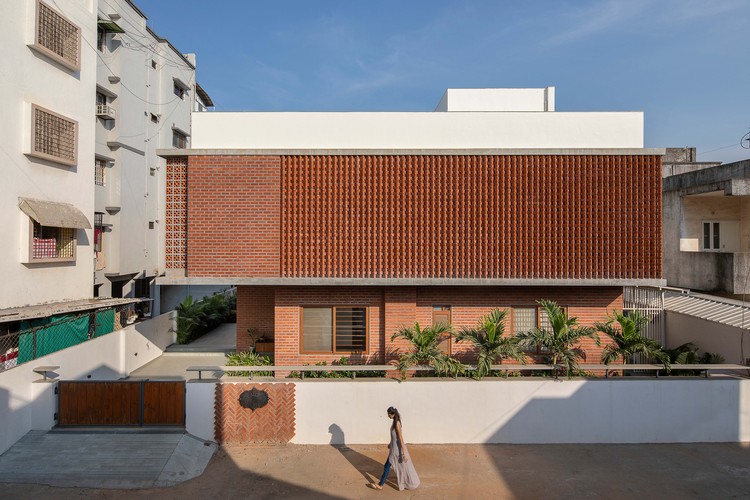 Text description provided by the architects. A house should reflect the taste and the personality of its owner as well as the ability of the architects to make the whole come together and form a space fit for its occupants and its context. And that’s the philosophy we followed while designing this residence. The house follows a subtle Indian and earthy aesthetic as per the client’s taste, and has been designed keeping in mind the climatic conditions of the place.

The shape of the house was defined by the site dimensions which made it a square shaped structure. This was planned around a little courtyard keeping in mind the hot and dry climatic conditions of the region. Due to the square configuration of the house the road-facing façade came to be a long wall facing the southern harsh sun. To do away with this problem a brick screen was introduced in this façade which acted as a double wall and created a buffer space between the living spaces and the exterior façade. Moreover, this exposed brick screen was designed with a diagonal orientation of the bricks to avoid the direct sunlight and to facilitate the flow of S-W winds.

The material palette of the project consists of earthy materials such as the Kota Stone, terrazzo tiles with a plenty of wood and a dash of cane. The kota has been used in different colors and finishes such as mirror finish and river finish to define the different areas. Along with this the terrazzo ‘galicha’(carpet) tiles have also been used to distinguish areas such as the dining area.

Even the furniture and the fixtures have been carefully selected to match the Indian aesthetic, for example the Anglo Indian Handi lamps in hanging in the courtyard and the swing in the covered terrace area. 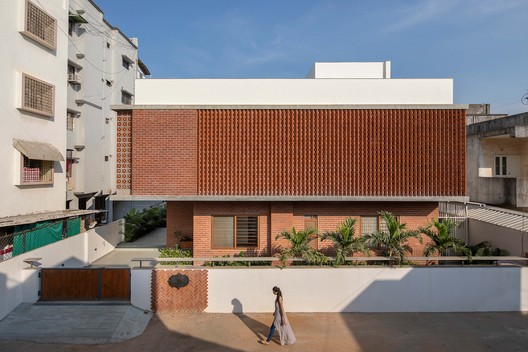