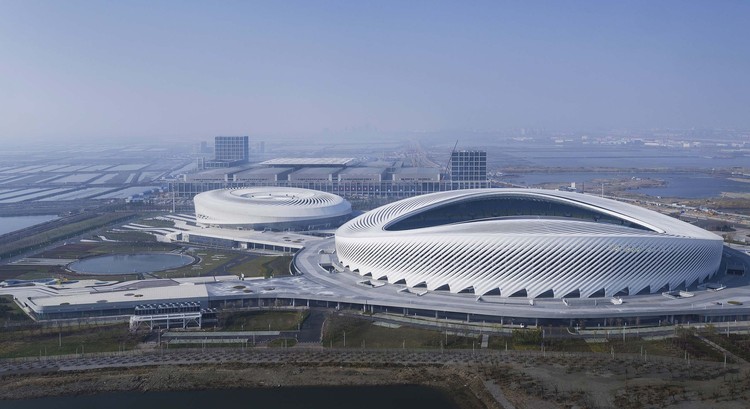 Project Overview
Qingdao Citizen Fitness Center is the venue project for the 24th Games of Shandong Province. The first phase of construction mainly consists of one stadium, namely 60,000 stadiums and 15,000 gymnasiums.Located in jiaozhou Bay coastal area of Qingdao city, the project is located in the geographical and geometric center of Qingdao city, airport, high-speed railway station and other regional transportation hubs. Together with 13 municipal major projects such as Hongdao Convention and Exhibition Center and Jiqing High-speed Railway Hongdao Station, it constitutes the public center on the north shore of Qingdao.

Since its completion, Qingdao Citizen Fitness Center has not only hosted the 24th Games of Shandong Province, but also hosted the national team after the games Men's and women's basketball, volleyball and so on several international events and variety of activities, also recently successfully hosted the as epidemic prevention and control under the domestic first restart the big sporting events, the Chinese men's basketball professional league 2019-2020 season (CBA) heats the second phase of 40 games, hardware facilities and events organization conditions so as to obtain the yao Ming, the chairman of the Chinese basketball association organizations such as sufficiently high praise. As the competition center with the largest construction scale, the best hardware facilities and the highest technological content in Shandong Province, in 2019, the center will be open for more than 360 days a year, with an average daily opening time of 8 hours and an open area of more than 80%, becoming the new name card of Qingdao city.

Design Features
Coastal landscape site construction based on Qingdao Marine regional culture
The project is located in the geographic and geometric center of Qingdao, the airport, high-speed railway station and other regional transportation hubs in the urban location, and constitutes the public center of the north shore of Qingdao together with hongdao Convention and Exhibition Center, Jiqing High-speed Railway Hongdao Station and other municipal major projects. Through the multi-dimensional and multi-path viewing from the space nodes of major cities, as well as the line of sight analysis of "seeing" and "being seen" between hongdao Station, a compact layout with moderate separation and non-occlusion is formed, which not only maximizes the urban appearance of venue elements, but also ensures the intensive utilization of land to the maximum extent. The project mainly includes three core functions: stadium, gymnasium and outdoor training ground. Wetland park is reserved in the building layout to form an intensive layout;The large-volume stadium is raised to touch the wetland, and the second-floor sea-viewing platform is built. Do not do basement, as far as possible to protect the wetland landscape.

At the same time, based on Qingdao Marine regional culture poetic construction: through simulating Qingdao Marine biological thread intensive growth structure, the venue space intensive is realized; And it is related to the coastal culture of Qingdao, and with the Marine cultural intention of "cloud", "sea", "sand" and "shellfish", it becomes the landscape logo on the takeoff and landing channel of Jiaozhou new airport that can be interpreted by passengers with multiple meanings: "The sand of the sea" -- the stadium is composed of the roof and facade with light and undulating patterns, which looks like the beach brushed by the waves. "The Shell of clouds" -- the white ellipsoid of the stadium symbolizes the beach shells under the blue sky and white clouds. The stadium is a class A large stadium, which can hold international individual events and national comprehensive events, including competition venues, practice venues, spectator stands, spectator evacuation platforms and event rooms; The stadium is a super large Class A stadium, which can hold international individual events and national comprehensive events.

Intensive space system based on the best experience in competition
[Compact homogeneous Inner Field and Circular Hall]
Each system plane of the stadium adopts the most intensive circular form. On the section, the saddle-shaped curves of the inner and outer cornice of the tent correspond to the profile of the stand that rises from the circular view of the seat. In order to meet the visual quality and the wind speed during the match, the grandstand is designed to form a compact and highly enclosed layout, so that the visual line can not only meet the needs of holding track and field matches, but also give consideration to the possibility of watching football matches as the home of local professional clubs after the match. The front row seats are as close to the match field as possible, both on the plane and in the section, so as to improve the clarity and spatial cohesion of the spectators watching the core football match.

The ring around the stand to the hall maximizes the reduction of the distance from the audience to the entrance: the audience enters the hall through the "pointed ticket" shaped entrance which is evenly distributed to the circle and reaches the corresponding entrance of the stand area of the pool; Vertical traffic adopts steel structure straight running stairs with stronger guidance, which is uniformly arranged in accordance with the twill direction of the outer curtain wall and leads the audience into the four-storey block.

The lower roof of the competition hall in the middle of the stadium allows viewers to view the screens, focus their eyes on the field, and reduce the energy consumption of air conditioning. The roof adopts radial radial steel beam and cable system, which forms a strong sense of centrality with the ring horse way and bucket screen. The ring hall adopts four groups of "double layer vertical superposition type" straight running stairs "tube body", the interior is fire stairs, directly leading to the outdoor platform, on which an open staircase is formed, leading to the four-storey building block. This kind of transportation means that cleverly combines the fire protection and public facilities is convenient to guide the audience and greatly saves the interior space.

Stadium by stadium also enhances the identity of the internal space through the high purity color and identification system. The four colors of "green", "red", "blue" and "yellow" are used in the color design of the stadium ring hall. They are respectively used in the four stand areas of the ring Hall in the east, west, south and north, symbolizing the urban elements facing the base in the east, west, south and north -- Qingdao, Red Island, Dahai and Huangdao. The color of the stands is gradually transferred from the yellow of the beach in the pool area to the blue of the ocean in the building area, which not only improves the orientation identification of the audience, but also integrates the regional culture of Qingdao and the sports temperament of the sports architecture. The competition hall in the stadium is a Mosaic of red and yellow colors, which respectively represent the red island and the Yellow Island.

[Concise and clear external valance system]
The outermost layer of each stadium consists of two floors, both of which are composed of an external curtain system extending from the facade to the roof, covering the ring hall and the grandstand space. The inner layer is steel structure, and the outer layer is continuous facade curtain wall and metal roof canopy. The roof steel structure system is a suspension structure composed of rigid steel beam and cable. The roof drainage adopts an inner ring rain ditch, a built-in siphon rain water mouth, and two overflow gutters leading directly to the outer curtain wall, which fully guarantees the safety of the roof structure. The air inlet and exhaust shaft uniformly arranged on the top of the audience lounge penetrates the metal roof in the way of vertical shaft, and is hidden in the cavity under the aluminum plate layer above, ensuring the continuity of the roof and facade.

[Sustainable Complex Venue]
In the design, the possibility of convenient transformation and operation after the race is fully considered from the perspective of functional matching and spatial layout. Stadiums and arenas can be used for individual international and national competitions, including athletics and football. The grandstand mainly consists of pool, box and building areas, and the lower base is the event room for VIP, media, judges and athletes. The building adopts a 12-18m long column network, which is conducive to segmentation. After the match, it can be transformed into a room for football matches and a conference center. The balcony box on the floor of the building can be used as the office space of the operating unit at ordinary times.

The multi-functional layout is adopted in the competition hall of the stadium, which can realize the multi-functional transformation of basketball, gymnastics, handball and other competitions as well as the convention, exhibition and performing arts through the change of telescopic seats in the pool block area. The removable seating area in the floor and the exercise hall at the bottom of the stadium are used for spectators and athletes' warm-up areas respectively during the competition. After the competition, they will be converted into a public fitness space.

The platform is also responsible for the evacuation of spectators in the provincial sports, and has now opened to the public, becoming a beautiful sea-watching fitness trail in the air. The large space up to 8m at the bottom of the platform can also be "returned" to the public after the game, and transformed into commercial operation space such as maker office, boutique hotel, catering and entertainment, sports business gallery, ocean exhibition hall, etc., to form a comprehensive sports block with immersive experience 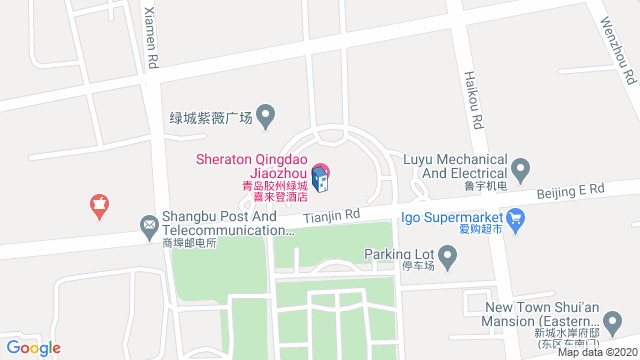 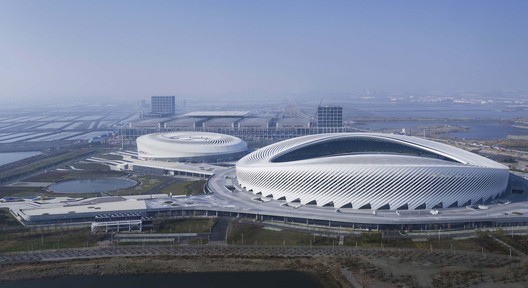