Archi-Tectonics has designed the master plan for the Hangzhou Asian Games Park for the 2022 Asian Games, as well as two arenas. Nearing completion, the tennis table and field hockey stadiums have topped out bringing the 116-acre complex into its final phases. Once the Games end, the new interventions will adapt to new uses, “becoming a signature public recreation complex for the city”. 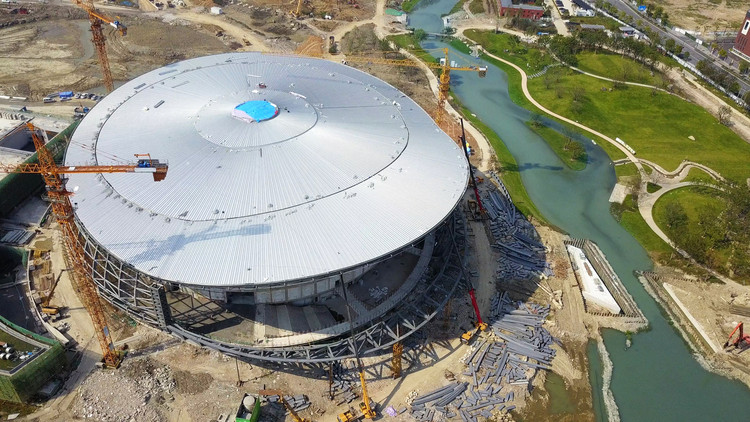 Archi-Tectonics have imagined a mile-long park and two stadiums for the largest international multi-sports competition after the Olympics, the 2022 Asian Games. With both encompassing 5,000 seats, the tennis table and field hockey stadiums are almost ready to host the competitions. The firm received the commission for the project after winning an international invited design competition. The firm developed the masterplan and designs in collaboration with !Melk Landscape Design and Thornton Tomasetti Engineers. Construction is scheduled to complete in 2021.

Without a plan for the future, projects like this risk becoming white elephants—unused, expensive to maintain, and disruptive to a city’s fabric […] We planned Asian Games Park with Hangzhou’s future in mind, designing it to become a fixture of daily life in the neighborhood, support continued urban growth, and make for a more sustainable and resilient city. -- Winka Dubbeldam, Founding Principal of Archi-Tectonics.

During the early stages of the design, Archi-Tectonics “studied legacy public programming options to ensure the complex remains an active center of urban life for decades to come, designing the park and buildings to easily accommodate these future uses”. In fact, the tennis table stadium was designed with a hybrid seating system combining stadium and amphitheater seating styles, while the field hockey stadium will be adapted for outdoor gatherings. Serviced completely by public transit, the project also incorporated 645,000-square-feet of parking space underneath the park. Moreover, Solar Wings power an outdoor lighting system, “allowing the park to be safely and comfortably used for public recreation at night without increasing its carbon footprint”.

Discover more below the different components of the project, from the official description.

Archi-Tectonics conceived the complex—which is set in a bustling skyscraper district—as an eco-village, a blend of social landscapes, community buildings, and landforms that double as sustainability infrastructures like man-made nature reserves and waterways. By integrating with the city’s existing fabric, the eco-village extends the activity of the streets into the landscape and acts as an ‘urban sponge’: a green lung that collects, filters, and re-uses storm-water runoff.

The design places the two stadiums at either end of the mile-long linear site and connects them with a promenade sunken below grade. Digging out the promenade makes it possible to shape the surrounding park into a landscape of rolling hills and wetlands without bringing in additional soil, adhering to a ‘zero-earth’ strategy to minimizes the environmental impact of construction. Several of the new hills function as nature reserves, promoting biodiversity and ecological conservation.

The promenade itself, called Village Valley Mall, passes under an existing roadway to create pedestrian connectivity across the site and is lined with shops, restaurants, cafes, kiosks, and outdoor gathering areas, positioning it as the social core of the eco-village. Sustainability measures are incorporated throughout the valley: store pavilions are topped with green roofs, custom-designed Solar Wings shade outdoor gathering spaces while generating electricity for the park, and permeable pavement minimizes storm-water runoff.

The architectural centerpiece of the complex is the 365,000-square-foot Table Tennis Stadium with seating for 5,000 guests. The design of the stadium is inspired by the Cong, an ancient Chinese jade-stone artifact associated with the Hangzhou region that takes the shape of a square tube with a circular bore. Using this geometry as a starting point, Archi-Tectonics embarked on a parametric design process to determine an optimal shape allowing the stadium to efficiently convert from a sports arena to a performance venue. The final design creates a bamboo clad bowl that merges arena and amphitheater seating schemes, allowing the stadium to adapt the central viewing layout preferred for sporting events into an asymmetric, stage-centered configuration for performances. Secondary program spaces like restaurants, VIP lounges, and retail areas are incorporated throughout the building, creating a layered and dynamic environment that—more than just a container for viewing sports or performances—serves as fully-equipped events and entertainment destination.

The stadium features a diagrid facade, an innovative approach combining lateral- and gravity-load bearing resistances into a single diagonal grid system that eliminates the need for columns. The curving facade encloses a sweeping, light-filled lobby that wraps around the entirety of the building and accommodates large crowds entering and leaving. Archi-Tectonics used BIM in coordination with the structural engineer and local fabricator to test how different module dimensions impacted the cost, constructability, and visual effect of the facade. The final design—which uses 10" x 20m straight glass panes to achieve the curving effect—is optimized for materials efficiency and ease-of-construction.

At the opposite end of the park, the 5,000-seat open-air Field Hockey Stadium is defined by its translucent wing roof. Inspired by the structure and materiality of the traditional oil-paper-and-bamboo umbrella, the wing roof shades the stands, field, and entrance plaza while introducing a sculptural element in the park. Working closely with structural engineer Thornton Tomasetti, we prototyped and tested several iterations of the wing roof, arriving at an ultra-lightweight structure that makes possible its 410-foot free span.

The playing field itself is set into a recessed oval-shaped grass plain that doubles as a landscape feature and can be converted to host outdoor events after the Games end, including concerts, night markets, and community gatherings. A curving glass facade encloses the lobby, supported by engineered hardwood and steel that creates a dramatic interplay of light and shadow. These high-tech forms and materials are softened by more traditional finishes—like the bamboo-clad interior walls—that make for an inviting interior experience. 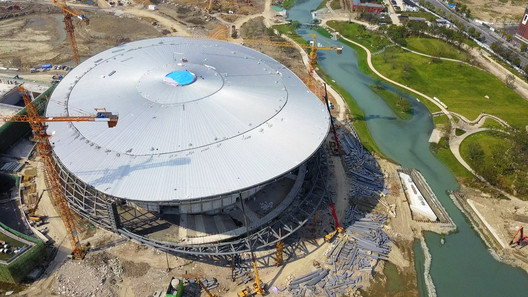