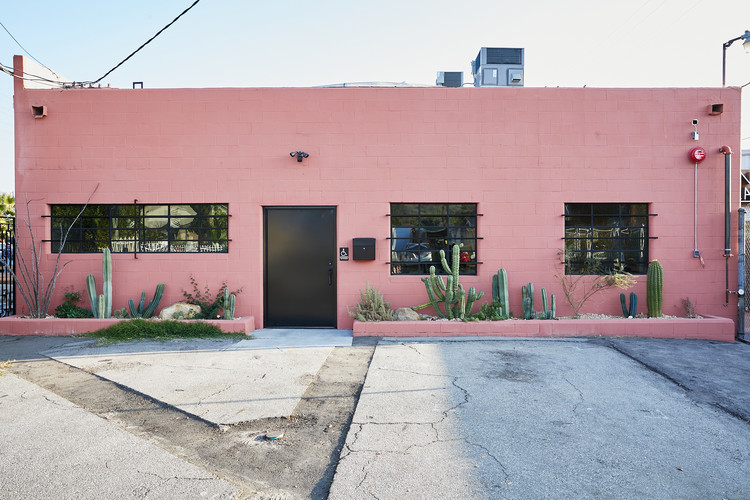 Text description provided by the architects. The project is Phase 1 of the Lazy Eye production studio project in the Frogtown district of Los Angeles. Built within the shell of an existing 4,957 sq. ft., single-story CMU (Concrete Masonry Unit) block building, Phase 1 of the two-phase project focused on a creative office build-out of the front portion of the former warehouse. Completion of Phase 1 delivers 1,325 sq. ft. of newly-designed space comprised of a common work area, a conference room, two offices, two editing bays, and a kitchenette.

Within the sandblasted, pink-primed exterior of the Lazy Eye production studio, the designers demolished all existing interior walls and partitions in order to create a blank canvas. Existing concrete floors were then ground, polished, and finished with a matte sealant, and original wood trusses and joists of the building, built in 1932, were sandblasted and left exposed. Sections of the original CMU block wall were also maintained internally, with sandblasting exposing non-uniform, pinkish-red tones that express the building’s history.

The design tandem established a horizontal datum line within the framework of the structure’s rejuvenated historic charm, marking a delineation of materials applied to space’s newly constructed walls. The abundant use of book-matched white oak paneling adds a contemporary feel to the lower interior, with stucco applied above the line and jutting slightly outward as if resting on the wood. Along the new stucco wall at the rear of the building, a mounted black steel inset also respects the datum line.

The functional areas are organized around an open, communal working space, with enclosed offices and editing bays designed along the perimeter. Abundant light permeates the enclosed spaces through a combination of industrial lighting and custom-built circular skylights. The conference room’s stucco ceiling cap features three circular skylight cuts, each embedded with a cylinder housing a suspended pendant light. By day, the skylights infuse the room with an abundance of natural light, while the pendants emanating from the same location assume that role at night. In all, 14 industrial light fixtures were imported from UK-based Trainspotters, which the design team rewired and installed in accordance with the specifications of the project.

The nature of the work to be conducted in the client’s editing bays required a different lighting scheme altogether. In order to provide less direct illumination, the team designed a lowered ceiling plane, clad in stucco, which conceals hidden perimeter cove lights. The cove lights are directed towards the CMU wall surface, resulting in lower intensity reflective lighting in the rooms.

Further integrating the blend of old and new, Wick and Lindley custom-designed a series of steel-framed glass doors and windows as a contemporary interpretation of the building’s existing vintage steel warehouse windows. Tempered glass doors with thin black steel frames embrace the vernacular of that classic style, combined with the overall modern design aesthetic of the project.

Phase 2 of the design project will consist of retail space, a market, and a restaurant featuring outdoor dining in a tree-lined setting. 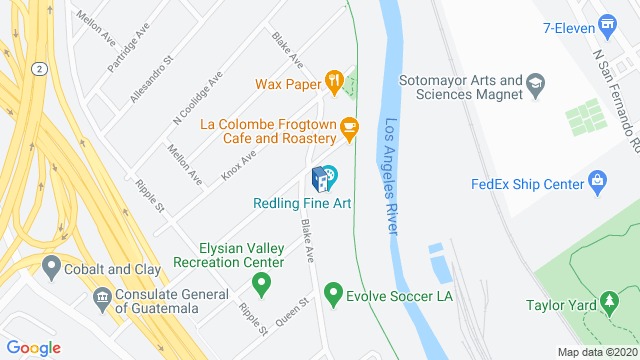 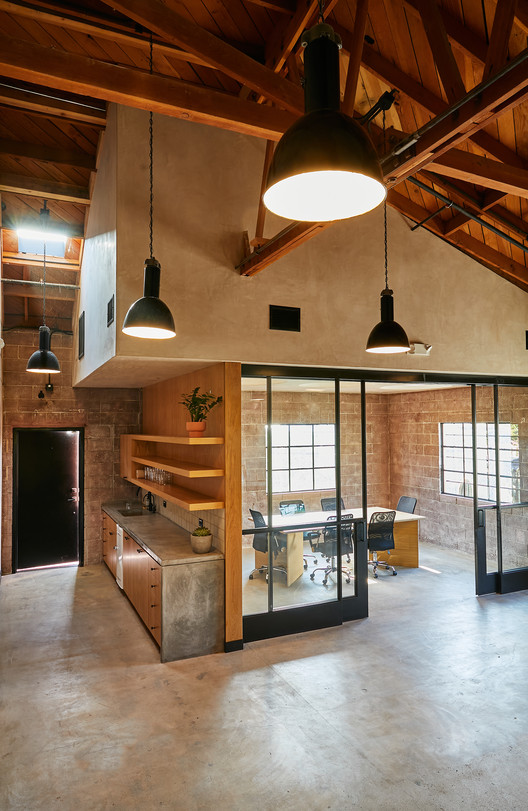