Lego China has teamed up with CAA Architects to create a vision for a modular city in space. Designed by Liu Haowi, the city is made with a spacecraft below and a larger urban center above surrounded by an artificial gravitational field controlled by AI. Called "Crystal Space City", the project is constructed by modules and combines a city, oasis and an energy power system all together.

The Crystal Space City project acts as a carrier that can move, while at the same time, the spacecraft design provides power to "travel around the universe" without using all of its energy reserves. As the team states, the "energy crystal is controlled and adjusted by AI in the vast universe. It uses gravitational accretion to capture the surrounding material energy for its own use." As CAA outlines, the design aspires to pave the way for an ideal human habitat in the future.

"When the physical world superimposes with the virtual space, when the reinforced concrete city grows into the organic life body, when human beings truly break through the three-dimensional space and enter the multi-dimensional universe...Crystal Space City can become an ideal habitat. It is a mixture of lives that can move freely through the universe and usher in a new urban civilization." 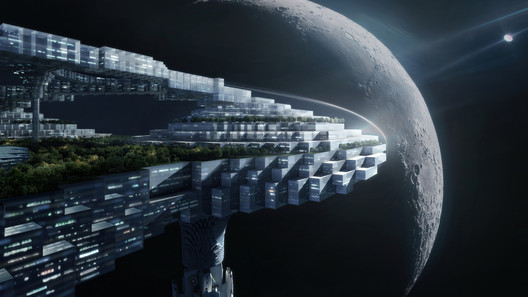