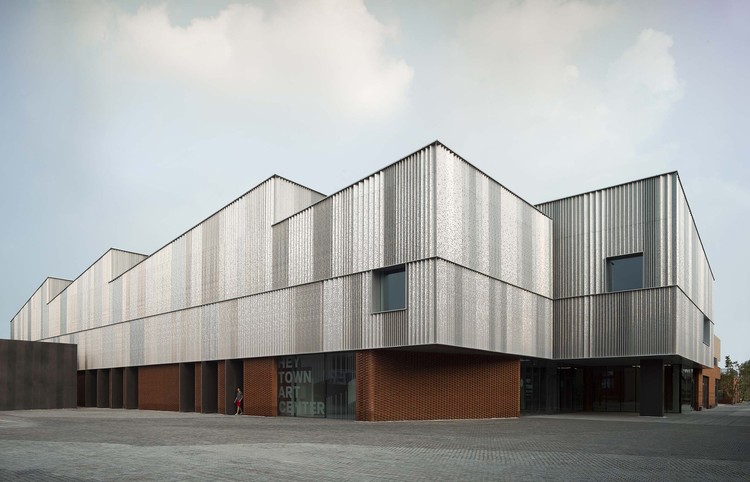 Text description provided by the architects. How to regenerate in urban fields where the collision of old and new culture happens? This project tries to bring up an answer for how to grow an effective cultural landmark that links to the past at the same time functions well for the ever-shifting contemporary urban landscape.

Background
The site is located only 5km east to Beijing’s CBD, and is right in the middle of an isolated and forgotten diamond-shaped land intersected by serval railroads and divided into fragments. While the rest of the city undergoes a rapid development, this urban enclave hidden in some declining industrial plant buildings have remain uncultivated in the past 3 decades.

The client’s long-term goal is to regenerate these spaces though bringing in cultural and creative industries, so that it connects the surrounding neighborhoods currently separated by the railroads, and gradually building up a mixed-use community of 140,000 square meters. As the lead architect for the 2nd stage of the community, we try to revitalize this urban enclave through weaving together retail, recreational, F&B, and creative spaces for people with different needs. This Art Center was proposed in the core of the creative industry zone that infused diverse public program into a larger mixed-use community.

Design Strategy
Our approach starts with answering the question of "How to transform an industrial space for productivity, to an art space targeting public engagement". We work with the client and the local government together to eventually agree upon a rational design strategy that we brought up -"spatial prototype shift”: which appropriates the prototype of the saw-tooth shaped plant buildings, and adapts it to suit for the multiple program for the art center, and then translates it into a new composite spatial prototype designed to maximize the creative vitality that it will generate for the urban block.

The exterior architectural presence is characterized by a perforated-folded metal cladding with saw-toothed volume that grows out of the shape of a plant building, and gradually extends forward, twisting at the end as it almost touches the elevated railway, forming a sense of ephemeral levitation. It also enriches the surrounding neighborhood's dull skyline, not only with its decisive shape but also with its echoing to the ever-changing skylight.

Materialization
To re-conceptualize the industrial past in a contemporary context, it is translated into the combination of 3 threads of materiality: the metal cladding that shifts between reflectivity and translucency interpreting the contemporary cultural sensitivity; the shadowing surface of red brick wall responding the historic character of the site; the large transparent glass openings and large pivot doors revealing the "inside" of the vessel to the public.

HeyTown Art Center features an aluminum façade wrapping around the entire suspended saw-tooth volume. Instead of perusing a smooth and sleek image of a definite "newness" that the usage of metal usually bring to such context, it was taken as an experiment on potential ‘natures’ of the aluminum: minimum angle of folding, jumping rhythm of corrugations, different ratio of perforation, extreme strength of the metal for vertical span, enhanced reflectivity…all together to achieve a tangible and frictional experience of the architecture that is in constant "dialogue" with its surroundings, and to create a tension from the site's past towards its future.

In the daytime, the folded cladding brilliantly captures the changing light conditions with its varying angles, like a series of prismatic mirrors echoing the sky. At the evening begins, the semi-reflective volume starts to illuminate itself and the cold reflection gradually turning into warm translucency from the top to the bottom. The constant overlapping of such ambiguous light experience throughout the day, adds an elusive narrative to the spatial context.

Program
The building, with 3,300sqm, consists in three basic segments: entrance hall with HeyGallery on the second floor, connected through a large spiral stair; central space that switches between a theater with 500 seats or open up as exhibition space with a series of large pivot doors opening to the plaza; back of house zone with function rooms. In addition, there are also a bookstore/shop, an art education studio, a double-floor linear gallery, among many other support spaces.

Such spatial arrangement is assembled to maximize the adaptability to different scenarios of indoor-outdoor program. Since its official opening in August 2020, a series of public/art activities have been launched in HeyTown Art Center: YiXi speech, Feinaki 2020 Beijing Animation Week, "ODE to life" - MODERN SKY Conference , contemporary art exhibition, drama performance, urban renewal forum, Beijing International Design Week, etc. These activities are then connnected into a "Symbiotic Cultural Festival" which continuously radiates its energy to the city.

Connecting to the city
With connecting the pedestrian passages under and along the urban infrastructure - several railway lines, HeyTown Art Center joins together multiple public access. Through the density of the events it generates, the art center weaves together surrounding public amenities for people with different needs. With the plaza to its side provides more open space where people can spend time for curated community events and daily activities, they double as the cultural core of a larger urban regeneration zone, and become a "social condenser”.

Conclusion
After 30 years of hyper urban development, Beijing has been slowing down in recent few years, and moved towards reinvigorating some of its missing parts. We work with the client at this particular moment, attaching great meaning to the art center's striking silhouette, seeing it as an engine to one of the city's new creative industry district.

The HeyTown Art Center works as a complex of exhibition space and performance space, it gathers people from all over the city and invigorate the community through arts. The surrounding neighborhoods benefit from the integration of the public events, and get to rebuild their everyday life towards social coherence.

Seeing from people's enthusiasm to it since its completion, HeyTown Art Center has already been regarded as the core engine that drives the urban regeneration in the area. All together It makes the project much more than just a place for Arts - it is a place for gathering and sharing in a city scale, and an anchor point of the urban renewal in Beijing. 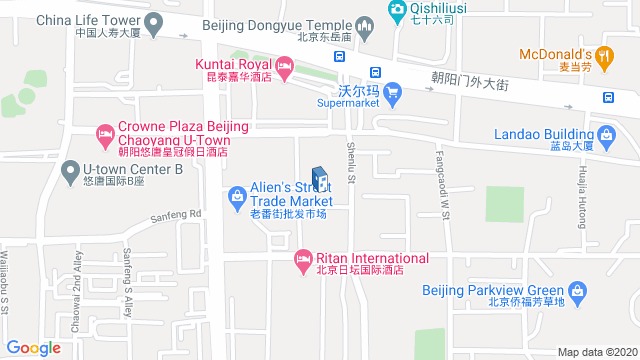 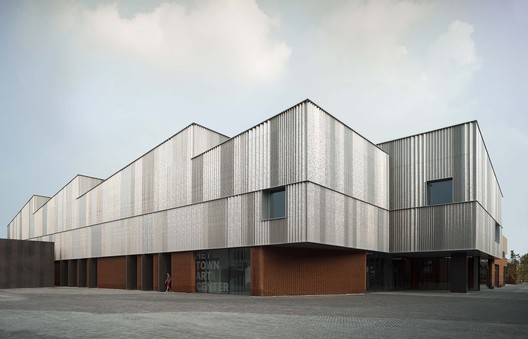