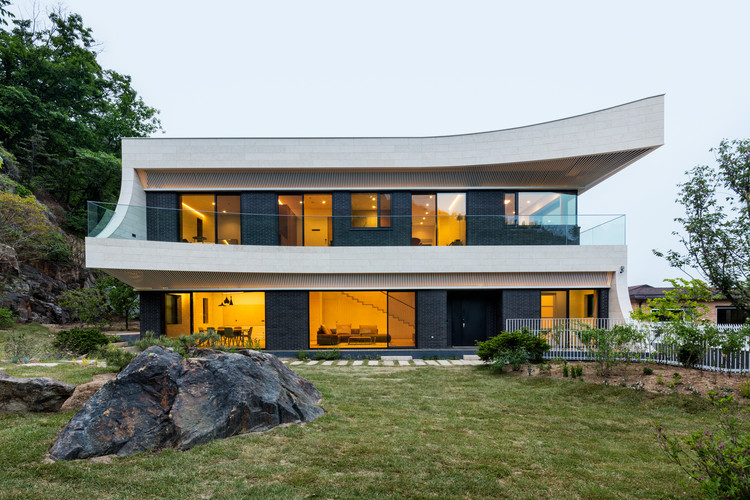 Text description provided by the architects. Eaves house, a home for a couple in Gwacheon, portrays how to re-interpret traditional Korean eave typology to achieve high environmental and aesthetical standards. Located in between Gwanaksan Mountain and Cheonggyecheon Mountain, the site offers a panoramic view of its surrounding mountains. The project aims to achieve an architectural outcome where the balance between nature perseverance and spatial experience coexist. Additionally, a continuous interplay between light and shadow along with various scenery interchanges are expected to tag along in the process.

Space, an articulation of nature - Designed to provide an optimal indoor environment for living, Eaves house promotes uniquely strategic narratives, establishing a homogeneous perception of the two mountains and the surrounding housing complex. The curves, inspired by the curvature of the surrounding mountains, reflect as an extension of the surrounding landscape with vista opened towards the sun-lit Southeast.

Large windows allow various exterior features from season to season, while the central skylight provides natural lighting yet functions to support hot air ventilation. Respectively, shades are formed through the naturally established eaves at both ends, filtering daylight through the vertically composed stainless steel pipes beneath. The Peak of Gwanak Mountain and Cheonggyesan Mountain, extended beyond the Gateway Park, is connected here through streams of lines.

Eaves, the evolving hereditary paradigm - The eaves, highlighted as the main feature of the design, were inspired radically by the Korean Traditional Roof (Cheo-ma). Structured underneath are white-painted stainless pipes, patterned respectively as reflections upon the original Korean traditional aesthetics. The design re-interpreted the structural function to suit the modernized era. These composed lines filter sunlight in the daytime while controlling light emission from installed lightings at night.

On the other hand, the counter to this specified adaptation is also seen as a strategical approach from the architect’s perspective. Below the eaves, the residual areas are brought forward as a focal balcony on each side, serving the respective spaces. One caters shade to the kitchen area, while the other extends the perimeter of the study area. Hence, the in and out relationship between the two realms of nature and architecture is considered boundless, intervening one another by the presence of these perceptual intermediate spaces.

Passive Housing - Eaves house is sealed off with a high-level airtight construction and insulation, internally isolated from any external intervention. In supporting inhabitation, the house adopted a Passive Housing Standard to circulate essentials energy within. The introduction of the heat recovery system (HRV) supports the realization of high-performance ventilation and air filtration to the house. In the basement, low noise filters were installed, drawing in toxic exhaled air from inside while circulating fresh air from outside throughout internally. These measures effectively reduce the annual energy consumption of the client through design and construction. 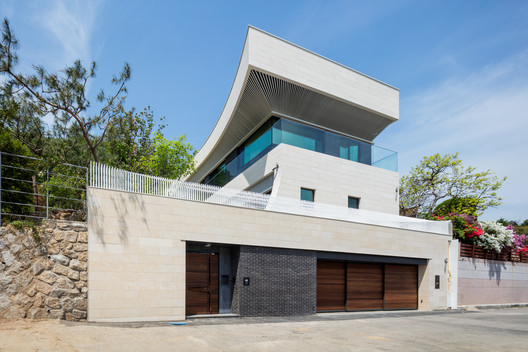